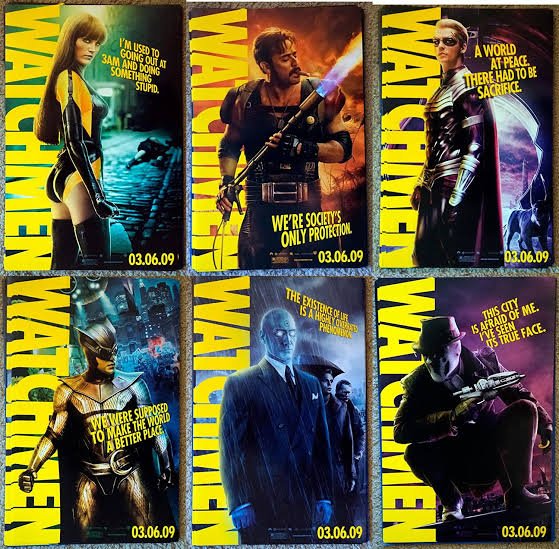 Christopher Nolan was right. This movie indeed came out too early.

Watchmen is a 2009 American superhero film directed by Zack Snyder. It is based on the 1986–1987 DC Comics limited series of the same name by Alan Moore and Dave Gibbons.

Before anyone sees this film, Zach Snyder should be given a pat on the back. He did what a dozen directors struggled to do for twenty years: he made a Watchmen movie. It seems unthinkable that anyone could properly put the greatest graphic novel of all time on the screen. But Snyder has done pretty much that.

The story takes place in an alternative 1985, with Nixon beginning his third term as president, and the streets of New York are gritty, dark, and violent. Within New York lives a group of costumed heroes that used to be loved by society, but are now hated by practically everybody. One night a depressed retired hero named The Comedian is murdered by a masked person that breaks into his apartment. Another hero named Rorschach, who wears a mask with shifting ink blots, believes that someone is picking off costumed heroes to begin their own agenda of destruction.

Rorschach begins investigating and hunting down the person that is responsible for The Comedian’s death. Meanwhile we meet another hero who glows blue, and has almost literally become a God. His name is Dr. Manhattan, and although he has the power to save the world he won’t do it because he has lost many of his human emotions.

The other main costumed heroes are Night Owl and Silk Spectre, who begin to fall in love amid the chaos of their secret lives. Any other attempt to describe the complex plot of this movie would be nearly impossible.

Watchmen was an extremely complex graphic novel filled with a lot of flawed costumed characters, strong plot, powerful sense of style, and also contained a world that seems a little too close to our own. The movie carries every one of these elements in the best way it possibly could. It stays true to the novel, and only changes a few details.

The memorable characters are very well portrayed and acted as well. Dr. Manhattan (the giant blue guy) is played very well by Billy Crudup, who manages to keep the character interesting despite his emotionless attitude. Malin Akerman (Silk Spectre II), Patrick Wilson (Night Owl II), and Matthew Goode (Adrian Veidt) are also very good in their roles. However the two actors that truly help add depth and a real sense of anger to the film are Jeffrey Dean Morgan as The Comedian, and Jackie Earle Haley as Rorschach.

Rorschach was probably my favorite character because technically he’s not really a hero at all. He’s a psychopath with harmful and destructive behavior, even though in a way he’s trying to do what he believes is right for the world. He is a fascinating character with his shape-shifting mask full of ink blots that mirror his personality.

The movie takes place in 1985 and mimics what was happening back then. Watchmen’s story revolves around the threat of nuclear war and global destruction, and the characters mostly try to do the right thing for the world but have trouble seeing the point in doing so. This is a great film that stays true to the original graphic novel while transitioning its style, characters, chain of events, and storyline from page-to-screen the best it possibly could. However if you’re not familiar with the source material you may find yourself confused by this movie.

It’s not like The Dark Knight where everybody that goes to see it knows who Batman and the Joker are. These characters are not as famous as those types of household name characters, and may be hard for someone’s whose never read the novel to understand.

Watchmen is a great movie, and despite its long running time of 163 minutes, I never found it boring at all. Watchmen is a fascinating graphic novel adaptation that deserves to be seen by anybody that likes their movies complex, dark, and absorbing.

I’ll Be Watching The Watchmen. Over and Over Again