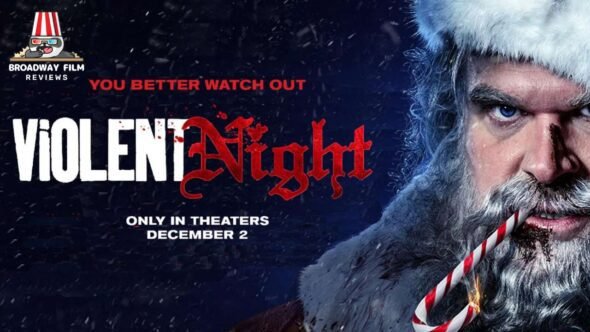 I went without any expectation after watching the trailer, and I have been waiting for a long time for a brutal movie with tons of action.  The trailer promised me. Let’s check out how brutal it is….

When a group of mercenaries attacks the estate of a  wealthy family, Santa Claus must step in to save the day (and Christmas).

When I initially heard about Violent Night, I seriously let out a groan. Here we go with another one of those horrible spoofs of something known & beloved like a Christmas Santa movie but with a

so-called edgy twist. Hell, I honestly thought this was going to be a  really low-budget knock-off movie but I was pleasantly surprised when I went to see it!

For a movie called Violent Night, you’re obviously not expecting to see an Oscar-worthy Schindler’s List type of movie nor are you expecting anything that would take itself seriously either.

I would say that Violent Night is a semi-low-budget-ish Christmas movie with a sprinkling of Die Hard-style action & adventure heroics and a  dash of Home Alone-style comedy and humor thrown in.

You can tell that the filmmakers conceived this movie as a Christmas movie first as that theme runs deep throughout the entire runtime.

Just based on the initial trailers I saw, I was wrong in thinking that this is a cheesy low-budget action movie using the Christmas theme as a cheap gimmick to add a little bit of style but thankfully that is not the case here.

Like any good Christmas-themed movie, this one has a bit of heart that surprised me despite the overt vulgarities on display.

Again, I thought the real gimmick here was going to be that this is a cheesy Christmas-themed action movie made for  “adults”. And it definitely is that, but as I mentioned it has just enough heart and earnestness to go along with the adult-oriented humor and violence that you have to give this movie its due

Because this movie is a Christmas movie first & a cheesy adult-oriented action comedy second, you can see why everything worked out. Nothing about this movie screams cheap gimmick or cash-in.

The story is a little hokey, being about a jaded “real life” Santa Claus who has been doing the Christmas spirit schtick a little too long and gets caught in the wrong place at the wrong time but this is what makes it fun.

The vulgar & rough edges portrayal of Santa Claus by David Harbour goes a long way to selling the movie’s theme because the character is played with just enough flaws but not so much that it becomes cartoony.

Also, Read Lyle Lyle Crocodile (2022) Movie Review: It’s not the best as “Stuart Little” but it has few moments for your time with your kids.

The villains of the movie, lead by head goon John Leguizamo are just menacing & mustache twirling enough that you root for them to be defeated and for their plans to fail but again it is done in a way that doesn’t destroy the audience’s ability to buy into the proceedings given the premise.

There are equal amounts of menace to each of the villains that are attempting to rob the estate they are invading but there is also enough humor thrown in at the right times that it never feels like the movie takes itself too seriously or goes way over the top.

The heart and soul of this movie however is the young girl Trudy, who insists on believing that David Harbour’s Santa Claus is real and not an urban legend or myth. The interaction between Trudy & Santa Claus has enough warmth to it that you can play along but not so melodramatic that you cringe.

As I mentioned earlier the filmmakers and everyone on screenplay things just right and with enough earnestness that you can’t help but give the movie a chance.

The concept of being on the nice vs naughty list and all the usual Christmas tropes come into play with the story and again, I can’t stress this enough, isn’t stretched to a point where you would scoff and laugh.

All of that being said, if you’re looking for a fun Christmas movie with a  good dose of action & humor thrown in and made for an older crowd then this is one I recommend seeing!

As long as you go into this movie knowing what it has to offer and you’re not looking for an Oscar-seeking movie or something more in line with what you would typically associate with a Christmas movie, you will have a good time at the movies!

It’s definitely a fun escape and provides a nice respite from all the madness that comes with celebrating the season of joy and that is all that I think anyone can ask for from a  movie like this!