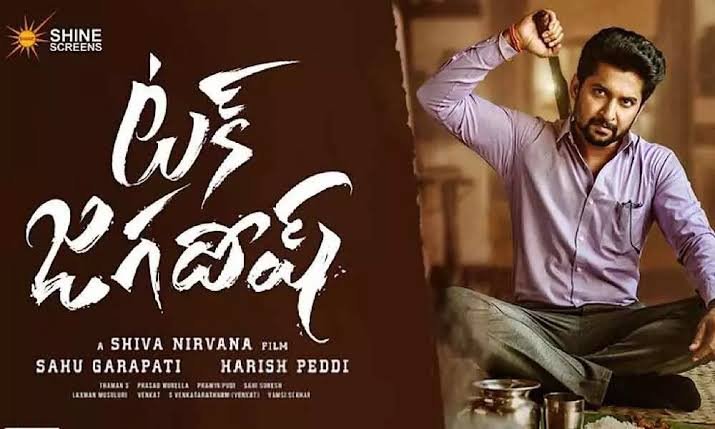 Aadisesh Naidu, is a well revered man living with his family in a village known for greedy property fights among the families. His elder son Bosu Babu and younger son Jagadish are loving brothers. After Aadisesh’s unexpected demise, Bosu Babu turns against Jagadish and wants to grab his property. How Jagadish reunites his family and carries on his father’s legacy forms the plot.

Tuck Jagadish has made a lot of noise in the last few weeks thanks to its OTT release. The film is finally streaming on Amazon Prime and let’s see how it is.

Nani is the life and soul of Tuck Jagadish. If not for Nani, things would have been quite tough for the audience. Nani owns the character and gives a standout performance. He does not overact and gives subtle expressions. Be it his look, or performance in the family scenes, Nani has owned the role. Ritu Varma is also quite impressive as Gummadi Varalakshmi and gives able support to Nani in the film.

Jagapathi Babu gets a meaty role and he does well in the second half. All his scenes with Nani have been handled well. The supporting cast is pretty impressive as the main villain, Daniel Balaji is another highlight. He brings a fresh feel to the film but is not used well in the latter part.

The first half is filled with neat family emotions and the twist brought in during the pre-interval is also neat. The interval bang gives you a high and Aishwarya Rajesh does a decent job in her role. Naresh, Rao Ramesh, Rohini, Devadarshini are decent in their roles.

One of the major drawbacks is the lack of novelty in the story. We have seen so many films with issues between siblings and Tuck Jagadish is no different. Nani’s character takes a new route post the interval and his role is established with so many unnecessary scenes which kill the interest of the audience.

The mother character is the main pillar of the film but the choice of Parvathi T is completely wrong as her role and the way she failed to hold the screen is one of the biggest drawbacks. A powerful and known actress would have made a lot of difference.

The whole Aishwarya Rajesh angle is age-old and has been tried in so many films earlier. Director Shiva Nirvana has told in his interviews that the screenplay will be new but that is not the case as the film has some deviations.

The production values of the film are pretty good as the able camerawork showcases the film in a beautiful manner. Thaman’s music is decent but the BGM by Gopi Sundar was below par. Editing is strictly okay as some key scenes of Nani in his new job should have been chopped off. Production design and the way Nani has been styled are quite good. Dialogues are neat but the screenplay was dull.

Coming to the director Shiva Nirvana, he has done a pretty ordinary job with the film. He has taken a routine story and given an even ordinary narration. His previous two films, Majili and Ninnu Kori also had simple stories but the emotions were so good. But that is not the case here as the emotions look artificial in key areas and the film is dragged.

On the whole, Tuck Jagadish is a typical village-based family drama that has good emotions and twists in the first half. Nani plays the sheet anchor’s role and shoulders the film with his standout performance. The narration gets bogged down a bit in the second half but the pre-climax and ending are handled well making this film a simple and clean watch this weekend.

A Neat Family Entertainer With Some Clichés