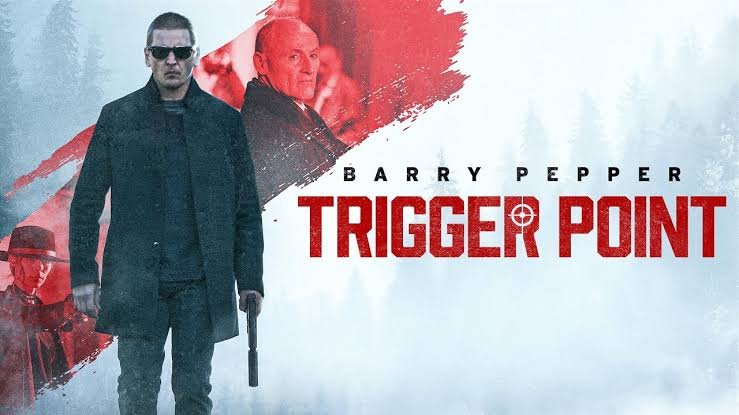 “Pepper is solid as the lead actor.”

Trigger Point is a 2021 Canadian action–thriller film directed by Brad Turner and written by Michael Vickerman.

Nicolas Shaw (Barry Pepper), once a superspy, now lives a quiet life in hiding in a small town, in a secure country cabin. He was a U.S, special forces operative and a member of a vague spy organization called “The Agency.” He was captured by a criminal gang whereby he suffered a  loss of memory when tortured and drugged. This resulted in him supposedly (he just doesn’t remember) giving up the identities of eight of his colleagues and thereby ensuring their deaths.

When Monica Kane (Eve Harlow), the daughter of one of his surviving colleagues, his boss, Elias Kane (Colm Feore),  goes missing, and the same ones who snatched him have snatched her for snooping on them, the disgraced retired military man gets a chance to redeem himself and goes after her–but to do so needs to remember the past, as to where he was taken when captured.

He’s the only one with a chance of saving her because he knows the identity of the elusive crime boss Quentin (Karen Robinson)—the person who may or may not have been responsible for hiring Fiona Shaw (Laura Vandervoort) to do the killings.

Think of this being a low-budget upstate NYC James Bond B-grade film. It had all the right elements to make it work, but failed in the screenplay – that with minor tweaks, could’ve been awesome.

Directing by Brad Turner was great, as was the cinematography. Even the score for a B film was good. The set locations were excellent (loved the house tech). The casting was great, and the performances, although somewhat flat, worked well in creating tension and suspense.

The 85 min runtime flew by, even with the somewhat slow pacing, in part from the perfect scene lengths, decent action, and story progression. I would’ve liked another 15-20 mins of action and character clarity, as well for some parts of the story, along with a little faster pacing.

The story’s premise, although nothing new, still worked well by creating a well balanced focus on both the protagonist and the antagonist. But there were just too many unfulfilled and convoluted plot and technical issues, as well as these random characters popping in scenes with zero character background e.g. The school teacher.

I’m guessing writer Michael Vickerman was trying to create some type of vague character and sub-plot backgrounds that would be exploited in a part 2 of this film, but went overboard with the vagueness to the point you’ll feel underwhelmed and wanting more by the end.

Not Every Films Should Be Masterpiece Or Good, Some Films Will Be Average, Still It Will Entertain You – Trigger Point