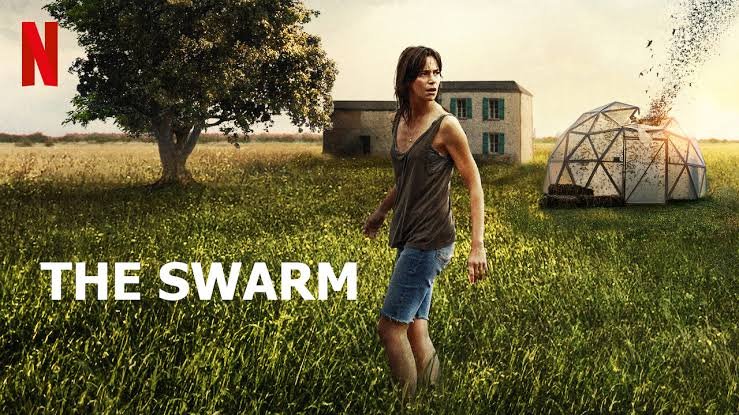 A single mother’s business of a locust farm isn’t doing so well. She discovers by accident that blood makes them thrive, and does her best to hide her secrets.

Virginie (Suliane Brahim) is struggling to stay afloat financially…and mentally, as it turns out.

Her family farm (she used to operate it as a goat breeding operation with her husband, but he hanged himself) is circling the drain.

Her latest venture — raising locusts (us Midwesterners would immediately identify them as big grasshoppers) to use as feed for commercial poultry operations — is collapsing. The damn bugs make a lot of noise but won’t reproduce.

Virginie’s son Gaston (Raphael Romand) is a sweet kid whose life centers on soccer and the one goat remaining from the family’s earlier business.  His older sister Laura (Marie Narbonne), on the other hand, is a seething cauldron of adolescent resentments, fed up with her bullying provincial classmates and desperate to start life anew in a more copacetic environment. She blames Mom for her unhappiness.

Franck Victor’s screenplay devotes the lion’s share of it pages to exposing the tensions in the family.  Virginie is so consumed with making a go of the locust operation that she’s veering into  madness.

She has a supportive friend and tentative  suitor in Karim (Sfian Khammes), who runs a nearby vineyard, but the poor guy is doomed to frustration.  Virginie has no time for romance.

Against these totally believable real-world issues Philippot and Victor poses a Frankenstein-ian dilemma,  Virginie accidentally discovers that her locusts thrive when given a diet heavy with fresh blood.  She tries offering her own body for snacking, but clearly her bug buddies are going to need more juice than she can provide.

Pretty soon the neighbor’s pets and farm animals are at risk (somebody’s been watching “Little Shop of Horrors”).

Given the movie’s title, it’s a foregone conclusion that  eventually all those voracious insects are going to escape their plastic greenhouses and get to chomping.

All this is played with absolute sincerity and not a hint of camp.  Which makes one wonder…is the film’s emphasis on family dynamics going to bore the horror crowd…and will the final conflagration seem simply silly to folks who take their drama seriously? (I mean, they’re only bugs, after all.)

A couple of things keep us invested in “The Swarm.” First there’s the performance of leading lady Brahim, a member of the acclaimed Comedy Francaise who does a fine job of locating the nuttiness beneath an everyday exterior. (She’s also the lead in Netflix’s “Twin Peaks”-ish series “Black Spot.”)

Then there’s the cinematography by Romain Carvanade, who I presume is behind the super close-up shots of the feeding locusts.  I’m not freaked out by creepy crawlies, but if you’ve got a bug phobia this could probably generate a nightmare or two.

A Poorly Written And Unnecessarily Long Family Farm Drama, That Turns Into Bloodthirsty Bugs In The Final Act Attempt To Make Something Interesting Happen