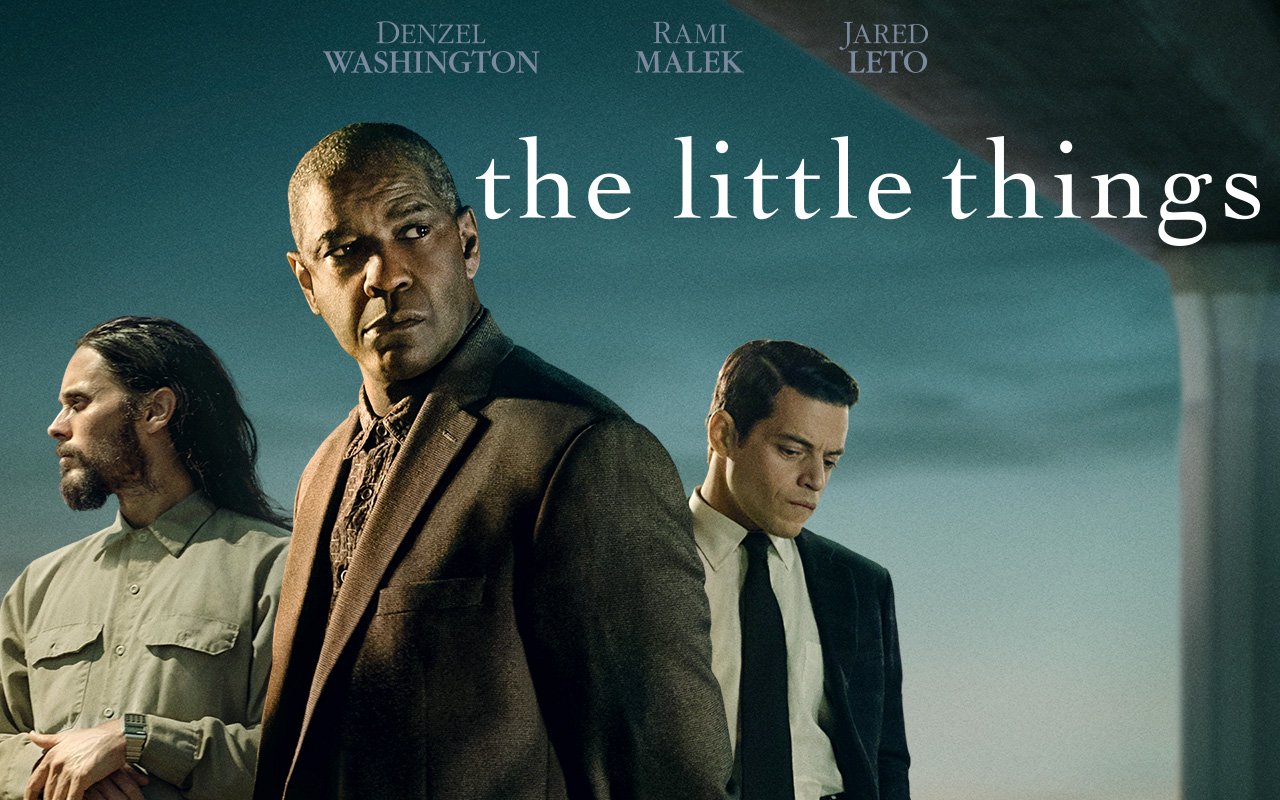 The Little Things is a 2021 American neo-noircrime thriller film written and directed by John Lee Hancock and produced by Hancock and Mark Johnson.

“The Little Things” had a phenomenal trailer, very nuanced, well lit, choreographed, acted, and most importantly, well edited. Of course, the trailer was only two minutes long. How does the actual film, which is over two hours long, compare? Surely any movie that expands on the technical prowess and acting chops that the trailer set up will be fantastic! The movie does expand on all of the pieces the trailer introduced – in doing so, “The Little Things” takes one step forward, and two steps back. Admittedly, the movie looks good visually; the cinematography is appropriately moody, with dim lighting for the majority of the running time that casts an ominous shadow over its characters.

The acting, too, is incredible. I’ve seen mixed reviews on Rami Malek’s acting in this movie, but I thought he was great, if a little mumbly, which did make it hard to understand him (thank you subtitles). Denzel Washington is, as always, great. He puts on a quiet performance here that takes its time with viewers – you can tell there’s something below this character that’s waiting to bubble up. Denzel is a professional, and he acts like one; every word out of his mouth feels believable, every action he takes feels realistic for his character. Watching him and Malik collaborate to catch a killer is truly entertaining – Deke sucks Jimmy into his obsessive mindset, and it’s interesting watching both of them fall deeper into the rabbit hole they’ve dug for themselves.

Jared Leto as the might be, might not be killer is fascinating. Now granted, I may be biased because I like Jared Leto, but I thought he was pretty good in the role. His character was perfectly bizarre, always keeping Deke and Jimmy on their toes. Sure, Jared’s character may act like a complete weirdo, but is he a killer? The movie keeps you, and its characters, guessing, which I appreciated. The story, which obviously focuses on these three characters, is elevated by the amazing performances. In a better film, I could see some serious Oscar contenders.

Yes, I did say “in a better film,” because “The Little Things” does start to fall flat. Let’s talk about the editing – did Olivier Megaton secretly direct this? Who decided on the editing style of this movie? There were a distracting amount of cuts in practically every single scene – for example, a scene where Denzel says goodbye to his dog before getting in his car has probably upwards of ten cuts. Similarly, a scene where Deke and Jimmy are eating breakfast has probably 20 cuts. There is rapid fire editing at play here, and I’m not sure the reason why. The film would’ve greatly benefited from a slow and steady editing style that allowed the camera to linger on its scenes and characters; instead, we get something akin to Paul Greengrass, which definitely doesn’t fit the tone of the movie.

Because of that, tonally, the movie is inconsistent. The pace feels all over the place, with the film only picking up when Jared Leto’s character comes in the picture. Unfortunately, he starts to play a major role about an hour or more into the movie, which means you spend a majority of this film’s length focusing on nothing really memorable. Additionally, the movie felt too short, even though it was over two hours long. There had to be scenes cut out of here, perhaps even scenes that further expanded as to why Deke and Jimmy were so obsessed over Jared Leto’s character. It seems like they pick him as a suspect out of thin air; as you hear in the trailer, they find him suspicious because his car has high mileage. That’s it? After Deke discovers this, they seem laser focused on nailing Leto’s character, and I was wondering if I somehow missed another clue or piece of evidence that made Deke and Jimmy get so fixated.

I did really enjoy the ending and overall message of the movie – this is definitely not a crowd-pleaser, and I commend the so different approach that the movie took. However, I really can’t excuse the awful editing and the stagnant pace. In a better movie, the first hour would’ve been the first 30 minutes, with Leto’s character being introduced early to build the tension and obsession of Jimmy and Deke. However, because “The Little Things” spends its first hour on nothing too significant, by the time Jared’s character is finally introduced you’ll wonder what the movie can possibly pull out of its hat to keep you interested now that it’s almost over. “The Little Things” is a film with great performances and a really interesting premise that is brought way down by its editing, pacing, and tonal inconsistency. It’s a perfectly watchable film, but with this cast, it should’ve been much better than it ends up being.