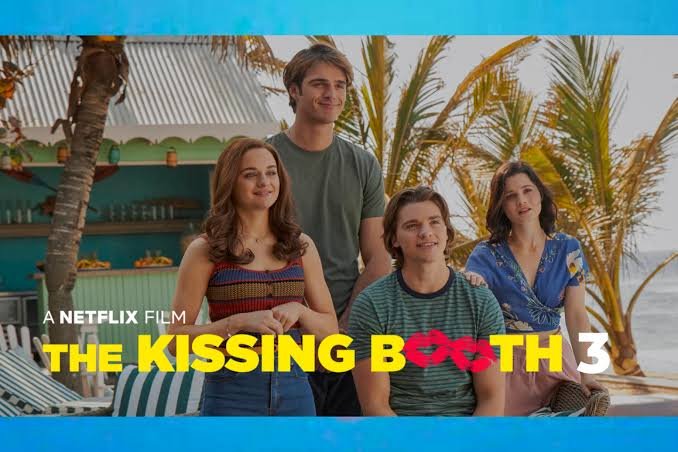 Picking up where The Kissing Booth 2 ended – which saw Elle accepted into both Harvard and Berkeley and having to decide whether to go to school with her boyfriend Noah (Jacob Elordi) or her best friend Lee (Joel Courtney) – The Kissing Booth 3 takes a bit of a detour and sends the trio on a road trip with Lee’s girlfriend Rachel (Meganne Young). Eventually, Elle decides to go to Harvard with Noah, turning down Berkeley and the chance to fulfill the plan she and Lee had for most of their lives.

Feeling guilty over the decision, Elle promises Lee they’ll complete the summer bucket list they wrote as kids, all while living in the beach house their families stayed in when they were young. But her focus on Lee in addition to all her other obligations leaves Elle neglecting Noah, which is only exacerbated when her old flame Marco (Taylor Zakhar Perez) returns. When Elle is stretched too thin and things start falling apart, she’ll have to decide what matters to her most and figure out how to proceed.

The Kissing Booth 3 has too much going on for any of its story beats to land particularly well, whether it’s Elle and Lee’s relationship or Elle and Noah’s, there are too many other distractions to truly develop either dynamic much without some clunky dialogue explaining exactly what’s happening.

Part of that is due to the sheer number of storylines crammed into the film’s less than two-hour runtime, which also includes a thread about Noah and Lee’s parents selling their beach house and Elle’s father starting to date again. It’s also partly because The Kissing Booth 3 spends a great deal of time on summer spectacle, whether it’s the extended montage showing their road trip or another montage of the kids having fun at a water park (and those are only two of the film’s many montages).

While certain sequences loosely work toward moving the plot forward, like a particularly silly scene featuring a go-kart race, The Kissing Booth 3 seems to care more about delivering popcorn fun than a good story. While there’s enough going on to distract viewers from the extremely thin story, the movie’s idea of fun grows tedious rather quickly.

For their parts, it does seem as if the cast had a good time filming The Kissing Booth 3, as they get to enjoy all manner of summer activity, from beach bonfires to days at the water park. This escapism feels especially fantastical as the real world is still in the midst of an ongoing pandemic that has disrupted life for over a year.

Romantic comedies typically offer escapist fun for viewers as they tell sweet stories, but The Kissing Booth 3 also offers a look at an idealized summer very much unlike this year – which, depending on the viewer’s perspective, is either a nice break from reality or a depressing reminder of it.

Either way, The Kissing Booth 3 seems determined to let its viewers live vicariously through the film’s characters, and in that way, those who watch will get to experience the fun summer has to offer. Sort of.

The Kissing Booth 3 is overstuffed and overcomplicated, but provides some shallow summer fun as the final chapter to Netflix’s teen rom-com trilogy.