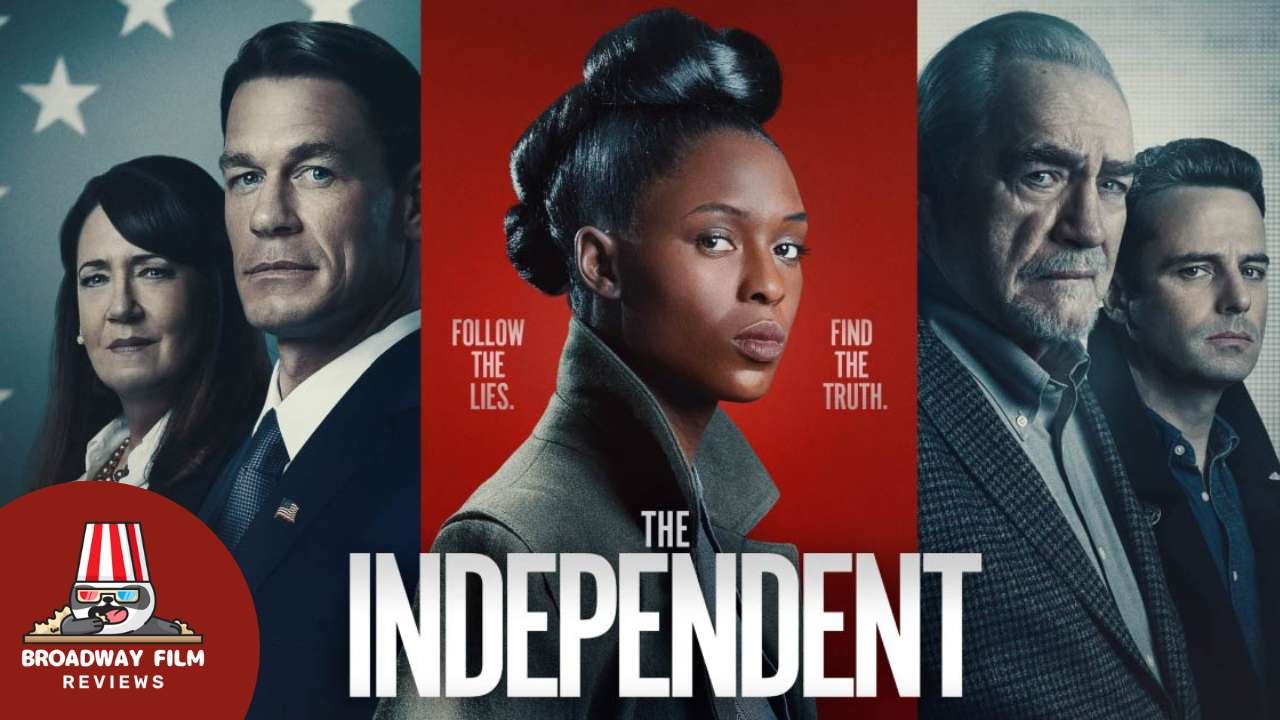 Elisha is a dogged reporter who wants to break front-page news. After old-school columnist Nick teams up with her, she stumbles upon a needle in a haystack thread to a bigger conspiracy involving the most popular presidential candidate in the presidential race, Nate Sterling.

Good political thrillers have been thin on the ground of late, as it’s hard not to revisit the same old areas of corruption & cover-up, that the current reality makes look tame and boring by comparison.

Set in the months leading up to the 2024 United States presidential election, Olympic Gold Medalist Nate Sterling (John Cena) against all odds has become a viable candidate running as an Independent against the two political parties.

At the newspaper The Washington Chronicle, reporter Elisha “Eli” James (Jodie Turner-Smith) is researching a dip in lotto jackpots despite jackpots typically increasing during a recession.

As Eli looks further into the anomaly, she finds connections in the accounting of the corporation managing the lottery with a super PAC working on behalf of Republican Senator and presidential hopeful Patricia Turnbull (Ann Dowd). Eli teams up with veteran columnist Nick Booker (Brian Cox) and the two set out to uncover a far-reaching conspiracy.

The Independent is a political thriller written by Evan Parter, and the feature directing debut of Amy Rice who’d previously served as a staff writer on Aaron Sorkin’s The Newsroom and has some experience operating in the political arena having co-directed the 2009 documentary By the People.

The Election of Barack Obama. Parter’s script appeared on the 2013 Blacklist of best-unproduced screenplays, but it wasn’t until 2020 that the film was announced with Amy Rice directing and Kumali Najiani slated to play the lead until he dropped out with Jodie Turner-Smith taking over.

Now dropping on Peacock a week before election night in the United States, I’m unfortunately disappointed to say despite the proven talent on and behind the camera.

The Independent is rather safe and ordinary and to start off on a good note, the movie is well made with Amy Rice’s direction eliciting some solid thrills and performances from her cast.

Jodie Turner-Smith is solid as journalist Eli even if the script does occasionally call for her to make some pretty boneheaded decisions at points in the story.

Brian Cox is also good as Eli’s mentor/partner Nick Booker whose very much an old-school journalist in both integrity and ethics he’s established as being something of a “man out of time” with how he plans to soon retire and he’s quite good in the role.

Also, Read Lost Bullet 2: Back for More (2022) Review: “Has Over-The-Top Action Sequence but not less on Entertainment”

The biggest surprise however was in John Cena playing political candidate Nate Sterling despite Cena being more known for action-oriented or comedic parts, he does pretty well playing a charismatic “outsider” politician thanks in no small part to Cena’s inherent charisma so it works pretty well for what it’s doing.

I think where the movie falters however is at the core of this story because, despite The Independent taking place in the “here and now” of American politics, it also feels oddly divorced from it as if the script is still operating in the years of 2010-2012.

While there are some references to current events like fake news, conspiracy theories, and 1/6, the movie doesn’t feel reflective of the current political landscape especially when you have candidates who’ve openly spouted or endorsed Q nonsense.

The movie has a very wishy-washy take on politics never really taking any sort of stance on it down to the fact the reveal of the conspiracy is apolitical in nature.

The Independent feels like the kind of movie that should’ve come out around the same time as something like Rendition, State of Play, or Green Zone, and that kind of narrative while still there isn’t really at the forefront of American politics anymore due to the rise of extremists beliefs and conspiracy theories becoming more mainstream.

The Independent despite a topic premise and release date a mere week out from the election is well-made and well-acted, but at its core, it’s a very generic conspiracy thriller that’s completely divorced from the American political scene in which it sets itself.

Instead of making commentary on real-world political hysteria, The Independent creates an easy out for itself that leaves it a pretty toothless affair albeit one that’s not poorly made or badly acted.