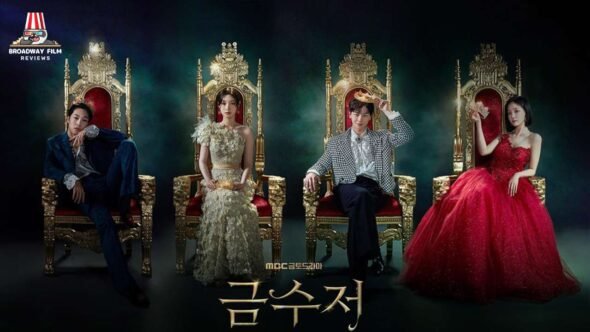 Seung Cheon gets his hands on a magical spoon that allows him to switch lives with his rich best friend. Now he has to decide which of his two possible futures is worth keeping.

The biggest flaw of the story is giving out way too many golden spoons. it kind of reduced the importance of an otherwise powerful selling point.

I will be honest. This is the first Yook Sung Jae series that I have completed. This guy is handsome and has the acting chops to boot.

Here, as Lee Seung Chun, he caught me in his trap from the very first episode.

Something about his pain from being born poor felt effective and believable, and you want him to get out of his desperate situation even if it means somebody else will suffer in his place.

As a viewer, you’d want to give him the best too. To be rich, he has to take the place of Hwang Tae Yong, who at first, seems like a despicable character.

After a few episodes, he managed to switch places, unfortunately for Seung Chun, it is not all greener on the other side as he found out that even the rich Tae Yong has challenges and demons of his own.

Even More Unfortunately for Seung Chun, Lee Jong Won’s good performance as the new Seung Chun is even better than the original, and you can’t help but root for him even more than Sung Jae.

We later found out that there was not only one but quite a few of these golden spoons, which, as I said in the beginning, kind of reduced the importance of the show’s most powerful selling point.

Also, It felt like a lazy attempt to build the show’s tension, to the point that when the last spoon user was revealed, it didn’t have the impact they hoped to create and my eyes just rolled up too high though it left my skull.

It was a waste of a cameo from Na In Woo.

Has anyone noticed how the seemingly good-hearted granny selling these golden spoons is nothing but a creepy Rumpelstiltskin-like character?

She just doesn’t give a sh*t if the spoon destroys lives, she just as long as you buy the spoon.

I would have wanted to see her true evil colors, and that she gives all those who used the spoons get what they deserve in return, which comes to that ending that I hated.

Also, Seung Chun should have been punished (or at least got the karma he deserved) but instead, he got out almost unscathed and looks like he will manage to win the girl after all.

Overall, Would I re-watch it? Probably not, although I’m looking forward to seeing more of Yook Sung Jae and Lee Jong Won’s other works.