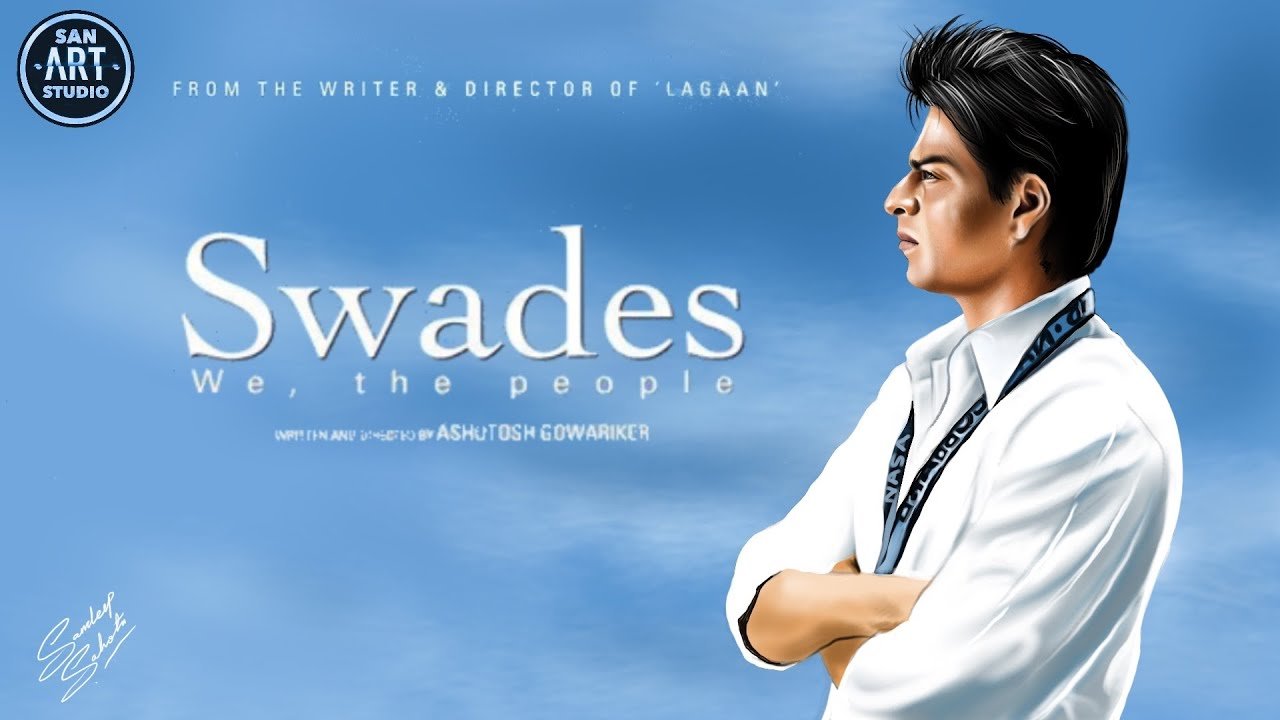 Nothing comes closer to the feeling of watching a good cinema these days & ironic is the fact that seldom there is a genre created for “Good Cinema”. So I traveled back to witness a Good Cinema in our Indian Cinema Library.

Here comes Swades – Ashutosh Gowariker, post Lagaan,. with an optimism unparalleled with his vision & passion., always aiming at the roots of traditional movie making. This time, he brings home one of the most humble yet convincing attempts in Indian cinema., with a script just short of a patriotic saga, characters reflecting India TODAY.

Set in modern day India but taking a village backdrop, Swades is a film that tackles the issues that every educated upper class, specially the NRIs face today – a sense of belonging, Patriotism & having a realistic image of our country. Depicting through a NASA scientist (NRI) & taken the journey through the annals of an Indian village, a quest for finding his childhood nanny becomes an infinite journey that perhaps everyone of us go through metamorphically …

In finding an Indian amongst us.

Mohan, (SRK) a successful NRI working in Nasa, realises the bitter truth of loneliness, often seen in today’s growing spearation of Indians abroad. He wants to go home, nostalgic in search of his missing childhood & all he can remember last is, he is ashamed of losing contact with his nanny, who he holds with great reverence. (Parents die in an accident when he’s young & his nanny has always taken good care of him). In a quest to find her & bring her back to US.,Mohan sets to Delhi in great pursuit & in the interim traces her residence in a distant UP town. What follows later is a series of interestingly woven characters that slowly builds upon a template for the fictional yet realistic characters of this village. The postmaster, a dhaba cook who dreams of opening a “highway dhaba” in US., the playful innocent kids., the beautiful urban educated girl (Gita)., now taking care of his nanny, who has given up everything to teach the children of the village & transform her ideals, the panchayat goons & rajas., the ‘weather forecaster’, the uneducated rest & of course, the wise nanny.

The next few reels bring us close to humanitarian essentials, questioning the very existence of the Panchayat System in the village, debating the needs of an education System, need for working in unision., & the utter poverty, cultural (dis)beliefs of people. Whats so convincing in this script is how the songs are used as an instrinsic part of the storytelling. Never before I have seen a Hindi movie wherein if songs were removed the movie is annulled !! Yet another reason how visionary A. R.RAHMAN can be when it comes to sharing the intellect of his directors, not to mention the first class lyrics by javed akhtar. Some of the background tracks are an absolute delight (the funky starting sequence, the funny dhoti scene, the slow moving boat scene, train scene are some of the elements which cannot be fathomed by any other music director in India (or perhaps in the world).

100 minutes pass by & here comes the intermission – “Damn its been more than one & half hour & I just didn’t realised it!!!”

Just one more reason which convinces you, “Good scripts never tell you how long they are … coz you’re IN it!”

Now., Mohan is trying to convince his nanny to come to US & its already getting late as his leave period is getting over. In the interim there’s a subtle but very interesting chemistry between Mohan & Gita building up. Not to worry.., this is not those typical filmi kinda romances but shot in subtle nice sequences. Another note which can goto all the Directors, Music Video Directors – You don’t need a woman to sport a bikini to look good.., neither you need Aishwairya Rai or Yana Gupta to champion the cause of an “Item No”. The very meaning of beauty lies in our own traditional Saree & you will only realise when you see Gita’s character & visuals in this movie. PERFECT.

The Plot thickens & now we see the transformation is not only in the villager’s to start believing in Mohan’s ideals ., in supporting his ideas… but the audience which by now is beginning to be ashamed of …. what we always have taken into granted – Our Patriotism. For instance, the scene where Mohan goes to a local crowded train. Sees a boy selling water for 25p on the pavement & for the first time drinks water in India (Mohan keeps a stack of mineral water at his dispose) is is crafted brilliantly. (not to forget the background score again).

There are more than one reasons why this movie is perhaps different from other “patriotic” movies., coz it doesn’t try to TEACH you anything. The subtlety, the ironic truth & the bitter, realistic characters makes it all so very close to humanity – you don’t need Shah Rukh Khan to tell you this.

You will feel it shamelessly.

Few more days stay & now Mohan is beginning to question the very reason why he has come here, he begins to realise that what is happening is not correct & its a shame that he has not done anything so far to make a transformation.

Will Mohan finally take his nanny/Geeta to US? Does he make any attempt to make a transformation in the village? Well., whats the message the Director wants to convey ..

These are somethings I want YOU to see & appreciate. The brilliant dialogues of “India Vs US” ., “Parampara & culture .. ” is just an eye opener to all of us who only tend to take things into granted.,

The performances – I don’t quite agree with most people when they say SRK steals the show all the way., I feel Ashutosh steals the show given that he has produced, directed, written & done screenplay for this. Also go due credits to ar rahman, akhtar & all the characters in the film. Mohan’s role is author backed & could have possibly been done by Amir, Ajay Devgan or even Anil Kapoor with equal if not a better flair.But yes, whats convincing is that Ashotosh ropes in SRK for this & gets … what probably is the most honest, *natural* SRK performance ever. For the first time I’ve seen SRK making a successful attempt to be as convincing as Amir or Kamal Hassan & I would say for once., A star has become an ACTOR!

Yes SRK is definitely different in this film & I’m glad !!! I hope he makes more such films to prove that he is definitely a better actor.

In a country where creativity is the last word in Bollywood, I salute the humblest & honest filmmaker of all – Mr Ashutosh Gowariker to have made this movie cutting all the clichés’.