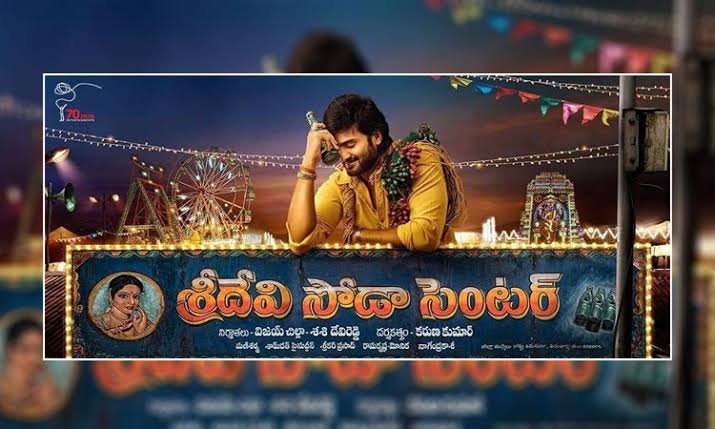 The film is set in Amalapuram and is about a couple Sooribabu(Sudheer Babu) and Sridevi( Anandi). Sooribabu is an electrician who falls for Sridevi. But the caste issue erupts and the couple is thrown into problems by Sridevi’s father(Naresh) and the village heads. How will Sooribabu survive his problems is the basic story of Sridevi Soda Center.

Sudheer Babu teaming up with ‘Palasa’ fame director Karuna Kumar ( main reason I went into theater ) has created curiosity. The film’s trailer and promotion by Prabhas have helped people talking about it.

The story of “Sridevi Soda Center” is clichéd to the most part as we have seen love stories based on the caste issue many times.

Director Karuna Kumar, who made his debut with ‘Palasa 1978’, a film with a strong Dalit theme, has brought nothing new to the board. except for the penultimate portions. He has a ‘twist’ in his armour of screenplay.

He has completely relied on this single aspect of the movie. The entire first half tests our patience as the film runs on a serious tone at a slow pace.

To hold the interest of the audience for close to two and half hours with such a predictable story, the director needs a gripping screenplay and catchy songs (as the success of “Uppena” proved). “Sridevi Soda Center” runs short of these two qualities.

The romantic track between Sudheer Babu and Anandhi also lacks freshness. A hero running after the village belle and getting rejected initially and impressing her eventually is a beaten-to-death track. Still, director Karun Kumar ran on these episodes for nearly 45 minutes in the first half. Of course, there is a mandatory ‘love-making scene’.

Had the love track been narrated freshly, the gripping climax portions would have worked a terrific way.

As we leave the theater, we can only talk about the shocking climax sequence (these scenes are handled superbly, though), not any other aspects of it.

Moreover, the film’s main villain, a newcomer, looks too weak for such a story. The film also shifts its focus from the villain Kasi to another important character. The theme of honor-killing is packaged differently, but the tonal shift seems abrupt.

In a nutshell, “Sridevi Soda Center” is a clichéd story with a shocking climax part. Despite having gripping final sequences, the film is too serious and damn slow.

Senior actor Naresh steals the show with his negative role. He shows his versatility and gives a remarkable performance as heroine’s dad. His character is filled with hatred for the lower caste and Naresh has showcased his hate in a wonderful manner. Satyam Rajesh is decent in his supporting role.

Anandi is also apt as the heroine and does well in the second half. She is a natural performer and does well in all the emotional scenes with Naresh. Pavel, who played the main Villain was also impressive and suited his role well.

Last but not the least, Sudheer Babu once again proved what a good actor he is. In this film, he got good scope to showcase his all-round skills and Sudheer does so well. Be it the emotional scenes or the action part, Sudheer Babu has surely moved one step ahead in his career.

Music by Mani Sharma is decent but his BGM was quite effective. The production values are top notch and the camerawork showcases the small town set up in a solid manner. The film needs trimming of at least ten minutes. Production design is also impressive.

Coming to the director Karuna Kumar, he has once again taken the caste angle post his debut film Palasa. If that film was deeply rooted, Sridevi Soda Center has a bit of commercial angle. The director’s narration in the drama department is perfect but he did not develop the love story effectively and this is a major drawback.

On the whole, Sridevi Soda Center is small town romantic drama with a good backdrop. The rustic characters, amazing climax and impressive performances are basic assets. On the flip side, the film has a dull first half and just a passable love story. If you ignore these aspects, the film has some engaging moments to look out for and makes up for a decent watch.

Interval, Pre-Climax and Climax are the biggest strengths of Sridevi Soda Centre