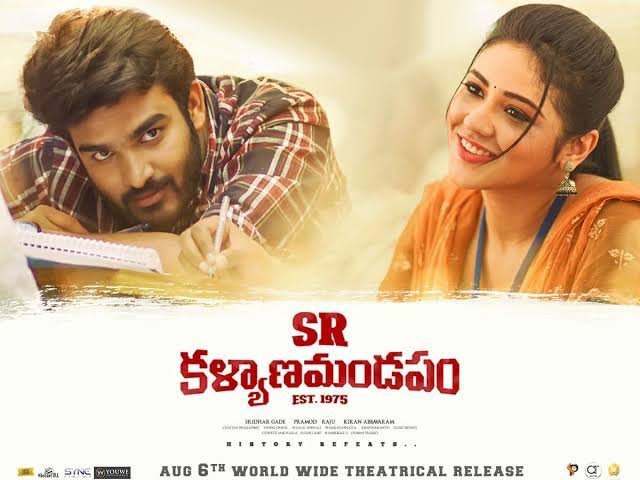 SR Kalyanamandapam (also marketed as SR Kalyanamandapam Est. 1975) is a 2021 Indian Telugu-language romantic drama film directed by Sridhar Gade and produced by Elite Entertainments. The film stars Kiran Abbavaram and Priyanka Jawalkar in lead roles. The music of the film is composed by Chaitan Bharadwaj.

Firstly, I don’t want to say that this film is a disaster. They put enough efforts and it deserves a little recognition.

Now coming to the movie, it’s a below average emotional commercial entertaier. The thing I hate about this movie is how they casuallu objectify women. I mean when does the industry stop normalizing objectifying women and slapping partners. What’s with those weird fetishes (leg fetish in AVPL and hip fetish in this). People need serious awareness on these aspects.

Coming to the story, which is written by the hero himself, is one of the positive elements. But I felt that Kiran has given himself a lot of importance in writing the screenplay. The amount of unnecessary elevations scenes is not required and it shows the selfishness of the writer.

The actors have given some neat performances. Sai Kumar was very good and the others also did a great job. Special mention the guy who played the hero friend character Bharath. He generated few laughs here and there. As usual the heroine has no importance in the story. She’s just one of those typical lovers of Tollywood (like one of those Rashmika’s characters).

Few other things that were annoying: Unwanted slow motion scenes, slow motion hero entry scenes all over and cringy tik-tok like to and fro cuts. I felt that the hero tried to copy Pawan Kalyan’s style while playing those emotional scenes. Some of the hero scene were total cringe.

Apart from all the cringe, there are some good scenes with his mother and few other scenes which are well crafted. Sai Kumar’s role feels nice even though it’s cliched. The emotional elements were handled decently.

Kiran Abbavaram stole the show with his performance specially in the climax and the last 5 minutes long shot. Neat fun entertainer.