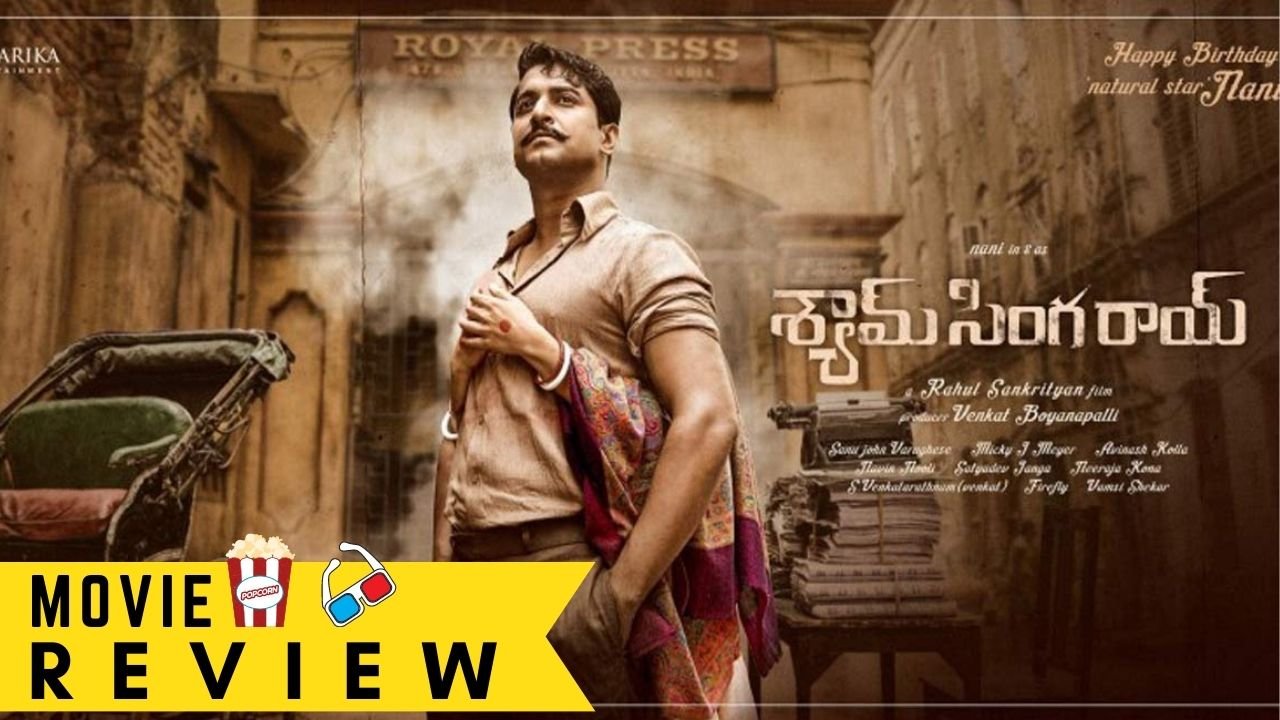 Centers in the theme of reincarnation, unfolding in Kolkata and Hyderabad.

Shyam Singha Roy is Nani’s biggest film of his career and has been promoted a lot in the last few days. The period drama has been released today and let’s see how it is.

Vasu (Nani) is a short-film maker and his only dream is to make it big as a director. He ropes in Keerthi (Krithi Shetty) as the heroine and successfully completes his debut film. During the shoot, he keeps getting blacked out and memories related to his past keep reoccurring to him.

If this was not enough, a Bengali company files a copyright case on him citing he has copied the film’s Story from the famous books in West Bengal.

The story idea is different and credit should go to director Rahul Sankrytan for establishing the reincarnation theme in such an impressive manner as his narration and theme are quite logical.

Also Read: Atrangi Re Review: The Ambition Is Big, But It Doesn’t Translate

Nani was super confident about the film right from day one and his performance proves it all. One can easily say that Shyam Singha Roy is Nani’s career-best performance. He is shown in two different avatars and is superb. Mainly, Nani does full justice to the character of Shyam Singha Roy. Be it is body language, dialogue delivery, or the command he showcases, everything is top-notch.

It has become a routine habit for Sai Pallavi to dish out stellar performances with every film and the same happens with this film as well. She plays the role of a Devadasi in a superb manner and holds the screen in the second half. Madonna Sabastian as the young lawyer does well in her role.

Young actress, Krithi Shetty takes a U-turn from Uppena and is seen as a modern girl and is very good in her role. The chemistry between Sai Pallavi and Nani is amazing as it elevates the romantic angle quite well. Rahul Ravindran gets a key role and he does quite well in the film.

The pace of the film is a bit slow as things take their own time to get established in the second half. Though the Sai Pallavi and Nani romance is good, it gets dragged as director Rahul takes woo too much time to elevate their love story in the first half.

Shyam Singha Roy is an out and out the class film and all those who like popcorn entertainment will be a bit disappointed. The screenplay could have been a bit tighter in the second half.

Shyam Singha Roy is super high on technical aspects. Every frame is top-notch as the color tone of the film is amazing. More than anything, the camerawork is just splendid as it showcases the present and period drama in a stunning manner.

A special mention to the artwork which showcases the Kolkata backdrop in a majestic way. The Navratri festival and the way the dances have been choreographed are amazing. The music by Mickey J Meyer is very good but his background is even better.

The dialogues of the film are amazing and the costume design by Neeraja Kona is also great as every character is designed authentically in the period set up. The way she has styled Sai Pallavi is also very good. Editing is a tad dull in the second half.

Coming to the director Rahul Sankrytan, he deserves special applause as he elevates every character in a wonderful manner. He gets brownie points for not missing the logic in the reincarnation theme and ends the film in a very good way. He has done a lot of homework on the characters, their ideologies, and costumes, and all that is brought out so well through his narration.

On the whole, Shyam Singha Roy is a classy period drama with an impressive storyline. Nani gives his career-best and director Rahul Sankrytan narrates the film in an emotional manner. The film is devoid of masala entertainment and has a slow pace. Barring this, the film has enough drama for the audience to sit back and enjoy this period film. Go for it.