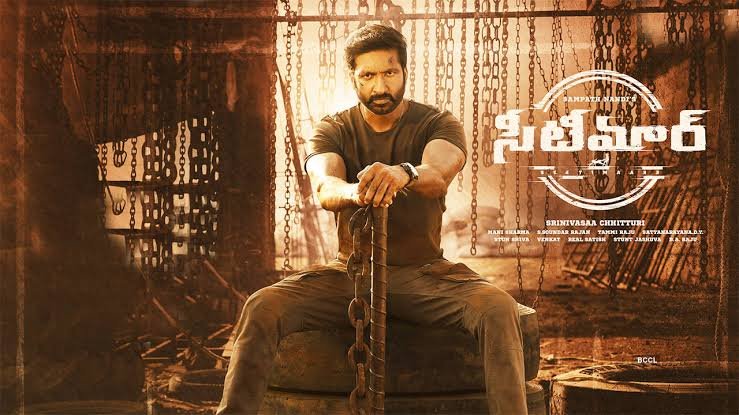 Karthik(Gopichand) is an assistant bank manager who coaches the women’s Kabaddi team in AP. With a lot of difficulties, he takes the team to Delhi for the national Kabaddi championship. There, because of one of his family members, the entire team gets kidnapped. Who is behind this kidnapping? how is Karthik’s family connected to it? and how will Karthik solve the mystery along with Jwala Reddy(Tamannah)? That forms the story.

Seetimaarr is one of the biggest films to release post the second wave of Covid. The film is out on the big screens and let’s see how it is.

Firstly, Seetimaarr is not a Kabaddi film entirely and has a good backdrop and action. Director Sampath Nandi has cleverly mixed the sports drama with mass elements that will be loved by the masses.

Gopichand is very good in his role and shows good emotions. He as a coach emotes with his eyes and is at his usual best when it comes to action. Tamannah is also impressive as the coach of the Telangana Kabaddi team. Her dialogues and body language suit her role well.

Rahman who plays a cop is okay but he could have been used well. Bhumika is good but is getting repetitive in sister roles. The girls who played members of the hockey team are also good. The main villain, Tarun Arora also does well in his key role.

The second half is where the film drops a bit as the drama is dragged for no reason. Gopichand alone tries to handle the kidnapping and his brother-in-law who is a top cop in Delhi is sidelined. This angle looks a bit over the top.

The villain is good but more scenes related to the hero-villain confrontation should have been added. Though the songs are good, they come at a crucial stage and disturb the flow a bit. Also, the makers take a lot of cinematic liberties when it comes to logic and narrate the climax to their convenience.

Production values of the film are top-notch as all the big money spent is showcased on screen. The camerawork is amazing as the Kabaddi matches and action blocks have been showcased quite well. Mani Sharma’s music and BGM are impressive. The editing is decent and so was the entire Kabaddi setup.

Coming to the director Sampath Nandi, he has done an impressive job with the film. His story idea and the way he mixed the sports drama with proper commercial elements looked good.

On the whole, Seetimaarr is a sports drama with a proper action backdrop. The mix of sports and commercial elements is handled quite well. Solid mass moments, neat emotions, and good performances are basic assets. If you ignore some of the logical errors, the masses will love the film as it has been quite some time since we have seen a mass commercial film on the big screen.