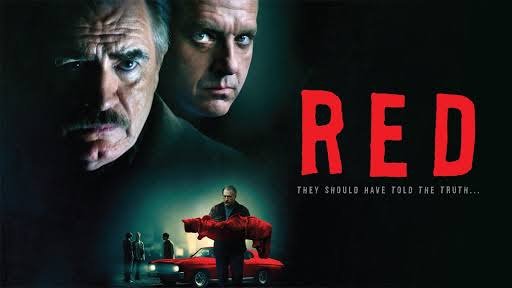 Red is a 2008 American thriller film based on a novel by Jack Ketchum and directed by Trygve Allister Diesen and Lucky McKee.

After reading lots of positive reviews on RED, I kind of knew it was going to be good..And it was.

Brian Cox is ranked among the best character actors in the business. Yet, for all his talent, he’s seldom chosen as a leading man, instead being called upon to fill supporting roles as far ranging as the original Hannibal Lecter (Manhunter) to William Wallace’s dad in Bravehart and William Stryker in X2, the X-Men sequel, among only a few of his 134 roles thus far.

So it comes as a bit of a surprise to see him handed the lead in Red, a mini-masterpiece of one man’s quest for justice.

Directed by Trygve Allister Diesen and Lucky McKee (May, The Woods), and based on a story by Jack Ketchum, Red tells the story of aging war vet Avery Ludlow (Cox), whose only remaining companion after a life of tragedy, a dog named Red, is brutally killed by a group of teens. Built upon a remarkably rich, layered and textured script by Stephen Susco (The Grudge), the story doesn’t play out as your simple paint-by-numbers revenge thriller.

Instead, it unfolds slowly and all too realistically as Ludlow seeks redress, not revenge, from the wealthy father of two of the boys (Tom Sizemore in full sleaze mode), only to be rebuffed by parents and legal channels alike. Even when these attempts fail, Ludlow, ever the civil citizen, tells his story to the local TV news, and launches a lawsuit against the killers.

Drawing parallels between teen dog killer Danny McCormack (Noel Fisher) and Ludlow’s chilling account of how his own son single handedly destroyed his family, we’re presented with a man whose motivation for justice is driven in large part by a belated attempt to right the wrongs of his past. So much so, in fact, that in the absence of his companion dog, the quest for justice virtually becomes Ludlow’s reason for living, to the point where it practically consumes him.

Cox’s performance here is nothing short of breathtaking. He carries this movie on his back and is in every scene, mesmerizing you with his nuanced portrayal of a lonely man to whom tragedy has bequeathed a host of inner demons to torment him in his twilight years.

Don’t mistake Red for lesser fare such as Death Wish or The Brave One. While it is constructed around a fairly simple premise that on the surface appears primed to appeal to the base human desire for revenge, the story here is so much more than that, and to give it short shrift and dismiss it as mere manipulative movie making would be to miss out on a story and performance that is a true must see.

Despite Few Tweaks Here And There, This Was Very Faithful To The Source Novel And Definitely Worth Your Time

Bhediya (2022) Movie Review: The Horror Universe Seems To Be In  Trouble Again. They Desperately Need “Stree” Back!