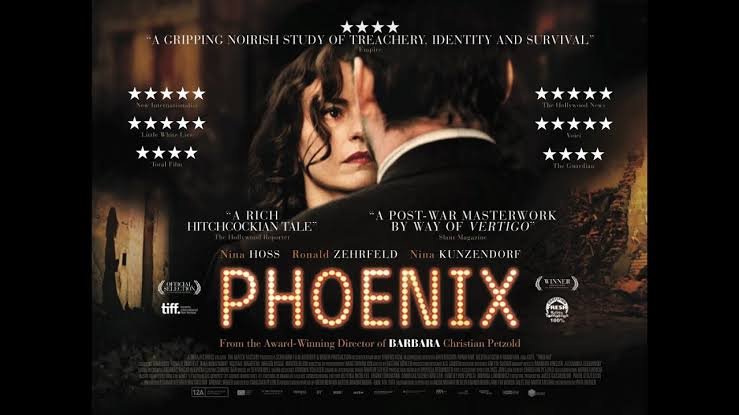 Phoenix is a simple film with complicated themes of identity, survival, and loss. It is not your normal post WWII film, nor is it your typical concentration camp survivor story. The main character, Nelly, was in a camp and her trauma is reflected in the desperation of a divided Berlin. Her interactions with others are clearly influenced by her time in the camps, and Nina Hoss wonderfully portrays the protagonist.

Unfortunately, the actor who plays the lead male, Johnny (Ronald Zehrfeld) is relatively ineffective compared to the stunning Hoss. I am not sure whether is is the script or the acting, but he clearly isn’t up to her level. Nelly’s best friend, Lena, is performed with skill by Nina Kunzendorf. While not as remarkable as Hoss, she holds her own in their scenes together.

The look of the film is lovely, but it is clearly made on a budget. The music is appropriate for the mood and the era, though a couple of times too loud and overly dramatic. The pace is deliberate and effective.

It is a good film that offers us no answers to the questions it poses: how do we survive after everything is taken away, how do we return to a life that no longer exists, whom do we trust now when many of our old friends were Nazi or collaborators during the war, how do we react to someone who returns who we thought was dead, and where do we go when nothing is left of our former life. In the film, like life, there are no easy answers. That only strengthens the film’s appeal.

I don’t want to say to much for fear of giving too much away. The film, while not shocking, is not predicable.

Despite Reservations With Its Choices Of Open Resolution, Phoenix Is A Stellar And Quietly Affecting Film