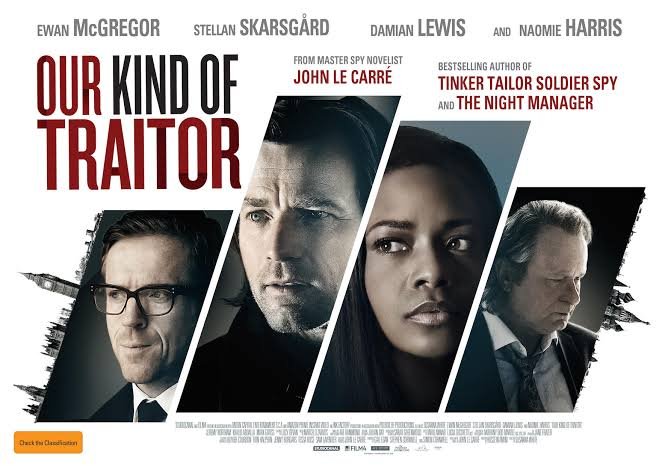 Our Kind of Traitor is a 2016 British spy thriller film directed by Susanna White and written by Hossein Amini.

Perry and his wife go on a holiday to save their marriage and come across Dima, a man who is involved with the mafia. They soon find themselves caught in the middle of a crisis.

The First 10 Minutes of film was Style Over Substance. Every Frame looks gorgeous till end. The real problem lies in the script itself. Because it doesn’t have enough thrill or spy material to hook us. At one point we started feeling boring because of the slow screenplay.

There is no chemistry between the lead and their back story isn’t presented well and also one-sided character arcs except Stellan Skarsgård and Damian Lewis arcs, are good.

There are enough cast who are really a performer and also top stars too. Like Naomie Harris, Ewan McGregor, Damian Lewis, and Stellan Skarsgård.

Naomie Harris and Ewan McGregor as Gail MacKendrick and Perry MacKendrick, who goes for a vacation to save their marriage. Till the end of the film, we don’t know the real problem between them. Once Gail says that “Perry fucked his student”. But it was not that effective. I never cared or interested in them but cared two characters in the film are Damian Lewis as Hector ( MI5 Agent ) and Stellan Skarsgård as Dima ( Mafia – Money Launder).

Dima Needs to save his family before The Prince kills them, how they killed Dimas best friend and his family at the beginning of the film. So, he seeks the help from Perry to deliver a pendrive to MI5. Perry delivers the drive but he doesn’t realize that “Everything has a Consequences “. Hector believes that he can bring down his former boss who was now the middle man to The Prince. But the plan was not moving according to their way. Rest of the film, did Hector saved Dima’s family with the help of Perry and Gail?

The real problem I had with the film was climax. The open conclusion, I know not everytime good guys wins but here already few good men’s died against bad guys. But Hector gets Everything to bring down the bad guys to the Justice by Perry. I waited for their arrest but the film was ended without any voice over or anything. At the end dissatisfied.

Ewan McGregor as Perry MacKendrick, was okay but not even good. In every frame he looks dull and feeling sad. He doesn’t have any scope to show his capabilities.

Naomie Harris as Gail MacKendrick, was okay. She doesn’t have any character depth or place to perform.

Stellan Skarsgård as Dima, was great. He is the only one who has more scene to perform and he did it with ease. I liked the the scene between him and The Prince. Absolutely badass.

Damian Lewis as Hector, was good. I watched this film Because him. After watching TV Show Life, I checked his filmography and found this film. His character in this was as good guy with heart but he can’t achieve or do good thing because of his boss was corrupted. He was the only one does everything for Dima to get his family to safety asylum. He doesn’t have more scenes or character depth but when ever he was in the scene you will see his acting capabilities as an agent. Finally he was too good in suits.

Last but not least, there are few characters who works with Hector are did a good job and their support make scenes gripping.

Stellan Skarsgård and Damian Lewis makes this film a watchable for their outstanding performances. Writer Hossein Amini should have done a gripping screenplay with more character depth which need for a spy thrillers. Susanna White as director done her job well but should have done better. Cinematography by Anthony Dod Mantle was gorgeous.

This is Not Best Spy Film but it has strong performance to make you interested. So, give a chance for The Traitor