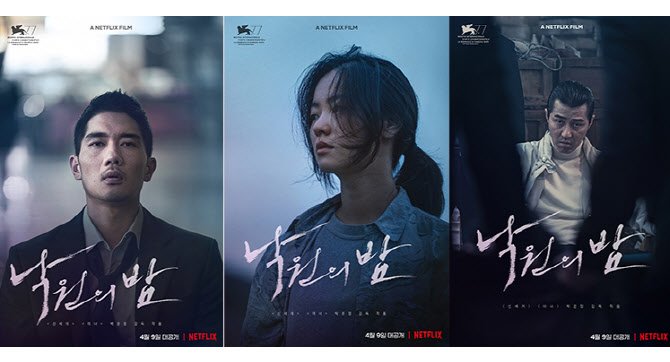 A gangster with nothing to live for and a young woman with just days to live cross paths in Night in Paradise, Park Hoon-jung’s assured, if too familiar, crime drama. Melding two genres ubiquitous in Korean cinema – the gangland revenge thriller and the terminal illness romance – the film offers precious few surprises, but fans of either genre should gain ample sustenance from this tear-stained, blood-splattered odyssey.

Park Hoon-jung is back with another stylish-looking South Korean blood-and-mob fest, Night in Paradise (Nak-Won-Eui-Barm). The writer-director emerged on the Korean scene after authoring the screenplay of Park Chan-wook’s vendetta hit I Saw the Devil. Among the films he’s directed, the most relevant is the gangland crime drama New World, which was released in the U.S. in 2013. The new movie has its moments, but also has dull stretches that many viewers are likely to fast-forward through to get to the next shooting and knifing scene. Although it garnered a slot in Venice’s out of competition line-up, the real target of this familiar-looking action movie is certainly not festival but genre fans.

With signature stylishness, the film opens on a glamorous glimpse of protag Tae-gu (Eom Tae-goo) in yellow light, a shot that might have been inspired by Wong Kar-wai. He is gazing at some prisoners on the floor who have been stripped and bound like animals, while a dangerous soundtrack signals a meaningful reaction to come.

Tae-goo is the top dog for the white-haired gang boss Mr. Yang, who is somewhere between a cowardly rabbit and a mad dog craving blood. But before anything can happen, the scene shifts to the airport and more glam shots of Tae-goo with his own men in black flanking him protectively. He’s there to meet his sick sister and his little niece, who is quite a handful. When he gives her a beautifully wrapped present in the back seat of the limo that she and Mom are about to take, and the camera continues to linger on it long after its moment is over, everyone knows it’s going to blow up and kill everyone in the car. Inserts of confused editing only delay the action.

Though his face spartanly expresses no emotion, Tae-gu is devastated. He concludes that rival boss Doh, who has been trying to lure him away from Yang for some time, is behind the murders and arranges to meet him in a hotel sauna. There we discover Tae-gu is the boy with the dragon tattoo — an impressively large one curling all over his back, as glimpsed in a chastely shot nude scene in a swimming pool, where he goes to cool off after sharing a sweat with boss Doh. He returns to the cabin with a long, sharp knife and demonstrates why he’s on the up-and-coming killer list. To make his getaway, he gracefully squirms naked through a little window and calmly drives off in his expensive car.

Admittedly, this is a promising pre-title sequence. Night in Paradise contains a lot of good plotting, several amusing characters and a decent array of exciting action scenes and bloodshed. But it is indulgently long, even within scenes, like the needlessly protracted opening explosion that sets the story in motion.

Yang is very pleased with the way Tae-gu has bumped off the competition, which immediately makes one wonder if the youth has been barking up the wrong tree about who killed his sister and niece. But there’s a long way to go before we find out. Yang gives him money and a ticket to Jeju island, with instructions to wait there until they can flee to Vladivostok together.

Without his posse and his fancy suits, Tae-gu seems like a different person — a less interesting one. He hides out in the remote farmhouse of Yang’s pal, the pop-eyed oldster Kuto, who turns out to be an arms dealer specialized in hiding guns inside fish and selling them to mobsters. There he meets Kuto’s niece, a tough, surly, insulting and attractive young woman named Jae-yeon (Jeon Yeo-been).

She impresses Tae-gu with her sharpshooting prowess, which is bound to come in handy before the story is over. She pretends not to know he’s a gangster and not to be interested in him. Sadly, she’s suffering from a fatal illness (little sign of it, though) and their teasing banter usually ends with her refrain, “but soon I’ll be dead.”

Meanwhile, back in Seoul, Yang has foolishly unleashed a major gang war, which he loses. In a nicely staged meeting around a large table, where a boss called Captain Park mediates a truce, Yang eats humble pie in front of Chief Ma (Cha Seung-won), who will be everyone’s favorite gang lord for some time to come.

Wearing his hair slicked back in a greasy 80s style and exuding Italianate charm, the youthful Ma threatens Yang with horrible disfigurement for trying to kill his boss, Doh, who didn’t die after all and is in the hospital recovering from his knife wounds. Yang is terrified. To save his skin, he cravenly puts all the blame on his star Tae-gu and offers to set him up to be murdered.

The last half of the film takes place on the island, where two strong set pieces explosively unfold in Kuto’s farmhouse and a memorable chase through the airport leads into a noteworthy car chase by a cortege of black limos. A great deal of blood is shed and the finale may come as a bit of a surprise, being more like a festival ending than a genre one.