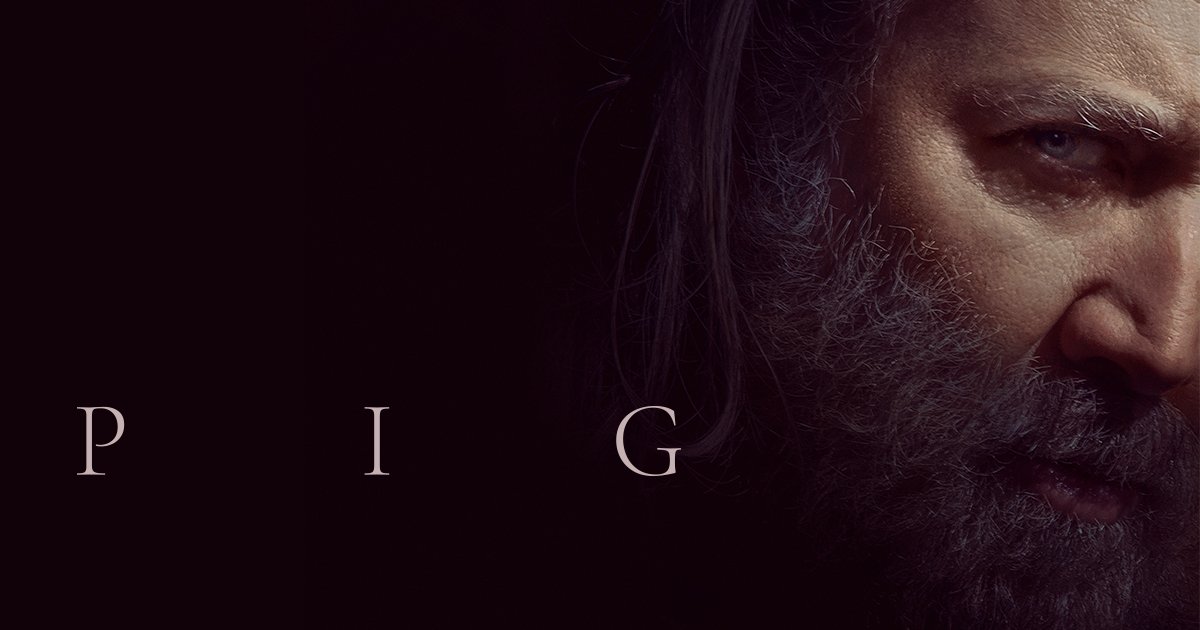 Pig is a 2021 American thriller drama film co-written and directed by Michael Sarnoski in his directorial debut. It stars Nicolas Cage, Alex Wolff and Adam Arkin.

Pig opens in a forest, and a hermit looking man named Rob (Cage) is truffle hunting with his swine-companion merely named Pig. It feels old-world. It’s beautifully shot. Then all of a sudden a bright yellow Camaro comes blaring up the path to Rob’s hut. Wow, this takes place in 2021? It was surprising. Inside the Camaro is Amir (played by Alex Wolff of Hereditary fame). He buys the treasured truffles from Rob and sells them to high-end restaurateurs in Portland. One night thieves break into the hut, assault Rob and steal Pig. Rather than getting the blood-soaked rampage audiences could easily assume they’re in store for, we get a quiet, slow burning story that painfully unfolds through Portland’s underground foodie scene.

Nic Cage gives a measured, contemplative performance fueled by grief and anger but rarely letting himself emote or explode. When he speaks it’s thoughtful and heavy. This is a wonderful project for Cage, and I love seeing actors do great work. Especially aging actors. Cage still has plenty of mileage left as he doles out the performances that pay the bills but also undertakes the roles that are challenging from talented filmmakers who realize he isn’t a dancing, screaming monkey. We slowly learn small snippets of information about Rob. He’s been living in his hut in the woods for over a decade, but at one point he was a chef of legendary renown. Simply saying his name turned heads and raised brows from chefs and customers alike. One day he disappears. We never really learn why, but it likely has to do with the death of his wife and the jaded cynicism with modern cuisine.

There is a good scene in which Rob explains to a higher end, five star chef that the pretentious food he is serving isn’t real, the “foodie” customers aren’t real, none of this modern malarkey means anything. It’s bloated, it’s fake, it’s tasteless. This devastates the chef but there is a certain truth to what Rob says. Cage’s delivery here is intense and dark but almost said with a note of self defeat. It’s good stuff.

Rob partners with Amir to find out where Pig is and how to get her back. Alex Wolff gives a strong performance. To act alongside Cage and not just be overshadowed requires good writing and great performing. The team they form is funny and at times tumultuous yet most importantly they’re believable. It also helps Wolff has a great emotional range on the canvas of his face. There are close up shots of him processing what’s going on and he says so much without ushering a word (reminiscent of Hereditary). It’s powerful stuff. Amir is trying desperately to make a name for himself in the industry without using the credentials of his celebrity chef father who he has been overshadowed by his entire life. After the loss of his mother, he and his father have little reason to communicate.

The reason this film is successful is because the duo is so good. Pig could’ve easily followed Rob the entire time but the fact that it doesn’t gets us invested in both men and their plights for resolve by the end of the film.

Pig takes the difficult approach to dealing with grief and loss, it demonstrates the power of difficult conversation compared to the standard issue shoot out. I respect that. I appreciate it used violence as a catalyst to the plot but never to solve itself. That is realistic. Much like real life, the characters we meet continue living without drastic change. It’s an interesting film made with a lot of love and care. I was feeling a little melancholic at the end of the film. I felt robbed of the emotional payoff I was setting up in my mind. I didn’t get that, and I respect Pig for that. I am curious to see what first time filmmaker Michael Sarnoski has in store for us next.