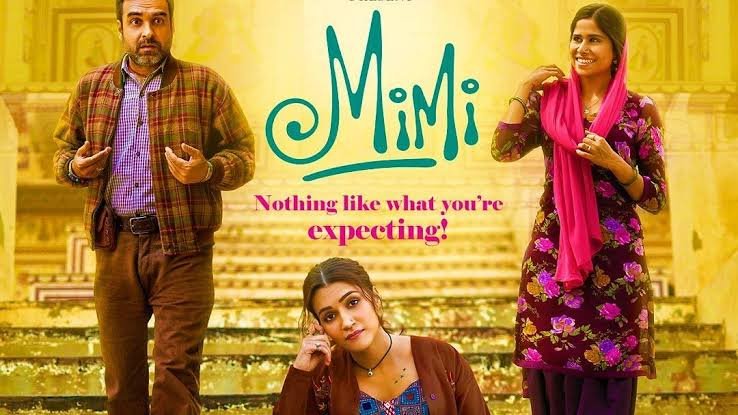 Mimi is a 2021 Indian Hindi-language comedy-drama film directed by Laxman Utekar. The film’s story and screenplay, originally based on Marathi 2011 film Mala Aai Vhhaychy!, was adapted by Utekar alongside Rohan Shankar.

“Mimi’ is a well written, well made film which carries a heart.

Story revolves around the surrogate mother whose biological parents abandon the surrogacy and the struggle she goes through.

Kriti Sanon may have a ton of films under her wings that shows off her glamour but this definitely proves she’s more than just the pretty face. Perhaps the first time she’s going to be loved as an actress, instead of a model.

Pankaj Tripathi , as usual is at his best as a character that drives the story initially and later adds humour and fun when the plot gets tense.

Evelyn and Aiden, instead of being a usual ‘english couple in Indian film’ did invest emotionally as the chatacters who wants a kid. Evelyn did an amazing job especially in the latter half of the film.

Manoj ,Supriya and Sai were impressive even as side characters.

A. R. Rahman’s music score was good but the background score was flawless, both of which flows beautifully throughout the film, adding an extra cherry on top.

Overall it is a beautiful film that deserves a watch.

Emotional Rollercoaster With Comedy On Track