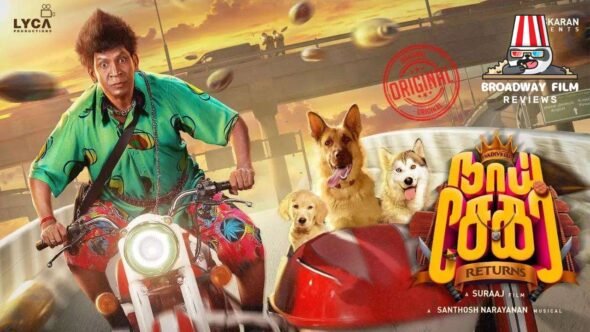 Petty criminal Naai Sekar kidnaps dogs belonging to the rich in order to collect a ransom but makes a critical mistake when he abducts the dog of a ruthless gangster. The gangster vows to find his beloved dog and the people responsible. Naai Sekar and his accomplices try to escape the gangster’s wrath, as getting caught by him mean paying the ultimate price.

Though Vadivelu hasn’t been in action for quite a few years, his comic one-liners stand the test of time and are an essential part of youngsters’ vocabulary in Tamil Nadu.

That is why when Naai Sekar, his character in this comeback film, utters a few of his popular dialogues, the Vadivelu fan within us wants us to celebrate. But then, everything ends there.

Suraj, the director of Naai Sekar Returns, makes no effort to pen an interesting screenplay and merely relies on his star’s yesteryear jokes and antics. There are some really fun moments in the second half, but they don’t help the film much.

Trouble begins when Naai Sekar kidnaps Dass’s favorite pet dog, giving us a  lead to a face-off scene. This paves the way for him to learn about his family’s past and how their lucky dog was taken away, leading to the family’s fall from grace.

The second half of the movie deals with Naai Sekar’s antics to rescue his family dog from a now-influential kingpin, Max, in Hyderabad.  Can Naai Sekar pull this mission off successfully?

Vadivelu’s Naai Sekar Returns has a plot that’s new in many ways. Having a protagonist who is a dog kidnapper is sufficient enough to pull off a decent entertainer. However, Suraaj fails miserably to infuse interesting elements and subplots to hold our interest and doesn’t even evoke laughter (the reason why we have even chosen to watch the film).

Vadivelu is always a delight to watch on the big screen, but even he can do only so much when faced with such weak writing. Anand  Raj’s one-liners work and that’s the only savior of the film. His combination scenes with Vadivelu are fun and something to watch out for.

Shivani Narayanan plays Max’s sister and has done justice to the role and delivered what’s expected out of her character. But if the writing had been better, it would have added some sense to the script.

Sivaangi appears only for a short duration of time and there’s no room for her to perform. Redin Kingsley could concentrate on his comic timing instead of just repeating his antics of merely being loud.

Santhosh Narayanan’s quirky songs and background score help elevate a few sequences, but otherwise, the technical aspects of the film are strictly average.

Naai Sekar Returns might not be the best return for Vadivelu, but for at least now, let’s be happy that he is back, and hope better roles bring out the fantastic performer in him.

Some Comedies Worked well and So Many Comedies Didn’t Work. This Weak Plot Even Vadivelu Can’t Save this Movie. Overall This is Not Comeback It’s a Throwback.

Mad Dog K-Drama Review: “Might not be everybody’s cup of tea but If You’re a K-Drama Lovers, Then this is for You”