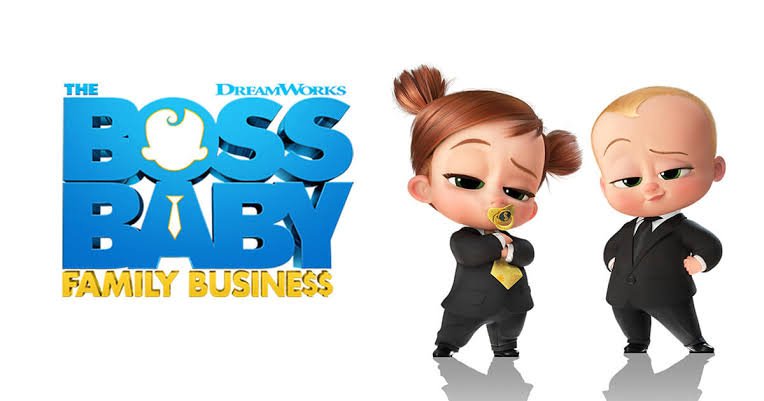 Usually my reviews are quite long in detail, but this it’ll be short since there isn’t much to say about it, so…, this is a sequel that didn’t need to exist, even though I like the first Boss Baby fine, Tobey McGuire got replaced by James Marsden and erm.., yeah, the trailers didn’t grab me at all and my expectations were low, so I watched it yesterday and erm.., it was actually not terrible, not good but pretty split in the middle.

I like the animation overall, it’s nice and simple and colourful with nice use of Cartoon slapstick, it’s pretty good, it has a few funny lines and moments sprinkled across, I like Tina she was a pretty fun and expressive character, Tabitha was cute and relatable I suppose, the voice acting was… fine, but the cast did do the most of what they can with Alec Baldwin and Amy Sadaris being the big standouts!, I liked the ending and the film’s nice heart and tone, it’s quite nice and gives you a nice warm feel and finally the chases and fights are quite amusing and fun to watch, along with a really lovely song “Together We Stand” and a decent score by Hans Zimmer & Steve Mazzaro.

However, there are things that hold this back, like a very recycled and predictable plot, the villain here isn’t as good as the first movie’s villain, Tim and Ted are kinda annoying and not that interesting, same can be said with everyone else who are very one dimensional with one trope/goal, not to mention about 80% of the humour isn’t funny and just drags on, so kinda basic DreamWorks humour and even the animation gets rather too much with how bland their characters look (despite how well designed they are).

So yeah, it’s not good, or bad, it’s kinda passable, Boss Baby 2: Family Business is just a step down from the first movie, not awful, but.., nothing wowing or leaps off the screen to amaze you, y’know?, it does have a good message and heart to it, along with nice animation and few funny gags, however it’s insanely predictable and all over the way and expect for Tina and maybe Tabitha, every other character is just forgettable with mostly tiresome humour and sometimes phones in acting, (especially Jeff Goldblum), so it’s a totally fine kids film,.

I know people will trash the heck of this film for sure, but it’s really not bad, there are FAR worse animated films out there believe me I know, so if you like the first film, you’ll like this probably or if you are vice verse then you’ll LOATHE this movie, kids will enjoy and parents will get something out of it, but other then that, it’s just a mediocrely average film for DreamWorks, but hey, looks better then the next film I’ll be seeing from THEM!.

Not Good Enough But Kids Loves It