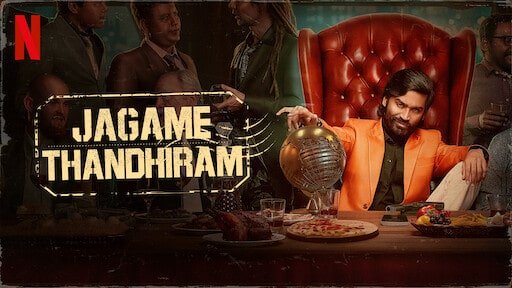 Only a few directors in Kollywood crafted their carrier successfully. Even their names enough to pull the audience to the theater. One of them, Karthik Subbaraj. He is known for his new storyline with a good social message and mainly for all the set of audience. Did he repeat his magic again? Let’s Check out.

Average, Not a Karthik Subbaraj Film!

When a clever, carefree gangster is recruited to help an overseas crime lord take down a rival, he is caught off guard by the moral dilemmas that follow.

From the opening frame, Karthik Subbaraj failed to engage the audience in this boring and predictable gangster drama. Sometimes I felt Style over substance because there is no real tension or conflict to engage the audience. Every action sequence lacks intelligence or logic. In this 2:38 hour film, we never care about anyone. Everyone was like a passing cloud. Though the cast has some of the foreign actors..it has barely made any impact because of the poor characterization. The dialogue ( English & Srilankan Tamil) is horrible, without subtitles you can’t hear a single word. We feel as if we are watching a video game where someone keeps on shooting whoever comes in his way. A Madurai gangster just like that travels to London and kills so many people. No police – no inquiry – no CCTvs in London streets. Totally illogical. A big villain not knowing even small information about the other gang.

Dhanush was the only savior of the movie because of his brilliant acting. I was waiting for this movie after watching the actor’s previous masterpieces like ‘Asuran’ and ‘Karnan’ but was highly disappointed. Another notable character and comedic relief were Sharath Ravi. His timing comedy with Dhanush is laughable. The romance between Dhanush and Aishwarya Lekshmi lacks chemistry and also unwanted.

Even the director’s previous “Petta” was better than this. Everyone can expect this as an entertaining gangster movie after watching the trailer but the poor writing, laggy screenplay, average dialogues make this a “not worthy” watch. Some scenes were not at all necessary making it a lengthy movie. The movie has no universal subject to release in so many languages. This Netflix’s highly anticipated movie is not worth your time if you are expecting some thrills and entertainment. But u can watch if you want to pass the time in this lockdown.