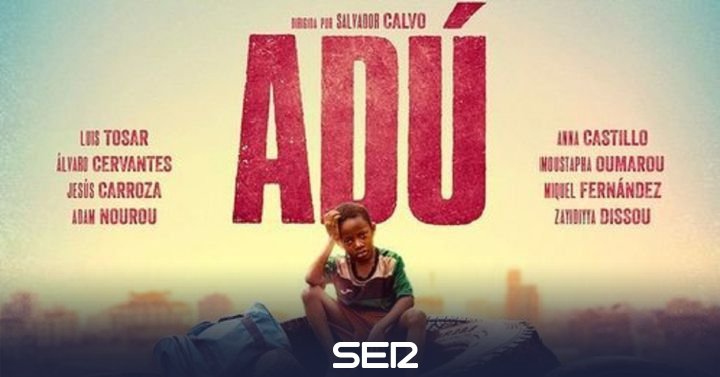 Adú is a 2020 Spanish drama film directed by Salvador Calvo, written by Alejandro Hernández and starring Moustapha Oumarou, Luis Tosar and Álvaro Cervantes. The film premiered in Spain on 31 January 2020.

There are so many good parts to this movie that it’s so disappointing that it doesn’t quite hang together.

A film made up of three distinct strands which connect thematically, but which do so in such a narratively tangential way it left me unsatisfied.

The film makers know where the meat of their story is – after all they named the movie after him – little Adú and his sister set out to make their way across Africa to reach their father in Spain.

This is absolutely the heart of the film, and I would have gladly sacrificed the other two strands for more of Adú and his companions trek across countries. Having said that, it began to strain credulity that Adú and his companion were undergoing such hardship and ordeals and yet he could maintain such a happy, sunny disposition. Moustapha Oumarou is charming and beguiling in the role, and I understand the desire to keep his innocence intact to preserve sympathy but after all he goes through, for him not to have changed by the end is short-changing reality.

The second strand starts out super strong. A rich European works with locals to patrol a national park to prevent elephant poaching. He loves the animals but his lack of empathy with people makes him deeply unpopular with the Senegalese rangers, and, we learn, with his daughter who is visiting him. It has a lot to explore; the potentially misguided efforts of well-meaning Europeans intervening in Africa meeting the realities of the local culture and economy, but barely has it started before the focus switches to the man’s relationship with his wild daughter. And that’s fine, I guess, but it jettisons all the potential of the locale in favour of a fairly generic father/daughter communication gap. Gradually the focus shifts entirely to the daughter until the whole story reveals itself to have been a set-up for an episode focusing on the border (and the comparative ease with which white people can cross it). Anti-climactic and wasteful.

The final strand is the weakest of the lot. Like the second strand, it starts out strong with a bravura set piece at the Moroccan/Spanish border at Melilla, but this soon descends into repetitive scenes of a border guard struggling to reconcile his loyalty to his colleagues with telling the truth of what happened.

Much of the film has the look of authentic locales. There are some undeniably shocking, heart breaking moments along the way, and by the films end, we have gotten a little more insight into the complex interplay of forces causing a border crisis between Europe and Africa. That is a worthy enterprise, but narratively the film just doesn’t entirely satisfy.

It is a fascinating look at a part of the world about which I rarely see movies so I am pleased to have watched it, but more development at the script stage about the second and third strands would have yielded much greater rewards, and ultimately perhaps widened the films impact.

For how much this covers in the span of the runtime, i recommend it.