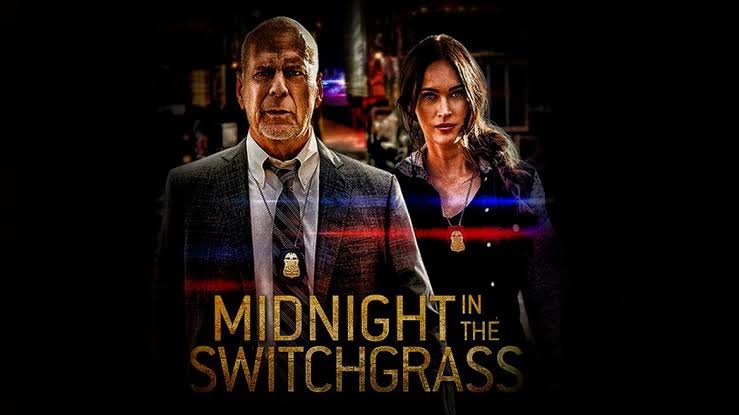 Midnight in the Switchgrass is an American crime thriller film directed by Randall Emmett in his directorial debut, from a screenplay by Alan Horsnail. It stars Megan Fox, Bruce Willis, Emile Hirsch, Lukas Haas, Colson Baker and Lydia Hull.

After watching the trailer of the film, I don’t have even 1% of interest to watch this film because everything is in the trailer itself. Still, I watched because Megan Fox. Her last film Till Death was amazing and the trailer also not impressive. So I watched it, and did I like it?

No, I didn’t like it. Actually the opening scene and the dialogue was good. The first five minutes of the film was too good and they hooked up from the beginning. And then the movie start falling apart. The film have two plot and intersect at one point. Emile Hirsch as Byron Crawford, investigating serial murders. And other side, Megan Fox as Rebecca Lombardi and Bruce Willis as Karl Helter, are FBI agent very close to busting a sex-trafficking ring.

I think this is this worst film in Megan Fox career. I liked Megan Fox acting in Till Death film and the film also too good. But here everything was terrible. Actually I don’t think she fit for a FBI agent. In few scene she looks like a school teenager.

Bruce Willis – what to say man?. How many good films he made in past, now he making bad films in present. I don’t know what is his last best film. I mean I can’t remember. In this film, he has only four or five scene. And also not impressive. His characterization is weak and no arc at all. Completely forgettable.

Emile Hirsch as Byron Crawford is the only character in film make sense, emotions, well written character ( still need to improve) , motive, and Arc. This is not his performance because we all know him in Into The Wild and Lone Survivor.

Other technical department – just leave it. There is no sense at all, only time waste.

Even if you have plenty of time, still this movie doesn’t deserve it. Watch a better movie or rewatch Till Death again and again.