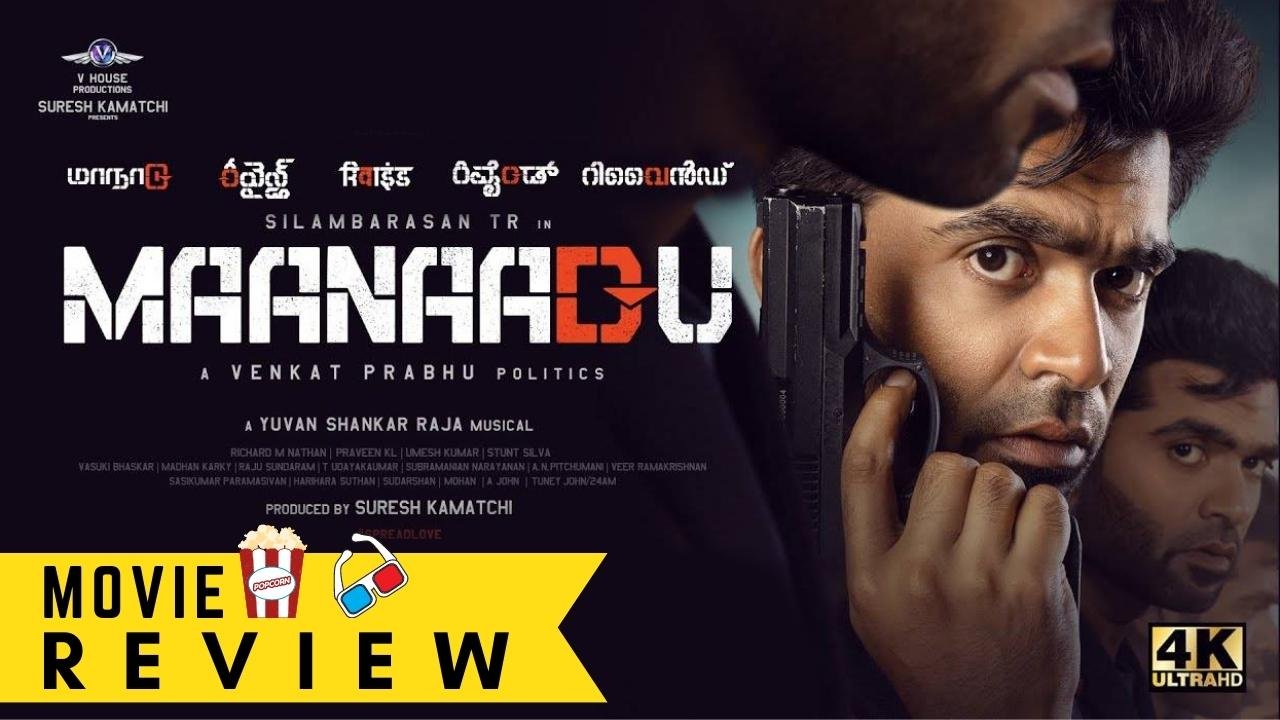 It revolves around a common man and a police officer, who is trapped in a time loop, at the day of a public conference of the chief minister and forced to live the same day over and over again.

It’s been years since Simbu gave a Hit. You can’t remember which is his last hit movie in his filmography. Even Eswaran failed to make an impact on a simple storyline. But fans eagerly waiting for their hero’s Strong comeback. First, the movie team planned to release on Diwali but later it was postponed to Nov 25th.

After a strong booking all over Tamil Nadu, suddenly the producer of the film announced the film was postponed. This is the first time happening to Simbu’s film, Vaalu (2015) faced many issues.

Finally, Maanaadu was released in theaters without any special shows. Did Venkat Prabhu do his magic again? Did Simbu Give his strong comeback? Let’s Dive Into The Review…

Maanaadu is a feast of sound, vision, even taste. It is noteworthy that Venkat Prabhu tells a complex sci-fi story, but it is completely plausible with a good first half of being confronted with a film whose plot one can predict after a while, only to be confronted a little later with twists and turns that were simply KICKASS.

You could say that halfway through as it makes you anticipate for an interval bang and the film does a U-turn which pays off.

Venkat Prabhu shows the power dynamics and how corrupt people incite violence in the name of religion and the depths of the human mind where terrifying creatures can hide. But what makes the film so interesting: The irony with which he proceeded here with his writing for SJ Suryah (Dhanuskodi) whose over the top antics is fun to watch supported by Simbu’s (Abdul Khaaliq) excellent performance and it is commendable to see him experiment shedding his mass hero image.

The conflict fits in harmoniously and with disastrous consequences in the event and challenging their own fate. They both hold the plot together and it is the beginning and the end and it repeats (maybe Part 2).

The editing deserves a special mention here, so expect a breakneck pace and whiplash sequences that keep the 2nd half in a tense zone, It is supported with a terrific soundtrack by Yuvan Shankar Raja (whoever saw the film will understand that).

It has a unique vision, and VP stages scenes in an interesting way to express the tug-of-war and I’m sure it will cater to all types of audiences.

This film contains all the things that an audience would expect to make it a purely entertaining and HOOT-worthy watch.