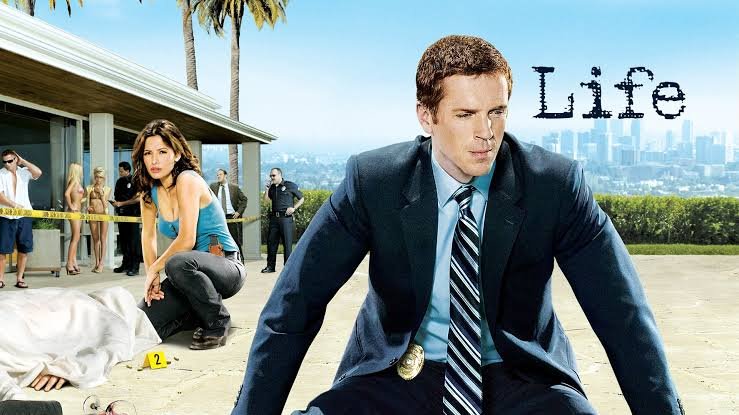 Life is an American crime drama television series created by Rand Ravich that aired for two seasons on NBC. It was produced by Universal Media Studios under the supervision of executive producers Rand Ravich, Far Shariat, David Semel, and Daniel Sackheim. Semel also directed the pilot.

The set up is this; Charlie Crews was a cop on the beat who went to maximum security prison on a life sentence for twelve years. After twelve years he was proved innocent and, when he gets out he goes back to the force. Things have changed for Charlie though; he’s divorced, his mother is dead, his dad is remarrying, and he’s loaded. His settlement for the false imprisonment has made him rich, famous and a detective. Everyone thinks he’s just in the position because of the settlement, but the truth is, he’s actually pretty good, which we find out in the first five minutes.

Crews is even more interesting because he’s spent the last twelve years in prison reading “The Path to Zen” and instead of raising his voice when he’s angry, like normal people, he spouts off about how the universe is making fun of us. And Crews, unlike House, has a bona fide soft side. (Spoiler) After he fatally wounds a crack head, he tells him, “It’s okay, it was just a bad dream. Go back to sleep,” as the man dies in his arms, which was a slow and truly touching moment that was actually, you know, sweet for a network television pilot. Damian Lewis plays Crews with such subtlety and sincerity, that the character is completely believable.

Also, unlike “House”, Life has a whole cast of complicated and interesting characters. Sarah Shahi’s Dani Reese is Crews’ partner and a recovered drug addict. She’s under pressure from the department both to prove that she’s fit for duty and to find a way to get rid of Crews. It’s a difficult line to walk for her because, like I said, Crews is good at his job, and Reese respects that.

Reese is also smart. She doesn’t believe Crews is Zen enough to have completely let go of his own case, which, as we discover at the very end of the show (Spoiler) he has not. He’s devoted a whole room in his ridiculously large house to laying out the case. We see that his old partner and current boss, the person putting pressure on Reese, were involved in setting Crews up, if not the original murder all together. Crews’ case is going to be an ongoing plot line, probably throughout the entire series, and it’s something I’m looking forward to seeing fleshed out.

My favorite supporting character thus far has got to be Adam Arkin’s Ted Early, who was in prison with Crews for insider trading. Now that they’re both out and Crews is loaded, Early is his financial adviser and lives above Crews’ garage.

The show also makes fun references to how much technology has changed in such a short time span. Crews, having been in prison for twelve years, has no clue that there are such things as camera phones and instant messages. It’s interesting to have a character who is very smart, but a little hapless in the modern era.

I’m very interested in both the ongoing story of the series and in the interactions Reese and Crews will have in the future with each other and with the rest of the force. It’s a great show, so tune in and watch it.

What A Shame. Really great spin on a cop series. I’m actually mad this only has two seasons.