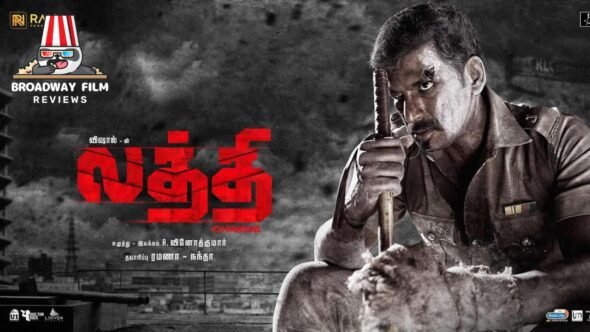 A police constable gets trapped in a building with his 10-year-old kid, and how they escape from the building surrounded by a group of the enemy.

Vishal is known for his high-octane mass-action entertainer movie. But the last few films are not up to his mark – Especially Action,  Chakra, Enemy, and Veeramae Vaagai Soodum are okayish movies from Vishal.

Muruganantham (Vishal) is a middle-aged, middle-class constable under suspension, who is desperately trying to get back into his job  – not only because he loves it but also because he has a family to run.

He is an honest and upright cop but also fears authority. He clears his superior’s tea glass and cleans leftovers from his table.

Upon rejoining, he begs his superior officer not to put him on ‘enquiry duty’ – basically beating the living daylights out of the custodial suspects with a Laththi – which got him suspended (“I am even ready to do your domestic chores,” he tells his amused superior).

In other words, the hero, especially for a Tamil cop film, doesn’t seem larger than life. And, this works not only character-wise but also plot-wise.

Because, when the antagonists surround him and his school-going son in a half-constructed building towards the end of the first half, it sets up the film beautifully.

The audience will root for  Muruganantham not just because he is the hero; he is also the underdog here. He has to overcome the overwhelming odds to save himself and his little son.

But all these good bits get undone post-intermission. Just as we prepare ourselves for the cat-and-mouse game to veer into the survival drama zone, the film takes a u-turn and becomes yet another Tamil-action film with the usual slo-mo fights and out-of-place melodrama.

As much as the protagonist’s character is fleshed out well, the writing is underwhelming with respect to the antagonists. The villains are just brawny, baritone-voiced men doing bad things.

They are a father-son duo trying to harm another father-son duo – apart from this, there is nothing noteworthy. Just to make the audience hate one of the bad guys, the writer and/or the director resort to a vulgarly shot brutal rape scene.

The writing misses the point: more than loathing the villains, we are supposed to be scared of them. But they hardly appear terrifying.

The final act of the film seems stretched out just for Vishal to showcase his acting and action chops. It becomes a bit too long. Though it’s Vishal who single-handedly takes down over a hundred thugs, we are the ones who get tired of it.

Mad Dog K-Drama Review: “Might not be everybody’s cup of tea but If You’re a K-Drama Lovers, Then this is for You”