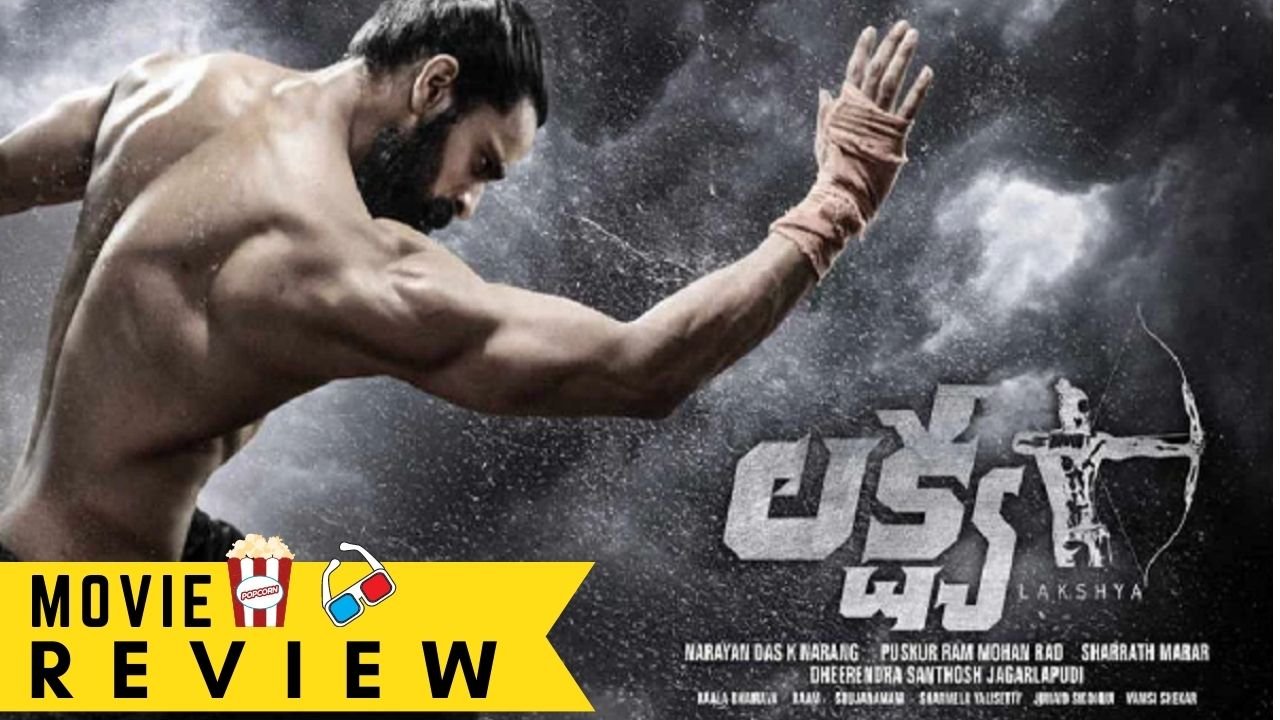 Pardhu(naga shourya) is a gifted archer right from his childhood. Seeing his talent, pardhu’s Grandfather sachin khedekar) sacrifices his earnings and joins him in hyderabad’s best archery Academy. Very soon, pardhu becomes the state champion making his grandfather proud. The twist in the Tale arises when pradhu’s grandfather passes away suddenly. With this shock, pardhu gets addicted to Drugs. The rest of the story is about how pardhu fights back in life and wins the world championship.

Lakshya is a film that has Naga Shourya in the role of an archer. The sports drama has been released today and let’s see how it is. Naga Shourya is the biggest asset of this film and does a sincere job. Be it his physical transformation or emotional performance, Shourya has done well throughout the film. Sachin Khedekar in the role of Shourya’s grandfather was neat. Ketika Sharma gets a crucial role after Romantic and does an impressive job as Shourya’s sincere girlfriend. The manner in which Naga Shourya gets addicted to drugs and spoils his career has been shown well. Kireeti in a negative role is good and emotes well. The first half has a decent pace and the conflict point is also induced well at the breakpoint. Shatru, who plays the main villain was classy in his role.

Firstly, the game of archery is quite new for the audience. So, a good explanation about how it works should have been introduced in the beginning only. In the second half, the archery set up and world championship look quite silly and are poorly designed. The emotions between Naga Shourya and his grandfather should have been elevated to create more impact in the second half. Post the decent first half, the second half goes for a toss with dull narration and forced emotions. Jagapathi Babu’s role lacks depth and is silly. The way the noted actor plays it is also over the top. The motive for Shourya to make a comeback should have been narrated in a more gripping manner. Also, the climax is dull and is wrapped up without any emotional impact.

Production values of the film are decent but the sports backdrop and the way the championship is held in the climax is below par. Music by Kaala Bhairava is pretty ordinary but his BGM was decent. Editing is okay but scenes related to Jagapathi Babu and Shourya should have been trimmed in the second half. Coming to the director Santosh, he has done just an okay job with the film. He sets up the story, emotions well in the first half. But as he has hardly any story left in the second half, he brings in boring tracks which lack emotional connection. If he would have dramatized the struggle of Shourya a bit more, the film would have been something else.

On the whole, Lakshya is an archery-based sports drama with a standout performance by Naga Shourya. The first half is good but things fall flat in the second half with forced emotions and a dull climax. All those who like sports dramas can give this film a shot but there is nothing new that this film showcases.