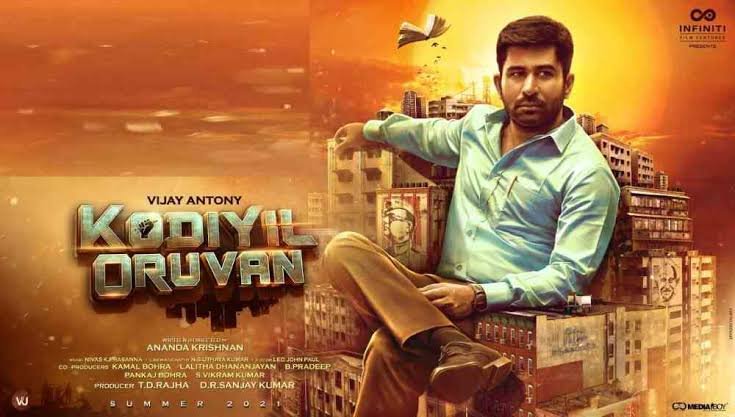 Vijaya Raghavan’s (Vijay Anthony) only dream is to crack the IAS. He lives in a small colony, teaches the kids, and also prepares for his IAS exams. But sadly, he gets into a feud with the bad guys who stop him from taking the IAS exams. The rest of the story is about how Vijaya Raghavan teaches everyone a lesson and becomes a corporator in the same colony.

The film is set amidst a slum in the city. How people live in such areas, what are the politics created, and how the poor people are deprived of their rights, such scenes have been showcased well. The mother sentiment in the film is also impressive.

With each film, Vijay Anthony is impressing everyone and he does the same as the socially responsible person. Kodiyil Oruvan’s journey to the top and the emotions that the character faces are handled ably. The social message showcased in the film is also good.

Apart from the main emotion of the mother, the rest of the emotions are not given much focus. The manner in which the other aspects are taken lightly creates a dull effect on the film. In a way, there are several key scenes that have been wrapped up in a forced manner.

In the second half, the flow of the film is not at all proper. The scenes are rushed and everything happens conveniently. The length of the film is also long and bores the audience. The film needs crisp editing to make things better.

The camerawork of the film is quite impressive as the slums and the populated backdrop of the city are showcased well.

Songs are also quite good. The editing is bad but the production design was good.

Coming to the director Anand Krishnan, his story is good but his screenplay is disappointing in the second part which has too much lag.

On the whole, Kodiyil Oruvan is a social drama that has some impressive performances. The mother sentiment is good and the social message is elevated well in the first half. But all this falls flat in the second half which is filled with lag and lengthy scenes making this film strictly an okay watch.

Anandha Krishnan Failed To Recreate the Magic He Did In “Metro”