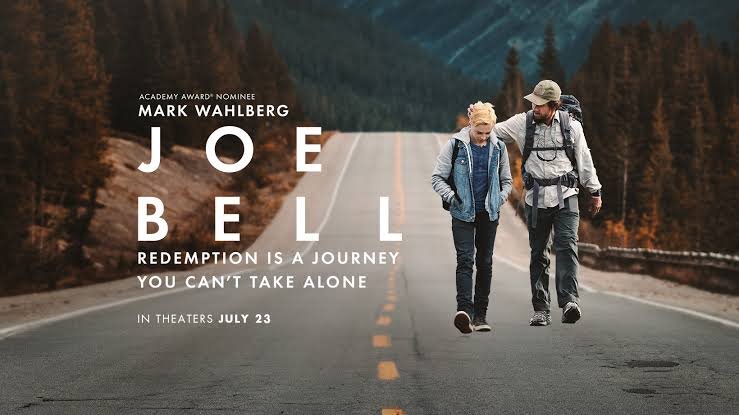 Story: The story of an Oregonian father who pays tribute to his gay teenage son, Jadin, embarking on a self-reflective walk across America to speak to heartland citizens about the real and terrifying costs of bullying.

Greetings again from the darkness. Given his track record, Mark Wahlberg is not the guy that first comes to mind for a message movie about tolerance and inclusion. On the other hand, he’s perfectly cast as a macho Oregon dad struggling with his own prejudices when his son comes out as gay.

Wahlberg plays Joe Bell, and the film is based on the true story of Bell’s decision to walk across America – from Oregon to New York City in honor of his son Jadin (played well by Reid Miller). Oregon was home, but the Big Apple was where Jadin dreamed of living – a place more accepting of him. We witness some of the relentless bullying and abuse Jadin endured at school and the Principal’s appalling reaction, and we also see his home life: a dad who tries to avoid the issue and a loving mother (Connie Britton) who is not a woman of action.

While on his tribute walk, Joe stops at schools and community centers to tell the story of Jadin and express the importance of kindness and tolerance. Of course, this is also a time for some personal emotional cleansing for Joe … an act of atonement, if you will.

There is a twisty plot device that is evidently supposed to be a surprise, but there was no need to make it such – it would have still worked just fine. One of the best sequences occurs when Joe crosses paths with a small town Sheriff played by Gary Sinise. It’s a cathartic few minutes that allows a fine actor (Sinise) to play the role of a father unloading the burden of guilt.

I didn’t know this true story and I recommend that you don’t read up on it before the film. I’m glad I didn’t because a couple of times the story went in a direction that was completely unexpected. One, a smart director choice. The second, a tragic reality.

Performances were strong across the board. Mark Wahlberg has come a long way as an actor and he delivers an excellent performance here. Reid Miller who plays his son Jaden was also outstanding.

Director Marcus Green (MONSTERS AND MEN, 2018) is working with a script co-written by Diana Ossana and the late, great Larry McMurtry, and though the film touches on some topics of conflict, it does so in a manner that plays comfortably for mainstream audiences. Mr. McMurtry passed away earlier this year, and the two co-writers shared an Oscar for their screenplay of BROKEBACK MOUNTAIN (2015).

The past few years have inspired many of us to face our personal prejudices and perspectives, and this message movie reminds us that homophobia still exists and often overpowers the kindness of others. Jadin’s essay describing being “surrounded by people that hate you” probably hits home for far too many.

Will The Right People See This And Be Impacted By It? Probably Not. Nevertheless, It’s A Moving Story That Deserves To Be Told.