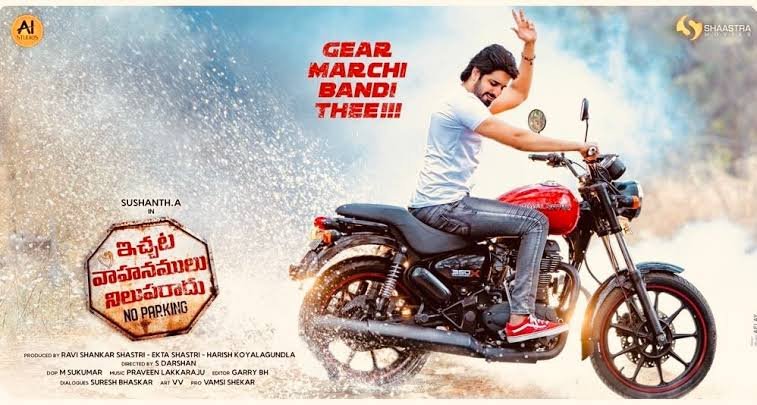 Arun(Sushanth) is an architect who falls in love with his co-worker Meenakshi(Meenakshi Chowdary). As Meenakshi has a small issue, Arun goes to her house to solve it. But in a tragic turnaround of events, a murder happens and Arun gets stuck in the colony with goons after him. How will Arun come out safe from this whole madness is the basic story of the film.

Arun (Sushant) works at an architecture firm and falls for the intern Meenu (Meenakshi). One day when her family is away the couple decide to go on a drive on his new bike. Instead of waiting for her, as instructed, he decides to surprise her at home. He accidently ends up at a house that’s the scene of a robbery and murder. A string of events lead to Arun being suspected with the whole colony on his heels.

The film enters the main point only at the interval mark. Until then, there are way too many forced elements in the film. Things look a bit dragged during the time.

There was a good scope for comedy in many areas but the director failed to utilise it. Though there is comedy, it does not work as expected and things become monotonous.

After a point, things become a bit predictable as the drama is not highlighted that much and the climax is dragged and could have been better.

Sushanth is the life and soul of the film. When compared to his other films, he has vastly improved. He looks handsome and also does well in a performance oriented role. Sushanth was quite good in the second half. Yesteryear hero, Venkat is also good in his supporting role.

Meenakshi Chowdary is quite impressive in her role and shares very good chemistry with Sushanth. Vennela Kishore is hilarious as the showroom manager. Sunil impresses in his cameo and evokes some laughs.

Abhinav Gomatam gets a good role and he is pretty good. Ravi Varma, Priyadarshi, and the other artists have also done well in this thriller. The emotional angle and the thrills in the second half have been designed well by the director.

The music of the film is decent but the BGM was effecive. The camerawork is pretty impressive as the bylanes in which the second half is set, have been showcased extremely well. Dialogues are good and so was the screenplay in the second half.

Coming to the director Darshan, he has done a decent job with the film. He executed a passable story well and narrated it well in the second half. Had he made the first half a bit entertaining with good moments, things would have been even more effective.

On the whole, Ichata Vahanamulu Nilaparadu is a romantic thriller with a decent backdrop. Sushanth does well and the second half is decent. But the dull first half and draggged scenes spoil the fun. When compared to Sushanth’s previous films, this film is surely better and will be liked by those who have an eye for thrillers.

The story of Ichata Vahanamulu Nilupa Radu has potential that’s left unexplored. This one’s a difficult one to sit through.