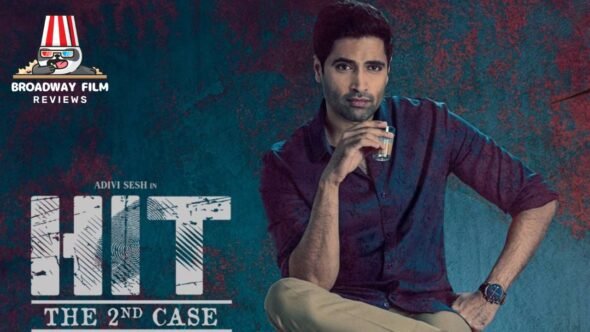 It is the second installment in the HITverse, following HIT: The First Case (2020).

The city of Vizag is stunned by the brutal murder of a young woman. Comes SP Krishna Dev(Adivi Sesh) to solve the case. He investigates the case and even nabs the man behind it.

But in a tragic turnaround of events, Dev comes to know that the killer is someone else. Who is this killer? and why is he targeting only women? To know the answers, you need to watch the film.

Sailesh Kolanu’s “HIT: The First Case” came from nowhere to surprise audiences (including me). The extended compilation of CID  episodes gathered a worthy watch for thriller lovers, and it also showed how good a writer Sailesh is.

HIT: The Second Case may look like an amateur story, as you have certain expectations from a sequel-a burden that doesn’t come with fresh films-but the storytelling, compelling segments, and fine performances by the cast lead you to a nice follow-up to the First Case.

HIT: The Second Case introduces you to HIT (Homicide Investigation Team) officer Krishna Dev, aka KD (Adivi Sesh), who has a knack for catching criminals in no time.

He is super sharp and fast at solving murder cases and is enjoying his live-in relationship with his girlfriend, Arya (Meenakshi Chaudhary).

One particularly brutal case leaves him shattered, and the investigation goes wrong despite his and his team’s brainstorming as they are on a hunt to catch a serial killer.

Will KD manage to cover up the mistakes of the police department and get a hold of the serial killer, whom he once underestimated? Catch HIT 2 in cinemas near you to learn more.

HIT 2 is not a smart script like HIT: The First Case. The film opens with a flashback scene, and then you know it’s gonna be used later in the film, which kills a major chunk of thrills for you.

The script allows the killer to look safe till the end, and then multiple cliches in the climax portion force you to scratch your head over “the hero’s  mandatory victory.”

HIT 1 had a lot of twists on the killer’s identity and kept us guessing till the end. Here, you don’t feel like knowing the killer because there are no substitutes for it, even in a deceptive way.

Usually, we have to wait for the killer to commit another murder so that the cops can link it and find more clues, whereas, in HIT 2, the killer is somewhat like, already done with his job. However, the amateur thriller gets interesting in the second half, as the protagonist seems helpless and the killer starts looking better than him.

He also ends up being right from his perspective. Thank God, there was no drunken protagonist or any personal trauma from his past. A sophisticated character always looks better than a traumatic one.

May he keep doing the same throughout his career, and we will never get bored seeing him in such intense roles. Except for the romantic parts with Meenakshi,  there was nothing wrong with him.

There was less scope for other characters, including the villain, but they have done quite well. Rao Ramesh, Suhas, Komalee Prasad, Posani Krishna Murali, Maganthi  Srinath, Harsha Vardhan, Srikant Iyenger, and Tanikella Bharani look fine in whatever scenes they have.

HIT 2 would have been called a senseless sequel if it wasn’t handled smartly by Shailesh Kolanu’s direction. As I said, he is a fantastic writer, so he knows how to sow the scenes.

Being a writer helps him to analyze and visualize the scenes better. Here in HIT 2, he tries the old trick of deception, which somewhat works, but the ultimate destiny of the film lands safely because of basic vision. Watch out for the climax scene when KD takes a sarcastic yet logically profound laugh at the killer.

Very few thrillers manage to play such mind games out of the blue. HIT: The Second Case is saved there, despite many loopholes in the screenplay. Sailesh could have removed music, romance, and media stuff to keep it cleaner and more vivid.

Nothing is majorly wrong here, so yes, it can be recommended for thriller lovers and fans of HIT: The First Case. Now, get ready for the third case with Nani.

If you’re audiences you will love this film and it will definitely hook you till the end but if you were a fan of the crime mystery genre then HIT2 will be an average crime film with flaws but still, it won’t disappoint you.

Waiting for “HIT: THE 3RD CASE”