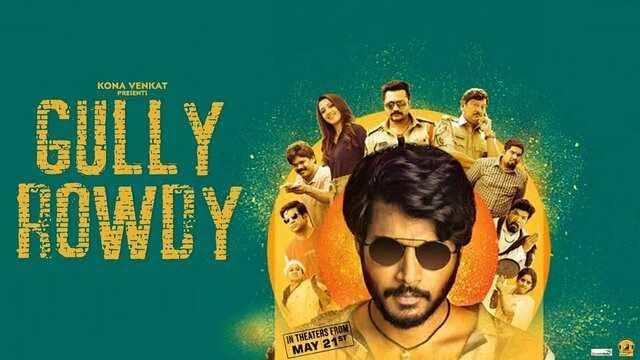 Gully Rowdy is a 2021 Indian Telugu-language romantic action comedy film directed by G. Nageswara Reddy and produced by Kona Venkat and MVV Satyanarayana under the banners of Kona Film Corporation and MVV Cinemas.

Vasu(Sundeep Kishan) belongs to a rowdy family and is forced into gang wars. Things do not stop there as the girl(Neha Shetty) he loves, asks him to save her family using his rowdy background. How will Vasu who hates being rowdy save the family and ends up winning his love forms the rest of the story?

Sundeep Kishan is back with yet another film called Gully Rowdy. The film is out on the big screens and let’s see how it is.

There is no dull moment whenever Rajendra Prasad is around. In this film too, he generates good comedy as head constable Patta Pagalu. All his scenes with his family have been executed well. Neha Shetty is also neat as the female lead.

Bobby Simha is decent in his role and so was Posani. Vennela Kishore evokes some fun in his role. The kidnapping comedy in the first half is showcased well. The actor who played the main villain’s son was also effective.

Last but not the least, Sundeep Kishan once again impresses. He is an effortless actor and does so well in his role. He has an amazing screen presence in the film and holds the proceedings together.

The first half of the film is narrated in a breezy manner and things are set up quite well for the latter part. But the director fails to generate drama and drags the scenes in the second half.

Bobby Simha’s entry makes things interesting but his character is hyped for no reason. The way he interrogates the case is stretched and looks logicless.

Sundeep Kishan is hardly there in the second half and because of this, there is a feeling of something missing in the film. In a way, the comedy is good, scenes-wise, but if you put them in order and watch them according to the script, things look dragged.

The music of the film is pretty good and so was the BGM. Vizag and its surroundings are showcased beautifully by the camera department. Editing is bad in the second half as the climax is dragged for no reason.

Coming to the director Nageswara Reddy, all his films are high on comedy. This film also has passable comedy but the screenplay lacks the impact. Key scenes are let down by some silly narration. If the second half would have been crisp, things would have been quite different.

On the whole, Gully Rowdy is a typical comedy caper with a decent backdrop. The comedy in both halves is good but the rest of the factors like drama and screenplay take a back seat. If you are the one who ignores the routine story and wants to have a good time pass, give this film a shot. The rest can look for something else.