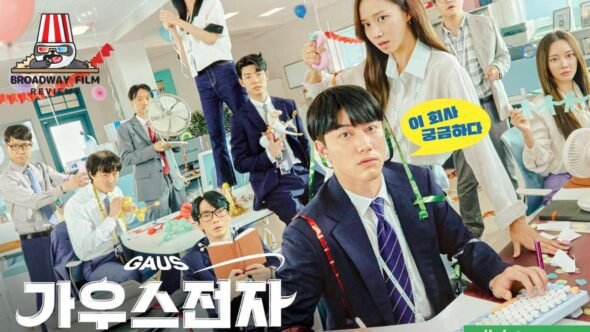 Based On: Gaus Electronics by Kwak Baek-soo

Stress is no stranger to the members of Marketing Team 3 of the home appliance department at the Gaus Electronics HQ. The firm is a busy, multinational company, but this is a team that most workers dream of getting out of – and where chaos is no stranger.

Some 10 employees make up the team. These include Lee Sang Sik, a  man with an upbeat personality who often misjudges his coworkers’  moods, causing trouble as a result. There is also Cha Na Rae, the hot-tempered assistant manager.

Also, Read The Law Café K-Drama Review: Had a promising start…Later It Ended in Formulaic.

Also among their number is Baek Ma  Tan, the heir of the owners of Gaus Electronics’ fiercest rival – Power  Group. He was born with a silver spoon in his mouth and has never known hardship. But he shocked his entire family when he decided to join Gaus as a junior employee.

His polar opposite is Geon Gang  Mi, who comes from more modest origins and has always tried to pull herself up by her bootstraps – pushing herself to succeed at every step. While they seem to have very little in common at first, they slowly begin to form a bond, with possible romance sparks in the air.

After watching a lot of shorts on YouTube, I thought this drama revolves around romance and office comedy. But I didn’t expect this.

It’s a story about office workers, their office as well as their personal life. The story is presented in a very hilarious way that will make your stomach ace because of laughter.

Every single actor here has done an amazing job; their timing of comedy is on point. They will make you laugh with their dialogues as well as with their physical actions. There are some serious moments too which are acted really well by these people.

This is a rowdier, less sardonic Korean version of The Office, with smoldering romance at its center. The series is remarkably consistent in that even its kissing scenes are laugh-out-loud events:  it’s one of the few shows that feature kisses that are both hot and extremely funny at the same time.

Overall, this is definitely recommended. Intelligent, poignant, and yet boisterously funny, Gaus Electronics is one of the year’s best series.