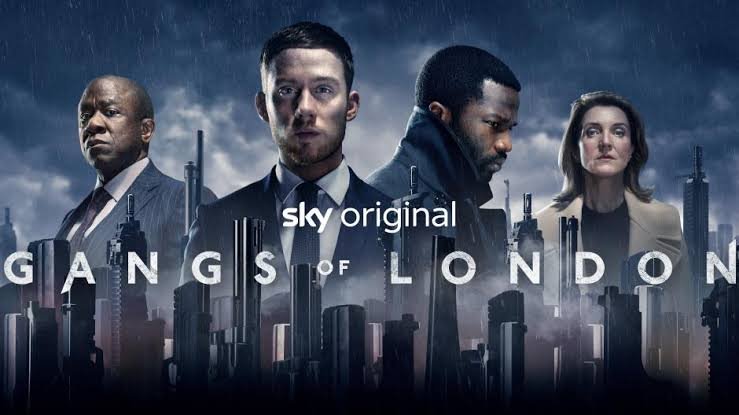 Gangs of London is a British action–crime drama television series produced by Pulse Films & Sister, following struggles between rival gangs and other criminal organisations in present-day London. The first series aired in the UK on 23 April 2020 on Sky Atlantic. The series was created by Gareth Evans, best known for The Raid action crime films, along with Matt Flannery. AMC subsequently announced a deal to take over US broadcast rights and became co-producer for a newly-commissioned second season.

The opening gives a lot away. In the middle of the night, Connie Petersen (Saskia Reeves) nudges her husband Douglas (Tom Hollander) awake and says, “I need to say something. I’ve been thinking about leaving. I think our marriage might be over.” There is no furious argument or angst. Douglas is shocked but very civilized. There is a hitch, though. Connie and Douglas are about to embark on a trip around Europe with their teenage son Albie (Tom Taylor) before he goes off to university.

After some frightfully restrained tensions, they decide to go forward with the trip. In advance Douglas makes a list of things he can do to, perhaps, change Connie’s mind. One item is, “Be organized but maintain a sense of fun.” There follows a traipsing around European capitals that is drenched in gallows humour but at times outright hilarious. Part of the appeal for the viewer is the chance to be with this family as they see Paris, Amsterdam and other capitals. Made just before the pandemic struck, there is a keen sense for the viewer of the loss of freedom to travel.

But in the drama itself what’s clever and captivating is a series of scenes that dramatize how Connie and Douglas met, fell for each other and began a life together. We see young Douglas (Iain De Caestecker) woo young Connie (Gina Bramhill) on the basis that opposites attract. He’s a biochemist and geeky, she’s an artist and very chic. These scenes are beautifully done and you slowly sense the possibility that they were ill-matched from the start, but unwisely fell in love. The four-part series is a true gem; warm, humane and rooted in a very relatable kind of middle-class existence.

Gangs of London  is set in a very different England. The complicated plotting revolves around one Finn Wallace (Colm Meaney), who is a major crime boss. He has formed alliances with others – Albanians, Kurds, Jamaicans, Irish Travellers – and they all facilitate each other, with the Wallace clan being the kingpins. In the opening, Finn is shot dead, but by whom and to what purpose? His son Sean (Joe Cole) is furious and very suspicious about one particular gang. So he stops the family and associates from doing any business until his dad’s murder is solved.

This mean violence verges on mayhem as shady characters are tracked down, beaten or tortured, and, all the while, there’s a guy who has infiltrated the Wallace gang on behalf of the police. Brisk, violent and very interested in how young men try to prove themselves, Gangs of London is a very contemporary gangland epic; seething with male rage and a sense of urban corruption that is visceral.

Not for those who don’t like brutal violence portrayed with gusto. But for those who can take it, the series is really an intriguing chess game about seizing power.

From The Director Of The Raid, and The Raid 2 – Waiting For Season 2