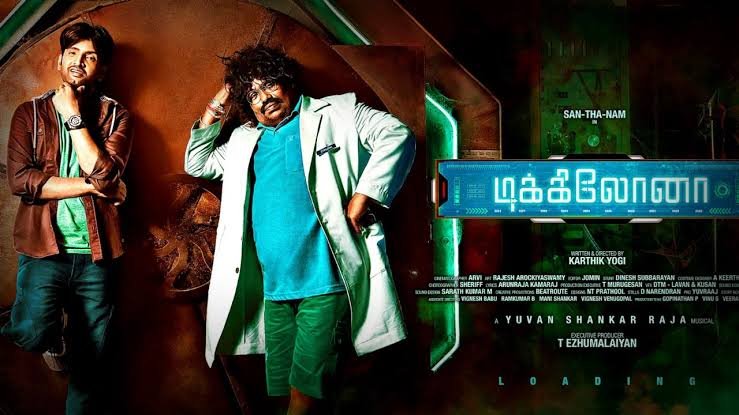 Mani (Santhanam) is an aspiring hockey player, he marries his girlfriend Priya (Anagha) but seven years later, his marriage life hits the rock bottom. In 2027, Mani bumps into his school friend Albert (Yogi Babu), a cleaner in a secret time machine lab operate inside a basement created under a car trunk that carries the name Dikkiloona!

Santhanam shines once again with his brilliant comic timing and counter dialogues, he has improved in the emotional scenes although we can’t call it his best performance. Among the girls,  Anagha is promising and she looks good. Shirin is just okay and her character is a stereotype! `More than the sc-fi angle, the comical situation created by it and the bunch of comedians like Yogi Babu, Munishkanth, Anandaraj, Rajendran, Lollu Sabha Maran, and Chitra Lakshman evoke laughter. The first half of the film is largely entertaining but the second half loses the tempo and picks up the tempo only in the climax.

Yuvan Shankar Raja’s songs and background score helped the film in the required situations. Arvi’s cinematographer has provided a grand look and feel to the film. Director Karthik Yogi has delivered a time pass entertainer, which can be your relaxed OTT watch!