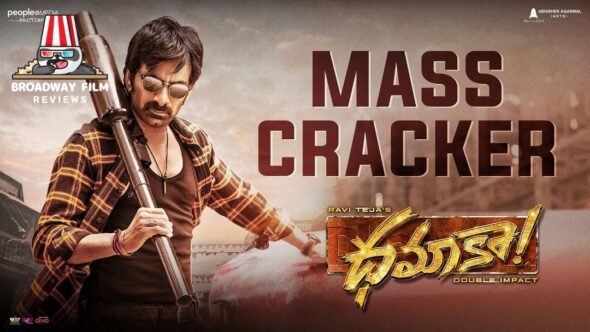 Swamy and Anand who look exactly the same, come from different backgrounds. Under dicey circumstances, Pranavi, a young and pretty girl falls in love with both of them.

How will Swamy and Anand solve their problems? Whom did Pranavi finally choose? Or is there a twist in the tale?

Anand shoulders the responsibilities of running a company and works to fulfill his father’s ambition of making every employee an owner. On the other hand, Swamy, a middle-class lad in love with Pranavi is frivolous and street-smart. He needs a job to get his sister married.

Ravi Teja is known for his infectious energy and impeccable comic timing, and the audience and his fans, in particular, would be delighted with his performance in the film.

The actor, who has played dual roles successfully earlier, including hits Vikramarkudu, has once again essayed a two-shaded character, in Dhamaka. The film is a true-blue entertainer full of action and comedy.

Sreeleela Acting in her second Telugu film as Pranavi mesmerized with her glamour and supple dance moves. The young actress matched the pulsating energy of Ravi Teja, proving herself to be a  bundle of energy.

The beautiful and gorgeous actress is here to steal hearts. The music album dished out by Bheems Ceciroleo with hits like Jinthaak and Mass Raja has already been a chartbuster, translated to entertainment on the big screen, thanks to vintage Ravi Teja dance moves, refreshingly agile Sreeleela and artistic sets.

The riveting BGM in the film aided in amplifying the entertainment quotient. And the routine and the flat plot is the weakling in the grand scheme of things. But the film that it intends to be, from the word, go – a  mass entertainer and masala potboiler, the movie succeeds.

While punchy and humorous dialogues by Prasanna Kumar Bezawada work for the most part and it’s the English dialogues that could have been definitely better.

Although not groundbreaking, the film gets saved by the lively Ravi Teja, charming Sreeleela, and other actors who manage to create enough humor and drama.

Jayaram as JP, Sachin Khedekar as Nandagopal Chakravarthi, Pavitra  Lokesh as Anand’s mother, Tanikella Bharani as Vasudevarao, Tulasi as Swamy’s mother, Rao Ramesh as Pranavi’s father, Rajshree Nair as Pranavi’s mother, Chirag Jani, Ali, Praveen, and Hyper Aadi did their best within their limitations. The camaraderie between Rao  Ramesh and Aadi makes for some rib-tickling moments.

Dhamaka is an action-packed comedy that relies heavily on the mass entertainment quotient. Ravi Teja’s energy and Sreeleela’s glamour make this routine story an entertaining watch.