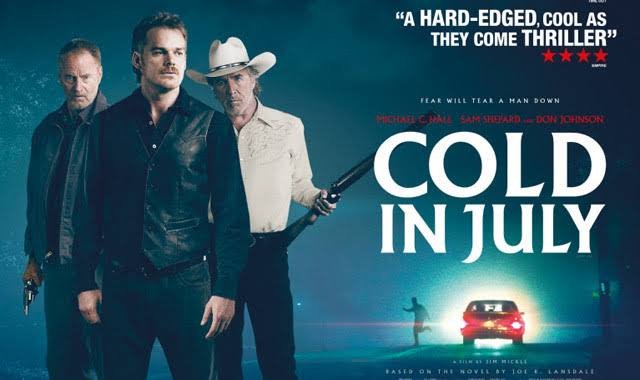 Cold in July is a 2014 American independentcrime drama film directed by Jim Mickle, written by Mickle and Nick Damici, and starring Michael C. Hall, Sam Shepard and Don Johnson. The film takes place in 1980s Texas and is based on the novel Cold in July by author Joe R. Lansdale. Hall plays a man who kills a burglar, whose father (Shepard) subsequently seeks revenge. The plot is further complicated when a private investigator (Johnson) shows up.

Set in 1989 Texas, the film tells the story of a local civilian who’s all over the news after killing an intruder in self-defence, only to find his family being stalked by the ex-con father of the deceased. However, the two soon find themselves being misled by the police & with the help of a private investigator try to uncover the real truth.

Co-written & directed by Jim Mickle, this indie keeps shifting its gear which stacks up pretty well in the end as the aura of tension that’s present in the film throughout its runtime is nerve-wracking. Camera-work is expertly handled, editing is really good, background score nicely compliments the whole narrative & the tone shifts are carried out in a manner that pulls the viewers in than out.

Coming to the performances, the film boasts a badass cast in Michael C. Hall, Sam Shepard & Don Johnson and the trio are fabulous in their given roles. Hall plays an everyman & it is through him that we enter into the story, Shepard chips in with a strong performance as well but it’s Don Johnson who impresses the most & steals every scene he’s in with effortless finesse.

On an overall scale, Cold in July is a tense, gripping & expertly narrated indie that offers an immersive drama which eventually culminates on a highly satisfying & emotionally rewarding note. Worthy of a wider audience & definitely one of the finest films of the year, not to mention one of the coolest as well, Cold in July is certainly worth a shot & comes highly recommended.

A must-watch American future classic that’s worth the time, effort, and watching properly at Big Screen ( If Possible), you won’t regret it.