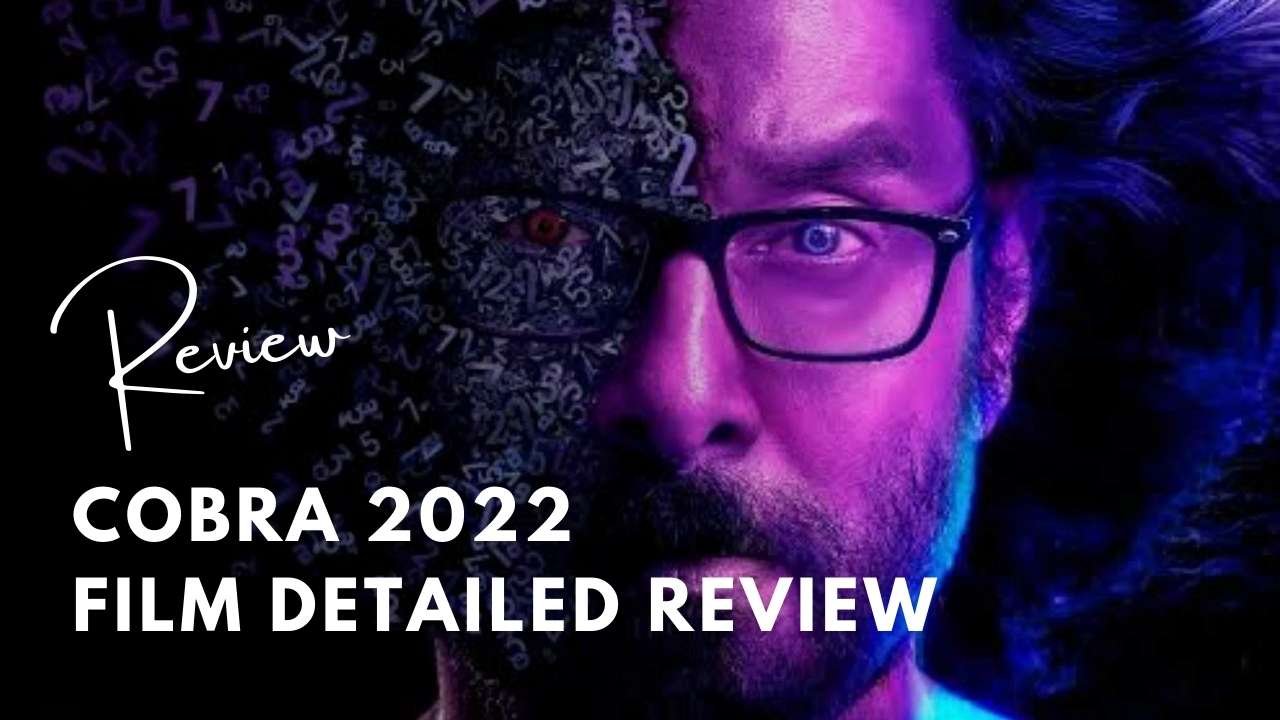 I need to add a few pieces of information before I start a detailed review of Cobra.

I watched this film on First Day and First Show (7 am Show). with only two reasons to watch this film, One Chiyaan Vikram because, after Anniyan, Vikram did 15 movies, except Deiva Thirumagal 2011.

No other films succeed at the box office. There are only a few actors who give life to the characters they portray.  Vikram is one of the rare actors who never disappoints with his acting. So, everyone is waiting for his strong comeback with Cobra.

The Second reason, is Ajay Gnanamuthu as he proved himself with Demonte Colony his debut film which went on to become one of the blockbusters of 2015. And his second film imaikka Nodigai 2018 was critically and commercial success.

He proved himself with his writing skill. The way he maintained the suspense and commercial elements are Top- Notch.

When the official announcement came from the production house, within a short time the film ranked among the most anticipated films.

The film nearly took 3 years to complete because of the pandemic and Vikram’s commitment to the Mahaan movie. Finally, the makers announced the release date of 31st August 2022.

I booked the 7 am Show (First Show) near to my house. On that day, there was rain, still, I went into. Exact 7 am, the film started.

The first reaction was mixed. Mainly about the second half and the climax. completely I didn’t like but there are a few portions I enjoyed well.

A few days later the movie was trimmed to 20 minutes from 3H:3M. I went again for the second time, after watching the film I felt the first time was better than the second time. They trimmed important scenes.

Yesterday Cobra got an OTT release in SonyLiV. I gave it another shot because my mother wanted to watch the film. So, I sat and watched again for the third time. This time I found out what went wrong with the film. if you want to know about it read the full review below.

The First Half has flaws still I completely enjoyed it. Ajay Gnanamuthu completely understands Vikram’s capabilities and has written a few scenes for Vikram’s Hunger and the audience.

And The Scotland prince’s assassination and Russia’s defense minister’s assassinations are an eye feast for fans and the general audience. And we see intelligent writing from Ajay Gnanamuthu

One of the most liked sequences is when a criminology student explains how Cobra killed the Chief Minister of Odisha throw animation was mind-blowing and Her talk about Cobra’s true nature was amazing.

The First Half ends with another Vikram who helps the police to find the Cobra. The first half has everything suspense, love track, emotions, complex Characterization, hidden details, and maths-related killing.

The real problem of the film starts in the second half. Except for the rain fight and Police Station hallucinating comedy sequence, other scenes and sequence are painful to watch and makes you bored.

The second half is messy with flashbacks, unwanted love stories, mother sentiment, and hallucination scenes. And most painful sequence was the climax.

One of the worst climaxes I watched in recent times. Not even Vikram’s committed performance can save the film or us. There are a lot of stories combined in one film.

An Assassin who commits intelligent crimes using maths. An unknown person helping the police through his hacking skill. A criminology student who has equal iQ as Cobra (Killer) helps the police to capture the Cobra. Mathi who suffering from Haiiucination from his past.

Each story is good when we think but combined to produce a good complex story into a screenplay is difficult. And Ajay Gnanamuthu faiied in that. if you think it’s difficult to write a complex screenplay then no as Christopher Nolan achieved his Complex writing into success like Memento, Inception, The Dark Knight, insomnia, and Tenet.

I felt like Cobra was a 5hr movie trimmed into a 3hour movie. Many portions leave you confused and you have to fill the gap to understand. Cobra being too ambitious is both a boon as well as a bane.

The ambitiousness shows off in the film’s attempt to push the scale in terms of grandeur, which is visible in most of the first half. it is also visible in the writing, especially when the film uses theories from mathematics to making the crimes very interesting.

Unfortunately, the stretches of brilliance are short-lived as the film does get predictable towards the end. There are instances where the film tries too hard to look ambitious, and this is also one of the reasons why the narrative after a plot twist never holds up.

Mainly the writing is weak, even the Protagonist Characterization is weak and the arc doesn’t go anywhere. There is no potential for each character to be stand alone but Ajay decided to focus more on Vikram and his acting.

There are a lot of characters that go waste or are not used properly. Especially the Criminology student arc doesn’t go anywhere in the second half. She was used to filling the gaps in the screen. Another worst-written character is Antagonist.

The film needed better casting. Apart from Vikram, who shines in yet another hand-picked, the rest of the supporting cast barely makes any impact.

Roshan Mathew, who is generally effortless and quite convincing so far in his career, hams it up big time in a largely annoying negative role poorly written character that turns irksome after a point.

Cobra is such a film that has been inspired by Hollywood films but miserably failed in execution because of the complex storytelling. But watch it for Vikram’s performance.