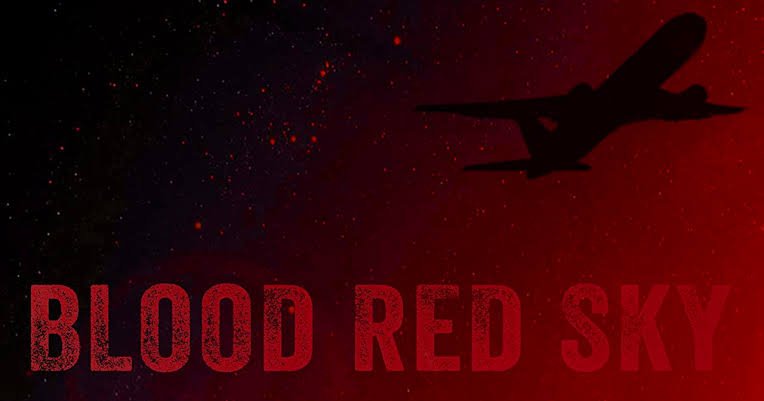 Blood Red Sky (also known as Transatlantic 473) is a 2021 actionhorror film directed by Peter Thorwarth, who co-wrote the screenplay with Stefan Holtz. The film stars Roland Møller, Peri Baumeister, Chidi Ajufo and Alexander Scheer. It was released on 23 July 2021 by Netflix.

I sat down to watch the 2021 movie “Blood Red Sky” as I stumbled upon it on Netflix, and I must admit that it sounded interesting and the movie’s cover/poster definitely helped win me over.

And I will say that writers Stefan Holtz and Peter Thorwarth definitely managed to write an entertaining enough story.

While it started out fairly slow, it was a great setup, because the writers were excellent at setting the scene and carving out the characters, getting the audience to know the characters and have a connection with them. And then slow, feeding the audience tiny bits of what was going on and going to happen. So there wasn’t a dull moment throughout the course of the movie.

The movie definitely has a good ensemble of actors and actresses to portray the various roles and characters in the movie. I am not familiar with actress Peri Baumeister, but she really performed quite well in this movie. Now, I am not a fan of actor Dominic Purcell in any way, but he seemed rather out of place in this movie, especially in comparison to all other actors around him. And I feel it was a shame that actor Graham McTavish wasn’t given a larger role to play, because he could definitely had added a lot more to the movie.

Visually then “Blood Red Sky” is quite impressive. I especially liked the design of the vampires, and how they became more and more bestial as they lost more and more touch with their humanity. That was just phenomenal. And the special effects team definitely worked their craft well here.

“Blood Red Sky” turned out to be rather entertaining. And I am rating it a six out of ten stars. If you enjoy action-packed vampire movies, then you should give “Blood Red Sky” a chance.