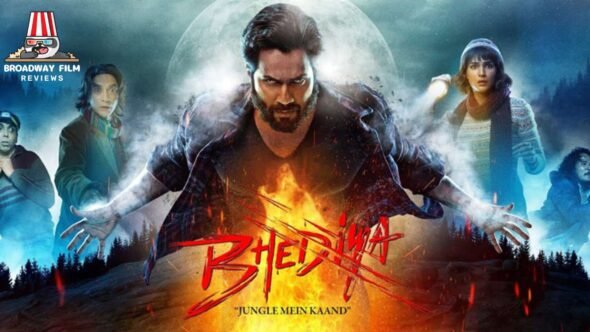 It is the third installment in Vijan’s horror-comedy universe, and also Varun Dhawan and Kriti Sanon’s 2nd collaboration after Dilwale(2015)

Bhaskar gets a road-building contract from an infrastructure company where he has to travel to Guwahati he decides to take his cousin Janardan along and is also accompanied by his local friend Joe.

Bhaskar meets a local Mr. Panda who believes his project is quite impossible as building a road between the jungle will hamper nature as well as the lives of tribal but some corrupt government officials are along with him.

One night, while Bhaskar, Janardan, and Joe are traveling their car breaks in the jungle where Wolf bites Bhaskar on his butt and Joe decides him to take to the hospital of Vet Anika.

After the incident, Bhaskar’s behavior changes while also feeling a change in his internal body where  Janardan suspects he is turned into a Were Wolf but Joe and  Anika ignore it.

The next day Wolf attacks a local youth leader who favored Bhaskar and, forged papers to get the people’s land, after the attack, the tribal believe that it was an animal attack and that Vishanu (Werewolf) is back.

Jana and Joe find that there is the presence of animal substances in their blood reports of Bhaskar and decide to check on him until they face the horror that Bhaskar indeed turns into a  Were Wolf at night.

8 decades after George Waggner’s iconic werewolf film, “The  Wolf Man” (1941), Amar Kaushik takes up the same subject for a  social message set in the forests of Arunachal Pradesh.

Varun Dhawan gets into the shoes of Lon Chaney Jr.’s memorable character of a werewolf, while Kriti Sanon is not what the other ladies played in that film.

Kaushik’s horror universe started on a solid note with “Stree” (2018), but then the humdrum attempt by Hardik Mehta,  “Roohi” (2021), brought black clouds of tension over the emerging cinematic universe.

I really thought that Amar Kaushik was the only person who could have brought the horror universe back on track, but it seems that I was putting up a lot of expectations on him.

Bhediya tries too hard to become Stree (with a creature instead of a  ghost) but surrenders to its inorganic humor and repetitive conflicts. As Bhediya tells the story of Bhaskar (Varun Dhawan), who goes to  Arunachal Pradesh to acquire land set in the jungle.

Bhaskar gets bitten by a wolf on a very special yet magical night that happens once a year in a special place (don’t ask where, if you have seen it in the trailer).

The Bhediya’s bite makes him stronger, and he senses the characteristics of the wolf, therefore turning into a werewolf at full moon nights.

His friends and Dr. Anika (Kriti Sanon) try to find a  way to turn him back into a human. Bhaskar and his friends meet a  gypsy (yes yes, the same kind of gypsy sorcerer Maria Ouspenskaya played in The Wolf Man), who gives them a brainstorming but the funny idea as an antidote.

Will Bhaskar succeed, or will there be any more surprises in store for him?

Bhediya is the same story of the werewolf bundled into socialism’s package. It’s not a copy of The Wolf Man or a remake; we have that tale from an ancient period in our books; it’s just that George Waggner’s film was the first cinematic adaptation of the legendary horror tale.

What Niren Bhatt has done with Bhediya is that he has Indianized the story with comic surroundings and funny characters, a boring romance, and banal cultural lectures, and the mix is somewhat messy.

Unlike Stree, Bhediya is barely funny. A lot of drag and flaws in the screenplay make you lose grip over the narrative, and then you start finding diversion by checking out 3D  glasses, rearranging them, and cleaning them.

A flawless screenplay like Stree comes once in a decade, and as we have seen horror comedies like Roohi, Bhoot Police, Bhool Bhulaiyaa 2, and Phone  Bhoot fail to match it, we might have to wait until 2028.

Or will Stree 2 make a surprise entry before the scheduled time?

Also Read Brahmāstra Movie Review: not a Landmark film but an enjoyable and Good film

Varun Dhawan transforms into Bhediya, and all those scenes give you chills. However, the comic timing and the rest of the appearance remain average.

He just seemed like a miscast or miswritten character for a moment. Post Mimi, everyone started taking Kriti Sanon seriously.

Even though she had roles like Hum Do Hamare Do and Bachchan Pandey, we still believed that she could get back to Mimi’s Zone anytime she wanted if the script allowed.

Well, Bhediya  is not that script. Actually, it doesn’t even provide her with regular screen time. That’s so unfortunate, even if she had a big surprise in store for the fans.

There are only two guys who look, sound and behave funny in the film, and they are Abhishek Bannerjee and Deepak Dobriyal. The rest of the cast hardly appears to be performing, so let’s not discuss the names here.

Talking about 3D effects, Bhediya jumps high. The film is designed for 3D viewing, and the scenes are shot keeping that in mind. The visual effects are good, especially the werewolf transformation scenes (yeah, they might remind you of Rahul Roy’s Junoon).

The background score and music work in parts. Kaduna Thrillu Thanada is a time-pass number; Ellam Oka Va is a friendly rap number, and Ennakai Pirathavale Neeya is melodious but comes at the wrong time.

Jishnu Bhattacharjee’s cinematography will show you beautiful nature from the top view, side view, and even the night view. Amar  Kaushik as a director has got a step lower than Stree and Bala.

Come on, man, this was not expected from you. We hardly have one or two promising directors from the younger generation in Bollywood, and when one of them is doing faith-breaking work like this, it definitely hurts the movie buff in me.

Bhediya could have been cleaner and sharper, but Kaushik does unnecessary and unwanted stuff to bring it down. That organic humor, like Stree and Bala, is badly missing.

Don’t see any reasons why someone like Amar Kaushik would need the kind of “below the belt” humor and cheap jokes we see in Sajid Khan or Farhad Samji movies.

Bhediya couldn’t hunt that myth of Bollywood filmmakers and, hence, remains at an average height. This one was expected to reach the top of the roof but jumped down somewhere close to the side windows.

Watch it for some laughs and a few visually amazing scenes. Dinesh Vijan’s horror universe seems to be in trouble again. They desperately need Stree back!

Josée 2020 Movie Review: A Story That Leaves A Lingering Impression

Thunivu Movie Review 2023: Not Heist Movie, It Just Only a Bank Scam