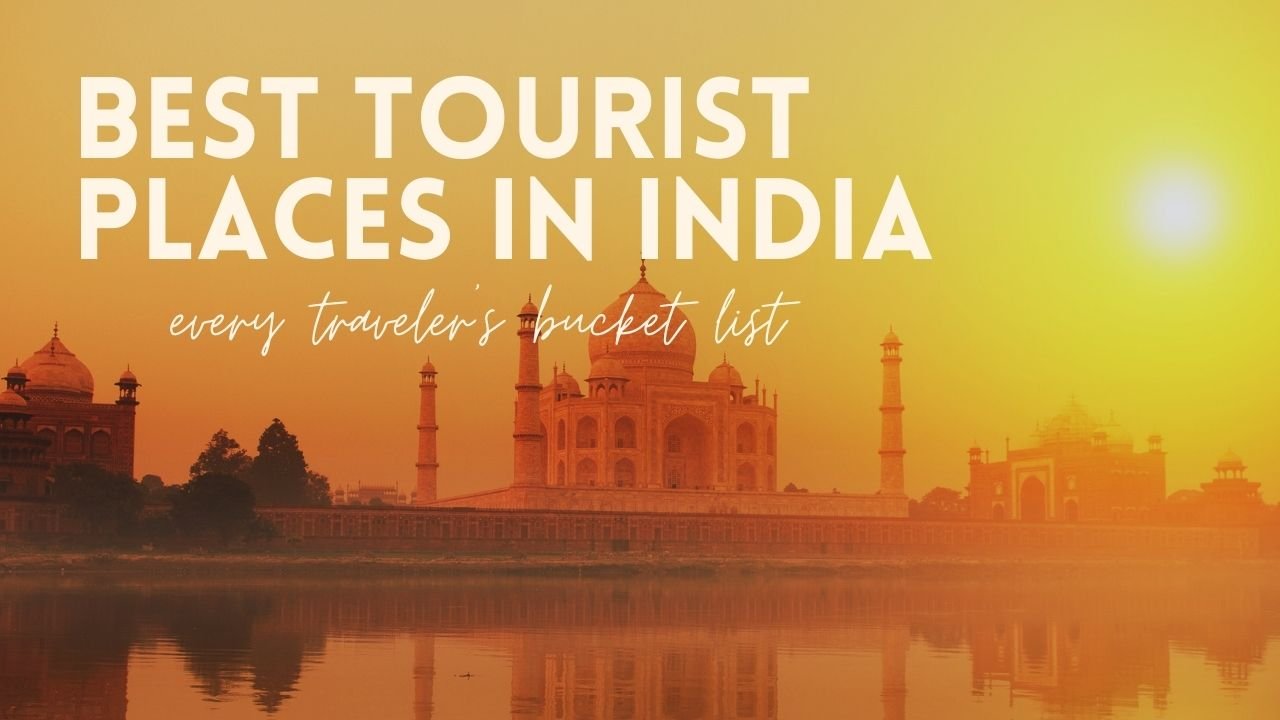 India is one of those destinations that ends up on every traveler’s bucket list at some point. Deeply traditional yet endlessly surprising,

They might dream of going to Agra to see the Taj Mahal in all its glory or exploring the royal palaces scattered throughout Rajasthan.

Others find themselves attracted to the jaw-dropping landscapes in Darjeeling and Rishikesh or the postcard-perfect beaches in Goa.

India’s big cities Like New Delhi, Mumbai, Hyderabad and Kolkata—each of which has its own distinctive personality.

The hardest part of traveling to India is figuring out exactly what to see on your journey.

Whether you’re going on an epic backpacking trip or a luxe vacation, plan your adventure with this list of the Best Tourist Places In India

The monument inspires millions of tourists to make the trip to Agra every year, waking up before dawn to see magnificent structures radiate at sunrise.

But Agra tops the list of the best places to visit in India for reasons that go beyond India’s most famous attraction.

The city in Uttar Pradesh is chock-full of marvelous Mughal monuments, like Itimad-ud-Daulah’s Tomb and Akbar’s Mausoleum, decked out in hypnotic inlaid marble designs from top to bottom.

Plus, tourists can also see another UNESCO World Heritage Site: the Agra Fort. With so many wonders in just one place, Agra is a must-visit city for tourists in India.

New Delhi offers tourists a lot to love. The colorful capital of India is the perfect mixture of heritage and modernity. Old Delhi contains some of the country’s most treasured attractions, including the Jama Masjid, Red Fort, and Chandni Chowk shopping thoroughfare.

But throughout the sprawling city, tourists can explore countless other sites of spiritual and cultural importance.

Fill your days exploring these mesmerizing sites, and refueling at street-side chai stalls and high-end restaurants.

Energetic, coastal city of Mumbai—home to ultra-wealthy entrepreneurs and the hottest Bollywood actors.

Tourists are never far from five-star hotels or gourmet restaurants in this luxe city.

And even if those activities are out of budget, a cruise down the beloved Marine Drive will make you feel like royalty as you catch a glimpse of the scenic coast and glamorous Art Deco buildings.

You can also see a more authentic, local side of Mumbai in the bustling “Thieves Market” or at the Churchgate railway station, where hundreds of thousands of homemade lunches are packed up for delivery to the city’s office workers every day.

Make sure you devote a day to checking out Sanjay Gandhi National Park and exploring the 2,000-year-old Kanheri Cave carvings.

Translated to “Land of Kings,” Rajasthan brims with remnants of the kings and queens of past centuries.

Between its glittering palaces, stately forts, and lively festivals, this western state deserves a starring role in your trip to India.

Jaipur, part of the Golden Triangle Tourist Circuit, which also includes Agra and New Delhi, is one of the top places to visit in Rajasthan.

And Jaisalmer looks like an Arabian Nights fairy tale brought to life, with its yellow sandstone structures and historic Havelis (mansions).

No matter where you end up in this desert state, you’ll be captivated by the magic of Rajasthan.

Rishikesh has been on the radar for spiritually minded travelers since the late 1960s, when the Beatles spent time in Maharishi Mahesh Yogi’s ashram—now an abandoned site that has become an off-the-beaten-path tourist attraction for fans.

The town is nestled in the foothills of the Himalayas on the banks of the holy Ganges River, and serves as a center for yoga and pilgrimages.

Take part in the action, or just enjoy the sounds of the temple bells and sightseeing from Rishikesh’s two suspension bridges, often guarded by assertive families of monkeys. Keep your distance.

One of the oldest continually inhabited cities in the world, Varanasi is arguably the holiest place in India.

Tourists, on the other hand, find their own flavor of spiritualism taking sunrise boat rides, releasing floral blessings that float on the river, and watching the fire-filled Hindu chanting ceremonies from the steep ghats.

Away from the water, the streets of the old town twist and turn like an endless maze.

Legend has it that there’s still no accurate map of Varanasi, and once you experience the labyrinthine city for yourself, you’ll be inclined to believe it.

Amritsar, the “Jewel of Punjab,” has made its claim to fame with its remarkable Golden Temple.

One of the holiest places in the world for Sikhs, the gilded structure is a sight to behold, glistening in the sun and reflecting into the large pool that surrounds it.

The attraction also boasts the world’s largest community kitchen, which serves 100,000 diners (including curious tourists!) lentils and curries every day.

While in Amritsar, plan to spend an afternoon at the border of Pakistan to see the Beating Retreat Ceremony.

Goose-stepping guards from long-term rivals India and Pakistan open and close the border gates at dusk in an over-the-top ceremony you’ll never forget.

Get there early to dance to blaring Bollywood music with locals in the streets.

India’s not just full of big cities and holy sites—it also has incredible beaches down south in Goa.

Its stretches of golden sand along the Arabian Sea offer something for every type of tourist, whether you’re interested in hanging out with the backpacker crowd in laid-back beach huts or having a ritzy tropical getaway at a five-star resort.

One unique part of Goa is its blend of Indian and Portuguese cultures.

You’ll experience the fusion throughout the destination, from its Baroque architecture and cathedrals to its spicy vindaloo curries and seafood dishes.

Head south of Goa, and you’ll trade beaches for tranquil backwaters in Kerala.

Nothing beats the experience of hopping aboard a traditional thatched-top houseboat in Alleppey (also known as Alappuzha) and slowly floating through palm-fringed lagoons and rivers, either as a day trip or overnight adventure.

Easygoing Kerala is like a breath of fresh air from the intensity of cities like New Delhi and Jaipur up north. Schedule some time here when you’re in need of a break from the chaos.

Sightseeing in India doesn’t get much better than what you’ll discover in Darjeeling. The hill station in West Bengal is beloved for its lush green tea plantations, awe-inspiring snow-capped peaks (including Khangchendzonga, the world’s third-highest mountain), and serene Buddhist monasteries.

This is the perfect place to arrange a mountain trek or mountain biking adventure.

One of the most popular things to do in Darjeeling is taking a ride on the Darjeeling Himalayan Railway.

Powered by an antique steam locomotive, the 140-year-old “Toy Train” takes tourists on two-hour fun rides from Darjeeling to Ghum—a journey that’s regularly counted as one of the most scenic train rides in the world.

The top things to do in Kolkata include seeing the Victoria Memorial, a white marble monument that features a museum with dozens of galleries, and Park Street, a famous thoroughfare with shops and restaurants that bustle 24/7, especially during the holidays.

But Kolkata is as much about the sites as it is about the emotions.

This is a city that will somehow induce every one of your emotions with the highs and lows of life taking place in plain view on every street. Brace yourself, and be open to the experience.

When the temperatures skyrocket in New Delhi and other cities in North India, tourists and locals alike make their way to cooler climates in the hill stations, the most popular of which is Shimla.

The cloudy weather and forested hillsides make for a satisfying escape from the heat, as well as a placid place to spend a weekend or more.

The atmosphere in the hilly central part of town, where traffic is banned, is just as pleasant as the scenic outskirts.

While you’re in the area, make a reservation on the Kalka-Shimla Railway, a UNESCO World Heritage Site.

The 96.6-kilometer-long railroad, which has been running for over a century, is renowned for its stunning views and authentic vintage experience.

Hyderabad is the capital and largest city of the Indian state of Telangana. situated on hilly terrain around artificial lakes, including the Hussain Sagar lake, predating the city’s founding, in the north of the city center.

Everyone knows about the Best historical places in Hyderabad that includes The Golconda Fort, Ramoji Film City or The Charminar, and the list goes on with places that are bustling with tourists all around the year.

However, this article shares an overview of the lesser known and offbeat places to explore in Hyderabad that can give you a feeling of peace and contentment.

Check Out: Hill Stations Near Hyderabad For Weekend Road Trips

While culturally different, South India is as enchanting as the north—just visit Mysore to see for yourself.

The third-largest city in Karnataka is considered to be the cultural capital of the state, celebrated for its high-quality silk, Mysore painting tradition, and hypnotic Hindu temples with deity carvings that nearly touch the clouds.

Most tourists visit Mysore to see its World Heritage-listed palace. This attraction takes Indian grandeur to the next level, with endless mirrored decor, stained-glass windows, carved wooden doors, and intricate mosaic floors that look like the inside of a kaleidoscope.

The palace is considered to be one of the country’s finest examples of Indo-Saracenic design. Be sure to swing by to see the palace at night, when it’s lit up with thousands of twinkle lights.

How Hiking Can Be Romantic Idea For Dating