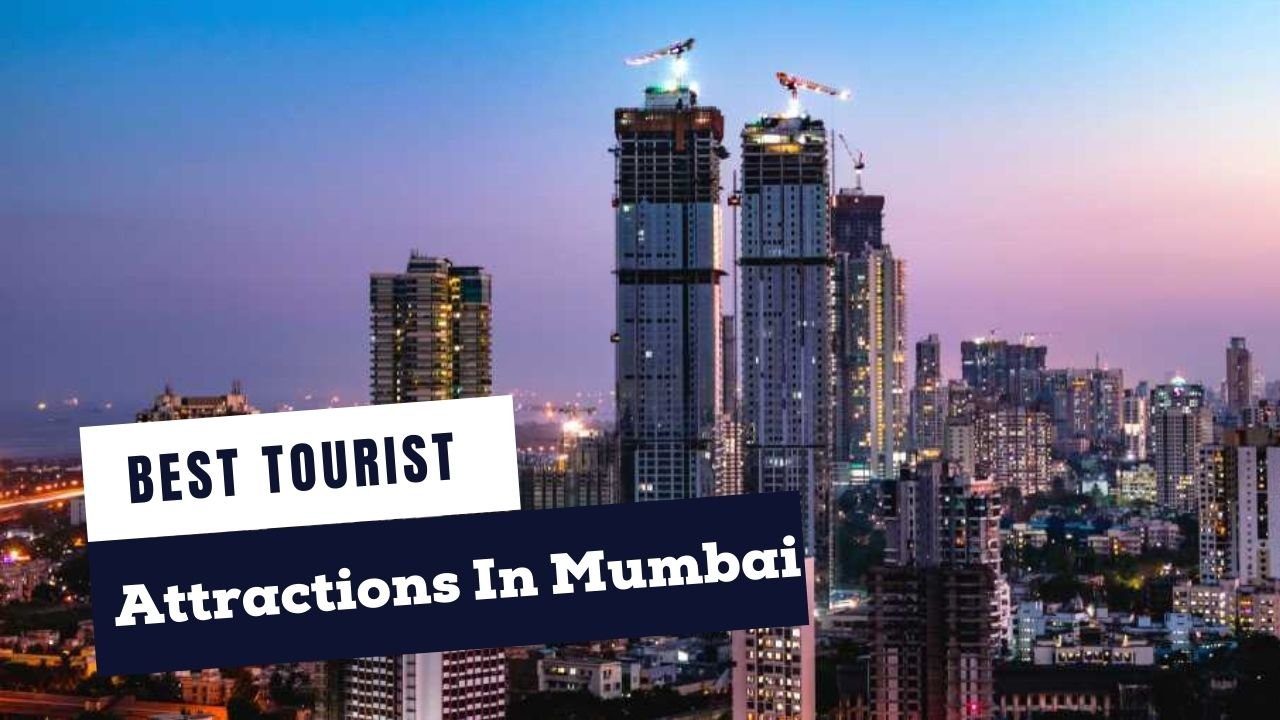 Mumbai is a city of contrasts. Arguably India’s most cosmopolitan city, it brims with gourmet restaurants, five-star hotels, the fancy living quarters of Bollywood megastars, and renowned attractions.

The swirling colors of the bustling “Thieves Market,” and people of all walks of life enjoying the sunset from the sugary sand at Marine Drive Chowpatty. Mumbai is equal parts overwhelming and inspiring, and you’ll never forget your first visit to this city.

The 26-meter basalt archway, which combines the architectural styles of Roman triumphal arches with traditional Hindu and Muslim designs, was built as a gesture of welcoming King George V and Queen Mary when they visited British India in 1911.

Ironically, it was under this very archway that the last British troops exited India in 1948 after the country declared its independence from Great Britain.

Nowadays, the Gateway of India is one of the most popular gathering spots in Mumbai for tourists and locals alike. Watch the yachts and ferries take off to sea from the five jetties that flank the arch.

Enjoy some of the famous bhelpuri (a crunchy, savory snack made of puffed rice and doused in tamarind sauce) from the street food vendors. Or just spend an hour or two people-watching at this lively attraction.

Afterward, walk 10 minutes southwest to the Colaba Causeway Market, a vibrant bazaar selling everything you can imagine and more. It’s one of the best places for cheap shopping in Mumbai.

The 3.6-kilometer-long, C-shaped boulevard offers epic views of the coast. However, just as amazing are the sightseeing opportunities on the other side of Marine Drive. The street is lined with stunning Art Deco buildings that have earned status as a UNESCO World Heritage site.

After your mini road trip, head out on foot for some more sightseeing along the Marine Drive promenade.

And The best time to go is at sunset. That’s when tourists and Mumbaikars gather on the sands of Girgaum Chowpatty to see the cotton candy skies fade to dark while noshing on Mumbai’s famous street food from nearby stalls.

One of Mumbai’s most iconic sites is a cable-stayed bridge known as the Bandra-Worli Sea Link.

Opened in 2009, the eight-lane bridge connects the central business district with the western suburbs over the open sea, offering some much-needed relief from the congestion on the Mahim Causeway.

It has become the Mumbai equivalent of New York’s Brooklyn Bridge or Sydney’s Opera House.

For the most impressive views of the Bandra-Worli Sea Link, head to the Bandra Fort, a historic watchtower built by the Portuguese in 1640 also worth driving across the bridge, as well.

By day, you can see the crashing sea on both sides of the bridge. And at night, watch the bridge light up with spectacular colors.

Tourists can find another popular site right near the Gateway of India: The Taj Mahal Palace, Mumbai and Tower. More than a century old, India’s first luxury hotel is revered for the grandeur of its brownstone exterior.

Fun fact: The Taj Mahal Palace, Mumbai hotel is one of India’s most photographed places.

Walk by and snap your own picture from street level. Or, better yet, step inside the hotel’s colonial-style restaurant, Sea Lounge, in the afternoon for an elaborate high tea.

While Mumbai may look like a shiny, modern city at first glance, it also has some ancient sites that will leave you in awe.

Spend a day at Sanjay Gandhi National Park exploring the Kanheri Caves, a complex of monuments that were carved out of the basalt formations around 2,000 years ago.

Inside the 109 cave entrances, you’ll see large stupas (a hint that this was once a sacred place for Buddhists), congregation areas, and prayer halls. Look for the incomplete paintings of the Buddha on the ceiling of cave 34.

Now, The Visiting of Chhatrapati Shivaji Maharaj Vastu Sangrahalaya Museum is also high on the list of the top things to do for tourists in Mumbai.

Previously known as the Prince of Wales Museum of Western India, this is one of India’s most important art and history attractions.

You’ll need at least a full day to take in the museum’s expansive permanent collection of 70,000 items, which include Indian miniature paintings, Himalayan art, antique Asian coins, jeweled swords, and much more.

Afterward, poke around the streets of the Fort neighborhood near the museum—they’re filled with stunning Gothic buildings.

Discover Mumbai’s peaceful, quiet side at the Global Vipassana Pagoda. Inspired by Myanmar’s Shwedagon Pagoda, the colossal 96-meter-high stupa is covered in real gold that gleams in the sun.

Also, The hollow pagoda features a massive hall with room for 8,000 people to meditate in tranquility together.

Not sure how to meditate? Take one of the free 10-minute-long Anapana meditation courses offered at the pagoda continuously throughout the day.

Many Hindus have their favorites of the religion’s 33 million gods. Devotees who favor Ganesha (the potbellied deity with the elephant head who is known as the “remover of obstacles”) make pilgrimages to the Shree Siddhivinayak Temple.

Slip off your shoes and head in to see the idol of the deity, draped with marigold garlands and offerings, with hundreds of other visitors eager for a glimpse (and perhaps a granted wish). It’s a cultural experience like none other.

And if you’re interested in other sacred places dedicated to Ganesha, check out the Vazira Naka Ganpati temple and the Garodia Nagar Ganpati temple.

Gandhi is one of India’s most revered figures, and there’s no better place to learn about him in Mumbai than at the Mani Bhavan Gandhi Museum.

And The building traces its history back to the anti-colonial nationalist himself, when Gandhi made it his local headquarters for nearly two decades, beginning in 1917.

Tourists can pay tribute to the Indian hero at the Gandhi statue within the museum, see vintage photographs of Gandhi lining the staircase, and catch a glimpse of two of his famous spinning wheels.

There’s also a room on the second floor of the museum that displays paintings depicting important moments in Gandhi’s life.

Mahalakshmi Temple is one of Mumbai’s oldest and most famous temples. Dedicated to Lakshmi, the Hindu goddess of wealth, this temple draws crowds through its ornate gate and into the shrine with the idol.

Visitors will also spot idols of other deities, including Tridevi (the patron deity of music and education) and Kali (the goddess of destruction), adorned with gold ornaments.

For another spiritual attraction, take a trip to the Haji Ali Dargah, a floating Muslim shrine just a 15-minute walk from the Mahalakshmi Temple.

Bollywood, India’s largest film industry, has been rooted in Mumbai since the 1930s when the Bombay Talkies movie studio was founded in the city.

And Bollywood now churns out as many as 1,000 movies each year, ranging from historical epics and curry westerns to courtesan films.

You can get a behind-the-scenes look at this blockbuster factory on a full-day private Bollywood tour.

On this adventure, tourists will explore two Bollywood film studios, take photos with the stars (subject to schedule availability), see Bollywood dancing and learning some choreography, and take a drive through the posh community where the top Bollywood actors and actresses live.

A popular day trip from the main city of Mumbai is a visit to Elephanta Island, a UNESCO World Heritage Site in the Mumbai Harbor.

The attraction is home to rock-cut cave temples honoring the Hindu god Shiva. Roughly 1,600 years old, the archeological marvel lays out a series of temples in a maze-like mandala pattern.

Inside, you’ll discover carvings that explain the stories of Hindu myths. The crown jewel of the main temple is a six-meter-high, three-faced Shiva statue.

Ferries to Elephanta Island depart roughly every 30 minutes from the Gateway of India and take about an hour.

No matter how obscure your shopping list is, you’ll probably find everything on it at the Chor Bazaar.

Translated to the “Thieves Market” after the legend that all stolen goods in Mumbai end up for sale here, the Chor Bazaar is one of the biggest attractions for tourists, as well as the go-to place for picking up cheap goods.

Pro tip: The side streets around the Chor Bazaar are home to some of the best kebab sellers in Mumbai.

Best Places To Visit Near Hyderabad