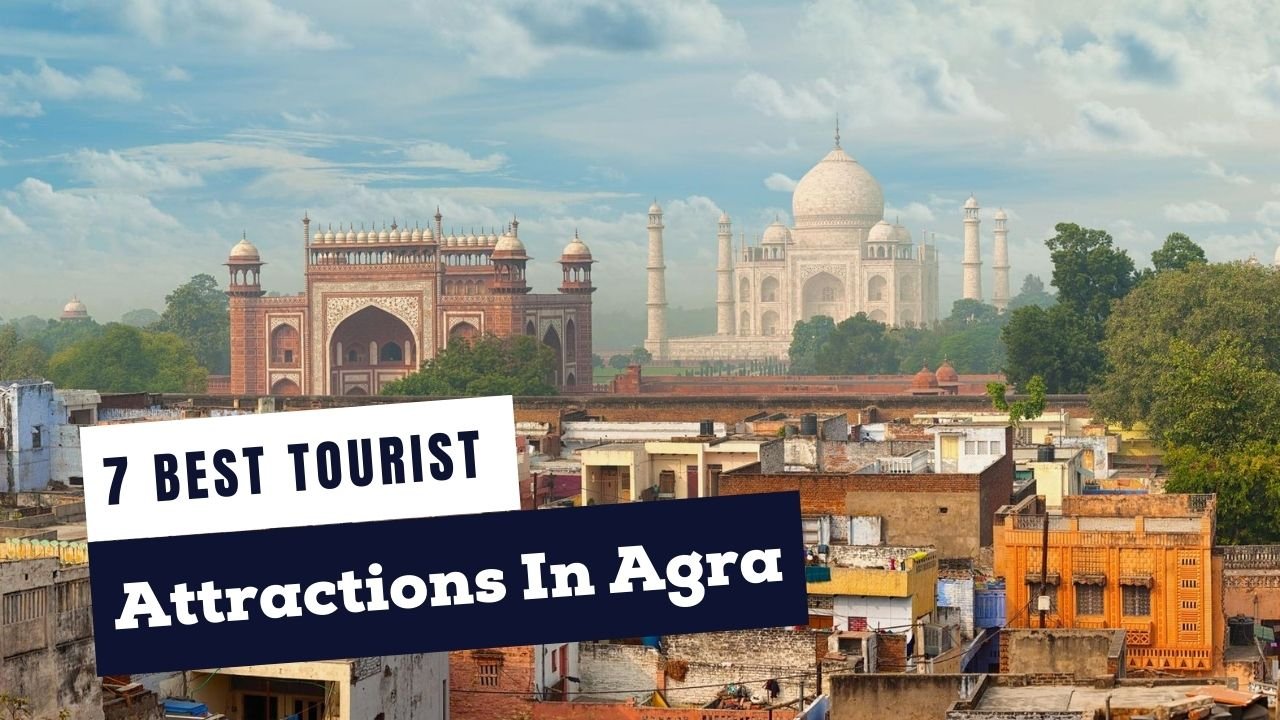 The Taj Mahal is an icon of India, drawing millions of tourists to the city of Agra every year. T

his breathtaking landmark is every bit as incredible as you’ve imagined. But while most travelers might be eager to escape Agra’s pushy touts and exhausting crowds as soon as they’ve left the Taj Mahal, you should consider sticking around a bit longer.

Also one of many amazing places to visit in Agra. While here, you can explore the historically significant Agra Fort

Experience the impressively beautiful Tomb of Itimad-ud-Daulah; see one of the largest mosques in India at Fatehpur Sikri; and find respite in Mehtab Bagh, a serene park in the shadows of the Taj.

The magnificent structure dates back to the 17th century. Mughal emperor Shah Jahan was heartbroken after his beloved wife, Mumtaz Mahal, passed away during childbirth, and decided to pay tribute to her with a white mausoleum.

Construction took more than 20 years to complete with a manpower of around 20,000 laborers.

There’s never a bad time to see the Taj Mahal, but it’s worth getting here early—the building seems to radiate at sunrise. Tourists can enter the UNESCO World Heritage Site via the west and east gates.

Once inside, explore the ornamental gardens, which feature calming water features that reflect the Taj. Then, head inside the Taj itself and admire its perfect symmetry and white marble with elaborate floral carvings and semiprecious stone inlays.

Sightseeing around the Taj Mahal complex continues at the Kau Ban Mosque, west of the Taj, and the Jawab, a building intended to mirror the mosque and preserve symmetry on the main structure’s eastern side.

Sightseeing here is like wandering around a city within a city. The most extraordinary building at Agra Fort is Jahangir Mahal, a massive palace that blends stunning Hindu-inspired features (like overhanging enclosed balconies)

with Central Asian architectural elements (such as the signature pointed arches). Inside, tourists can see the gilded central court where royal women once passed their days.

Tourists can also check out a range of other noteworthy structures, including Anguri Bagh (a courtyard with a puzzle piece

-like outlines of gardens around water channels), Khas Mahal (a palace with pavilions made of white marble and red sandstone), Musamman Burj (an octagonal tower with intricate marble inlay work), and Diwan-i-Khas (a gathering hall featuring a pair of black and white marble thrones).

Agra’s exquisite structures: Itimad-ud-Daulah’s Tomb. The mausoleum contains the remains of Mirza Ghiyas Beg, a Persian official who served the Mughal empire, as well as his wife.

Legend has it that this jewelry box-like tomb was actually the inspiration for the Taj Mahal, earning it the nickname “Baby Taj.” The red sandstone and marble structure feature 13-meter-high hexagonal towers on each corner.

The most noteworthy thing about this attraction, though, is that it was the first structure to use pietra dura, the iconic Indian inlay technique that uses semiprecious stones to create decorative floral designs in marble.

You’ll see exquisite geometric patterns, depictions of vases and cups, and delicate flower bouquets from floor to ceiling of the graceful structure—reminiscent of those on the Taj Mahal.

Despite its beauty, Itimad-ud-Daulah’s Tomb gets far fewer visitors than other attractions around Agra, making it an ideal place to appreciate the lovely features without the crowds.

The Taj Mahal almost seems to extend across the Yamuna River at Mehtab Bagh (Moonlight Garden), a square garden complex measuring 300 meters on each side. It’s the only remaining park in a series of nearly a dozen Mughal-built gardens in the area.

The park has some pretty flowering trees and bushes—a stark improvement from its state in the mid-1990s, when the site was just a mound of sand. The Archeological Survey of India is hard at work restoring Mehtab Bagh to its original glory by planting Mughal-era plants.

The landscape aligns perfectly with the gardens of the Taj, making it one of the best places in Agra to get a view (or a photo) of the stunning structure—especially at sunset. Outside of the gates to the complex, you can shop for Taj Mahal trinkets and other souvenirs from sellers in the area.

The graceful attractions around Agra will make any tourist fall in love with the marble inlay. If you find yourself eager to take a piece of this craftsmanship home with you, head to Subhash Emporium. The boutique has a decades-strong reputation as the go-to place to shop for stone handicrafts in Agra.

Inside, you’ll find tons of travel-friendly marble inlay souvenirs, like floral coaster sets, animal statuettes, small boxes, and candle holders. The store also sells larger items, like lamps, tabletops, and carved-marble trays, that it can ship directly to your home.

Even if you don’t want to shop, it’s worth swinging by Subhash Emporium for its captivating demonstrations. The experienced craftspeople here will show you the precise art of inlaying small pieces of polished stone into hard marble—which might make the high prices of these items seem slightly more reasonable.

For nearly 50 years, emperor Akbar the Great ruled the Mughal kingdom, tripling its empire to include most of the northern half of the Indian subcontinent. His remains (along with those of two of his daughters) can be found at what is now one of the most popular tourist attractions in Agra, Akbar’s Mausoleum.

The complex features a marvelous sandstone and marble tomb with striking marble inlay in a variety of colors. The structure is surrounded by Mughal gardens that are home to deer, antelope, monkeys, and even a few peacocks.

If you happen to travel with a compass, whip it out at this site. You’ll notice that the tomb faces east—a contrast to nearly all other Mughal tombs, which point toward Mecca.

Just an hour’s drive from the Taj Mahal, Fatehpur Sikri makes for a worthwhile day trip from Agra. The city, once the capital of the Mughal Empire some 500 years ago, was built by Akbar as a salute to the famous Sufi saint, Shaikh Salim Chishti, who accurately predicted the birth of an heir. Residents abandoned the city not long after it was built when water supplies ran too low.

Tourists can now explore the well-preserved remains of this red sandstone ghost town, still surrounded by a fortification wall. Check out the Jama Masjid, a mosque and one of the first buildings finished in the city. Then, explore the three palaces, built for each one of Akbar’s wives. They combine a variety of religious-inspired architectural styles that honor women’s individual spiritualities.

Finally, get off the beaten path and stroll to Hiran Minar, a circular spiked tower covered with stone elephant tusks, atop which Akbar himself supposedly gazed at wildlife.

Dig deeper into this incredible site with a visit to the Archaeological Museum, near the Diwan-i-Am main gate. It contains four galleries filled with treasures from the Mughal era and beyond, including grey ware pot shreds, terra-cotta lamps, mini human heads in stone, jewelry molds, and much more.