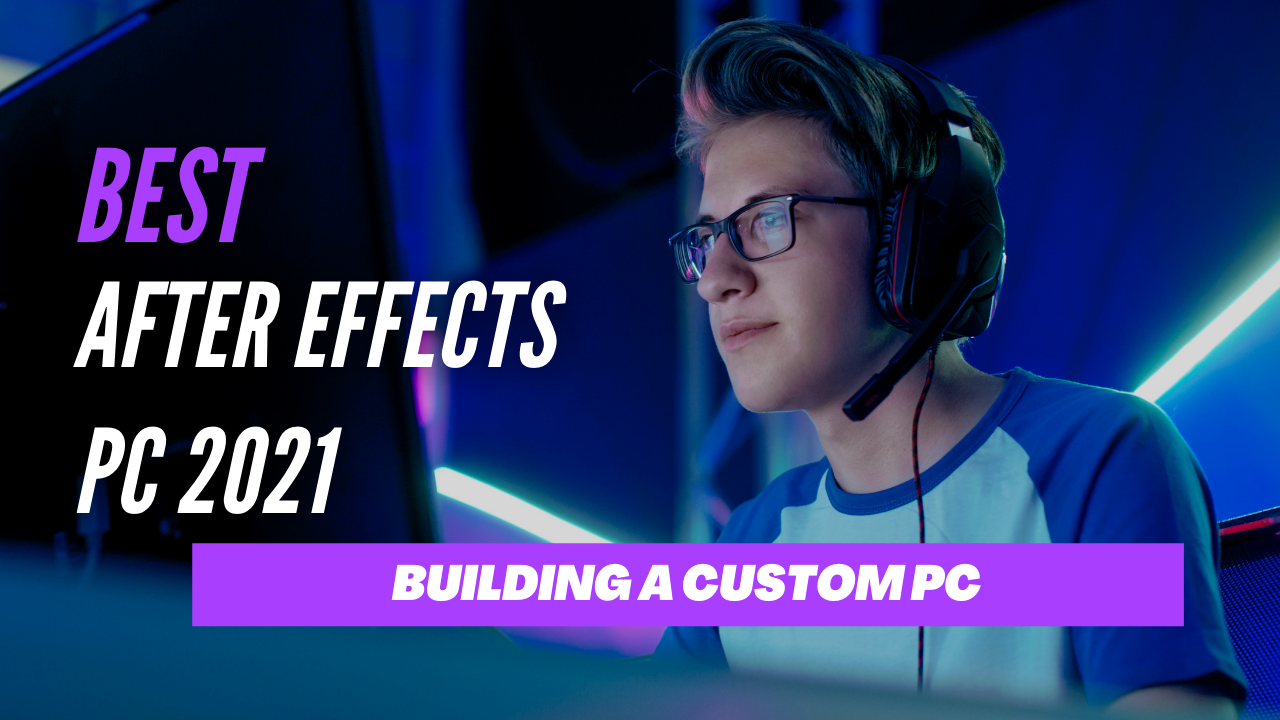 There are quite some factors to consider when building a new PC that is mainly targeted at After Effects use. Compositing & Motion Design are popular workloads within After Effects, that use a lot of resources.

In this article, I’ll show you what Hardware Components you’ll need for a top-performing After Effects PC & Workstation.

Let’s start out with identifying some of the typical workloads you might want to run when working in After Effects.

When you are planning on actively working heavily with this Computer I recommend a maximum single Core-Clock CPU such as the Intel i9 10900K or AMD Ryzen 9 5900X.

Best Recommended Processors For After Effects In Low Budget

Best Recommended Processors For After Effects In Hight Budget

The amount of RAM you will need depends a lot on what type of projects you are working on, what other programs you have opened at the same time, and what kind of Plugins you are using.

If you are using After Effects for lower-res projects that don’t go above 1280×720 and you work in 8Bit Color and your timeline isn’t too complex or long, you might get away with 16GB of RAM without noticing any slowdowns.

I wholeheartedly recommend at least 32GB of RAM for serious After Effects use though, better 64GB if your projects are in Full HD or above and you re working in 16 or 32Bit Color Depth. Especially if your Footage consists of multilayer EXRs or similar heavy footage you’ll need at least 64GB of RAM if you don’t constantly want to hit the purge button.

Best RAM specifications for After Effects

Be sure the RAM you chose is decently clocked, with 3200Mhz or 3600Mhz usually being the sweet spot of value. Look out for lower latency RAM such as CL14 or CL16 if your budget allows this.

Having at least two RAM modules makes sure they run in Dual Channel mode, giving you double the potential bandwidth for accessing your Memory. On HEDT Motherboards with chipsets such as x399, TRX40 or x299, you can double that bandwidth again (Quad Channel) if you have at least 4 RAM Modules hooked up.

Be sure to buy RAM Modules in Kits. The modules within a Kit are factory tested and guaranteed to run smoothly within that configuration of modules.

Recommended Memory (RAM) For After Effects 2021

After Effects involves footage, and if this footage is high-res and has a high bit-depth you’ll want to make sure to have fast storage. Multilayer, 32Bit EXRs, or RED Files are just some examples of typical footage that you use in After Effects.

You’ll greatly benefit from having a high-end storage device to make previews and rendering as fast as possible.

NVMe M.2 SSD such as the Samsung 970 EVO PLUS or PRO have excellent performance and outperform any SATA SSD by far.

The above chart shows you how superior an NVMe SSD is to HDDs or traditional SATA SSDs. Of course, this is sequential performance, but random read / write and higher queue-depths too are faster on NVMe Drives.

Here’s an excellent After Effects Build that is able to handle highly complex projects without any issues.

Since After Effects is badly optimized for CPU Multi-Core Usage, you’ll see better performance with CPUs that clock high vs CPUs that have lots of cores. The Intel AMD Ryzen 9 5950X which clocks at 346 / 4.9 GHz Turbo will give you a snappy active work experience as well as great rendering speed when exporting your compositions.

The beQuiet Dark Rock Pro 4 Air Cooler is among the best Air Coolers you can get and it will make sure the CPU stays below its thermal limits.

When using an overclockable CPU you should make sure the Motherboard supports this and has strong VRMs to deliver all the required power. The MSI Tomahawk X570 is an excellent choice for making sure your Motion Design PC-Build does not run into any Power-Limits.

As we discussed above, the Graphics Card isn’t as important in a PC-Build for After Effects.