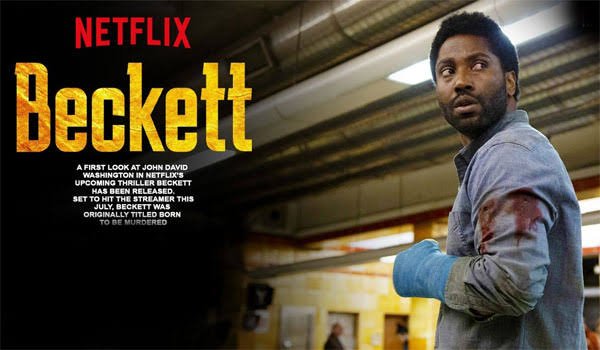 Beckett is a 2021 thriller film directed by Ferdinando Cito Filomarino. The film stars John David Washington as an American tourist vacationing in Greece who becomes the target of a manhunt after an accident, and must reach the embassy to clear his name; Boyd Holbrook, Vicky Krieps, and Alicia Vikander also star.

Beckett is an unusual Netflix original because it actually has an artistic quality to it. Its set in greece and really uses the greek culture and landscape to a point where you can feel it. The cinematography is so beautiful and so is the Sound design. The plot is gripping and you really will keep guessing how the hell this is happening to an ordinary man.

I’d always been having trouble figuring out if Washington is an amazing or just a mediocre actor, but he makes his best performance yet, if you ask me. He is not your typical fit action hero, that knows how to fight bad guys and he is often more lucky than skilled plus he has a more realistic looking body than most of these type of movies.

UNFORTUNATELY this movie has some plot holes and loses momentum at the end, which is a bit of a shame. The mystery that gets unravelled is a bit

Beckett, has to make his gruelling way from Ioannina through Kalabaka to the U. S. embassy in Athens. When he arrives he meets an embassy guy Tynan who tries to shoot him in a mall basement. For what reason exactly? This is where the story becomes fuzzy.

The viewer doesn’t really know why because the writer Ferdinando Cito Filomarino didn’t provide a definitive answer; the issues are unresolved at the story’s end (never mind all the running). Too bad because the viewer is left to his/her own devices. He/she might as well write the version that suits him/her. So, the viewer feels cheated.

Alicia Vikander’s star power isn’t put to good use here. She plays an inconsequential role. John David Washington lacks heft in this film despite his attempt to come up with a convincing performance

I want to point out some improprieties.

1) I found very unlikely that all rural habitants of Zagorohoria spoke english (while the nursery and the first policeman didn’t).

2) After a political assassination of the prime minister presumptive in his speech, deafening calm and quiet prevailed. In normal circumstances there would be red alert and curfew from local authorities.

3) Given medical condition of the protagonist during his chase, it’s unlikely he could do this immense trip.

Verdict: This isn’t a film that would be aided by a shorter run time so much as a pacing overhaul. Filomarino gets the few action scenes right in large part due to Washington fighting like a regular person. There’s no sudden shift to Beckett becoming a super solider, which adds to the suspense since there’s no guarantee he’ll win any fight.  Beckett needed more of those sparks of life to be a truly effective thriller.

John David Washington becomes an unwitting fugitive in a sluggish and illogical thriller. Beckett might have worked if the pacing, action, and characters were more developed.