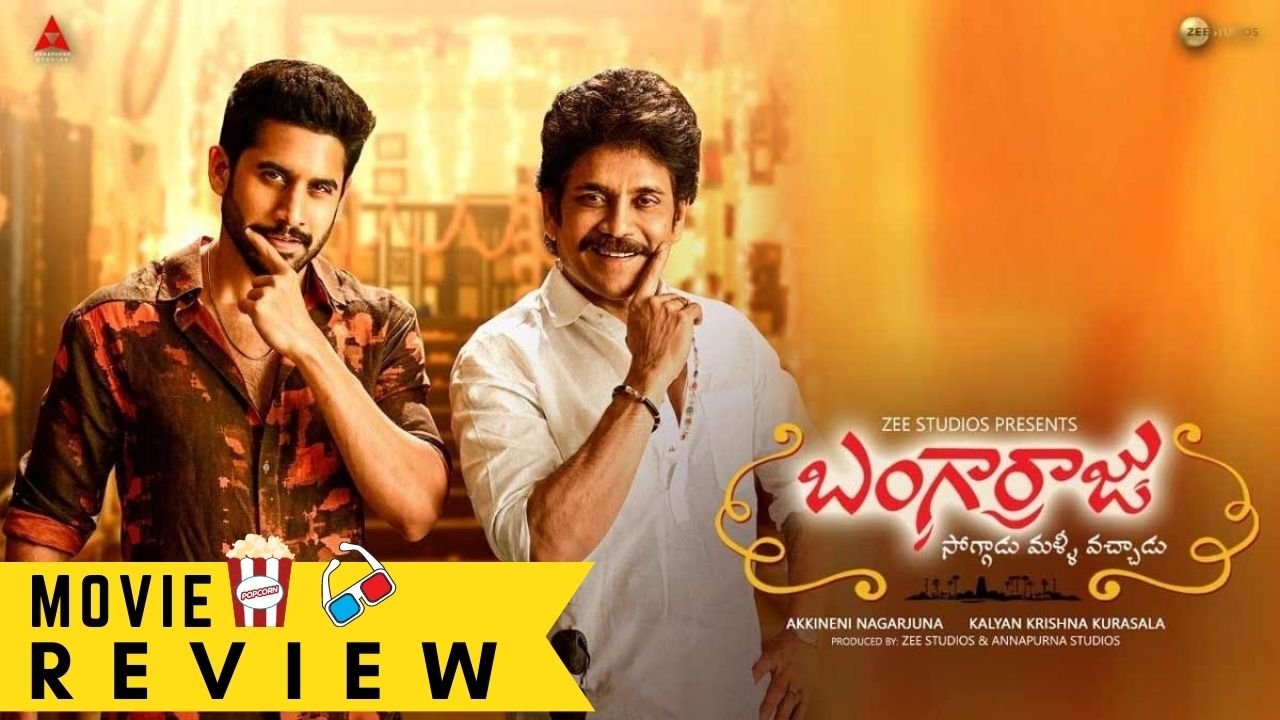 Bangarraju is the sequel to Soggade Chinni Nayana and has been promoted a lot in the last few days. It is the only big release this Sankranti and is out now. Let’s see how it is.

Bangarraju (Nagarjuna) goes to Swargam and keeps enjoying his life. One fine day, his wife (Satyamma) also passes away and joins him in Swargam. She then reveals to Bangarraju that his grandson (China Bangarraju) has become a Playboy and is not serious in life. She forces Bangarraju to go back to earth once again and set things right. If this was not enough, China Bangarraju also has issues with the main villains in the village. The rest of the story is as to how Bangarraju comes down and sets things right.

The basic festive atmosphere in the film is quite good and is a perfect set for the current Sankranti season. The rural backdrop and fun showcased will be loved by the family audience.

It is so lovely to see Nagarjuna and Chay Akkineni act on screen together. All the fun scenes, songs, fights, and emotions featuring them are a major highlight to the film.

Heroine Krithi Shetty gets one more solid role and she does well as Naga Lakshmi. She looks lovely in Indian attire and shares good chemistry with Chay.

Speaking of Chay, for the first time he has done such a vibrant character and is very good. Chay dons floral shirts and looks cute in all the songs and dance routines. Kalyan Krishna has showcased him quite well in all the action episodes.

Faria Abdullah, who does a special song mesmerizes the audience. Rao Ramesh is neat in his supporting role. Vennela Kishore evokes a few laughs. The climax fight is superb and has been designed quite nicely and is a treat for the fans and masses.

Last but not the least, Nagarjuna oozes charm in his role once again. This time, he takes the back seat and gives more screen space to Chay Akkineni. Ramya Krishna is also neat in her role.

The first half of the film is not that great. It starts on a good note as all the lead characters are brought out well. But from there, things get a bit dull.

Even though there was a good scope of comedy, the makers missed out on this aspect and added unnecessary songs featuring Nagarjuna and Ramya Krishna which disturbs the flow. The story is simple and has not many emotional moments during this part as well.

Anup Rubens gets major credit as his music is the backbone of the film. All the songs have been composed quite well and have been shot vibrantly. Dialogues are quite fun and especially those written for Nag are good.

Chay Akkineni has been designed quite well. The camera department does an able job as the film is filled with colorful village visuals.

Coming to the director Kalyan Krishna, he does a decent job with the sequel. But the first part, Soggade is more entertaining than Bangarraju for sure. Though he narrates the first half of Bangarraju in a dull manner, the second half is quite good with proper family emotions, drama, and a good climax.

On the whole, Bangarraju is a decent rural drama with Nagarjuna and Chay Akkineni dominating the proceedings. Even though the first half and story look quite ordinary, the second half is filled with good moments. As it is the festive atmosphere and the film is filled with multiple stars and vibrant songs, Bangarraju will fare well at the box office.