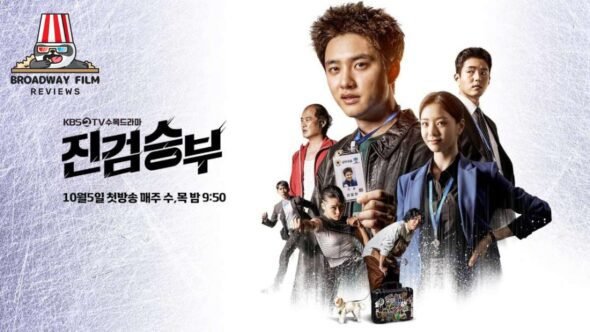 A story about a prosecutor named Jin Jeong (Doh Kyung-soo),  armed with badness and grittiness, breaking the sanctuary created by wealth and power. He chooses expediency over the law, trick over the standard, and defect over sincerity. He will provide a sense of exhilaration by punishing corrupt officials who are eating away at this society.

Jin Jung is a troublemaking prosecutor of the Central District  Office. With a strong sense of justice and craziness, he punishes criminals more than they deserve.

A Ra is Jung’s partner, a competent prosecutor who always judges issues objectively and handles them with a clean finish. Also at the Central District Office is the elite prosecutor Do Hwan, who believes money and power are everything.

He is a man who is willing to do whatever it takes to go higher up. In a world corrupted with wealth and evil, the story of these prosecutors unfolds.

Let me start off with the good things I liked about this drama. It’s funny. There are many action/fight scenes that I enjoyed. There’s a  cool group of friends that our male lead character Jin Sung can rely on 100% of the time.

The acting was great. I sense the anger,  annoyance, happiness, funniness, and frustration each character showed, and to end off, the Ost’s sounded great. Maybe not one I  would listen to in my spare time but definitely cool to hear during the episodes.

Some things I wished would’ve been better

* The writing for Prosecutor Oh: I like actor Ha Joon but this character did not give this actor justice. There was no sense of direction on whether he was good or bad. He’s supposed to be the main character but felt more like a side character.

If the end goal was for him to be a good guy from being a lapdog to the powerful, then at least show some character progression. Show that he realizes he’s been doing his job wrong. A quick 180 change doesn’t make sense to me if we don’t see a buildup change.

* Not much connection with the lead characters: There could’ve been a connection as to why Jin Jung became a prosecutor relating to his father’s incident but that didn’t happen, hence hard to connect and understand the actions of Jin Jung’s other than being crazy.

* Plot’s nothing new, doesn’t stand out: Pretty much corrupted bad guys being puppets by the true villain, taken down 1 by 1 until reaching the final boss.

It’s not a drama where it will draw you in the first half unless you’re a fan of D.O. I mean his acting is great as usual. It gets a little better in the second half once the puppets and the true mastermind get revealed and the good guys have the upper hand.

Besides the great actors/actresses and nice OTSs, there’s nothing that really makes this drama stands out to me. It was just missing a lot of backstories for me for our leads & even Jin Jung’s group of friends. An okay ending. Ends how it begins with Jin Jung being a crazy prosecutor.

When we see the words Prosecutors, Law, Corruption, etc, most likely we expect a very heavy Drama. “Bad Prosecutor” is not one of those. Is light, funny, and easy to watch. Grab a bucket of  Popcorn and have a nice Weekend!

Yashoda 2022 Review: “An Ambitious Action-Thriller Dragged Down By Senseless Execution”