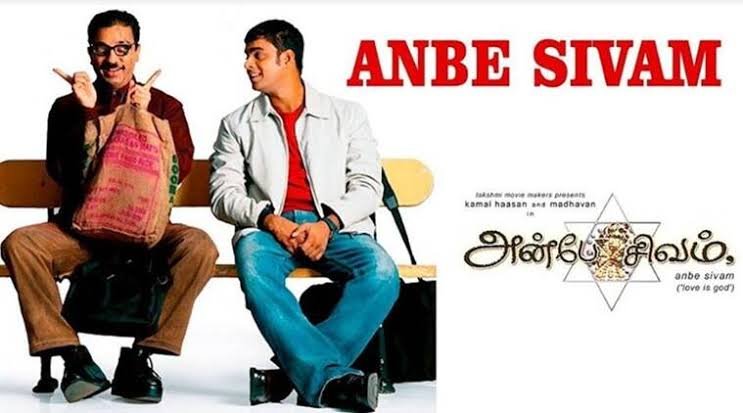 Why is Anbe Sivam regarded as the best movie in the history of Tamil cinema by many? Did this movie have any story at all? First of all is it a movie? No. Anbe Sivam is an experience, not only for one Madhavan but for another few thousands, who care to learn quite a lot of things and feel conceited about themselves, but fail miserably to confront the vagaries of life. What was the movie all about?

An experienced matured man and a squeamish, egotist but tender hearted youth (a typical modern day youth) travelling together from Bhubaneshwar to Chennai(East coast of India).Fate hinders their journey in all possible ways which Madhavan initially considers exasperating but later reveres as an experience of a lifetime. The story is as simple as that but the associated scenes,dialogues and the lessons learnt reverberate through your mind for a long time.

Be it the floods,train accident or the little boy’s death it is Madhavan who breaks down and get shattered. But Kamalhassan adapts himself and reconciles himself to reality and helps in the best possible way he can. While it takes a lot of effort for Madhavan to tell Kamalhaasan about his fraternal love towards him, Kamalhaasan finds it easy to tell ‘A.Ars, you are a go(o)d man’ (it’s not that easy to tell it to someone earnestly). From where did Kamal get this maturity?

The story moves into the flashback of Kamal,a communist, who loves the daughter of a capitalist, Nasser, whom he opposes as a worker regarding wages. When the duo decide to elope to Kerala for marriage, their bus meets with a gory accident. Kamal is badly bruised losing a limb and is totally disfigured. While struggling in bed for life, Nasser speaks extremely rude and blatant to Kamal. On conjuring up the scenes after the accident, he evaluates stark contrast of Nasser and the sister. Kamal sees god through the sister and sees it subsequently in quite a lot of people who propagate love.His outlook changes completely.

The first half with some lighter moments, the middle with some interesting dialogues and the last with some really shaking scenes Anbe Sivam stands tall amidst other usual Tamil movies.

Madhavan is extraordinary communicating the emotions powerfully(especially in the climax dialogue with Kamalhaasan). The one fight scene in the middle could have been avoided. Rather than going abroad for shooting songs, this movie has brought out some really excellent locations in India( not only in machi machi song).

The choice of season to shoot this movie has been brilliant with the monsoon accentuating the kind of feelings to be conveyed. Does the name ‘Anbe Sivam’ mean ‘Anbarase Nallasivam’ trying to say ‘All are one soul’? Kamal only knows. Finally, I’m sure it would not take any effort for anyone who has seen this movie to say ‘I love you Dr.Kamalhaasan’ for such an excellent story and screenplay.

An Experience Of A Life Time